How to Get Yourself Infected By Chronic Good Health 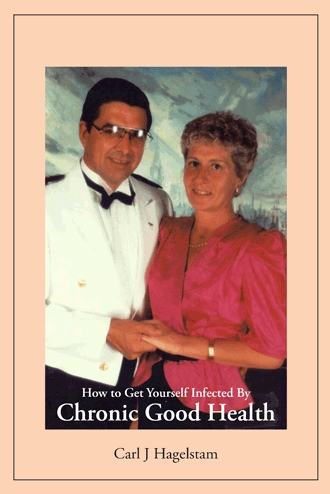 This book is about one man’s successful quest to reverse his cardiovascular disease and his wife’s stage 3 lung cancer in their own home without mainstream pharmaceuticals, chemotherapy, or radiation. Most importantly he describes the value of addressing ones overall health condition at a cellular level in order to avoid the lurking threat of developing any number of other diseases and conditions. While applying these therapies and procedures the only side effect ever noticed by the author and his wife appeared to be the gradual and steadily growing sense of good health. Although the author is not a licensed medical doctor, the therapies he and his wife strictly followed for heart disease and lung cancer are described here in full detail. You decide.

Captain Carl Hagelstam spent 30 years making his own decisions as a Master on board oceangoing ships and would not accept what his Cardiologist told him after his open heart surgery. "Your Coronary Artery Disease is irreversible and you will be on medications for the rest of your life!" An extensive research of natural alternatives ensued and important lifesaving findings were put to use. This happened in 2009 and 2010. His wife Viola was diagnosed with stage 3 lung cancer (NSCLC - Adenocarcinoma) in May 2012. The verdict from the Oncologist was grim: "You have 4 months to 4 years to live!" A six month period of radiation and chemotherapy followed, but to no avail! Once again alternative remedies were put into use, resulting in success. Both Carl and his wife are now free of both heart disease and cancer thanks to alternative remedies that they applied at home without any fuss and fanfare. Quietly and with ease, at a relatively low cost, they reversed their conditions. They no longer suffer from any symptoms of their "irreversible diseases". Captain Carl made copious amounts of detailed notes while he researched alternative natural treatments, with the intention to spread all this newfound knowledge to his family and closest friends. His notes accumulated and eventually resulted in this book, which can hopefully help not only his family and his closest friends, but other people out there as well!