Legacy of the Elder 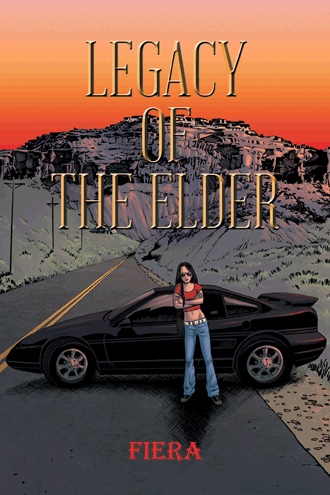 Worried that I’d entered an alternate universe, somehow slipping into a different dimension of time and space, I thought to myself, This would certainly prove string theory! Anastasia interrupted my pondering. “Were you ever curious about quantum physics before you learned Esperanto?” “No.” Narrowing my eyes, I asked, “How did you do that?” “You mean, read your mind?” “Yeah. How’s it happening?” “I simply perceive your thoughts as though they’re spoken. For me, it’s as involuntary as breathing. I’ve been able to hear human minds since the day I was born.” “What do you mean by human minds?” I was feeling creeped out again, and she knew it. “Look, Fiera, it’s probably best if we start at the beginning. Tell me, when did you first become interested in Esperanto?” “Well… when I was little, my mom told me that my name was an Esperanto word; so naturally, I wanted to learn more about the language. But I never had a chance until recently.” “And once you started learning Esperanto, you must’ve noticed the incredible ease of the language, insatiable cravings for more knowledge, a vastly improved memory.” “Y-e-a-h. I experienced all of those things,” I said, confused as to where this was leading. “These particular traits have come about because you were born with the Esperanto gene. The ‘E-gene,’ isn’t extremely rare (a lot of people have it); however, it usually remains dormant. It’s highly uncommon for a gene to activate, but when it does, the person (most often a young adult) becomes obsessed with foreign languages. Blindly driven by a compulsion to find their native tongue, they’ll go insane learning every language known to man if they never stumble across Esperanto. “You’re extraordinary, Fiera. Your E-gene was active at birth, but you somehow suppressed the desire to learn Esperanto until you were well into your twenties. Once you started learning the language of your ancient ancestors, your E-gene kicked into overdrive. Then, after your friend was killed, you started experiencing physical and emotional changes that even we don’t completely understand,” explained Anastasia. “Well, I’ve never heard of an Esperanto gene or been examined by a doctor for such a thing. And I know you’re full of shit because my ancient ancestors—anybody’s ancient ancestors, for that matter!—couldn’t have spoken Esperanto. Ludovic Lazarus Zamenhof just invented it in 1878!” Duh! Did she really think I was that stupid? Anastasia didn’t bat an eye. “Humans are unaware of the E-gene, and only our kind can detect an activated gene. When an E-gene is active, it emits an electric pulse called a guide signal that serves as a beacon to let us know where you are. It identifies you as having the ability to become one of us. “Zamenhof, like yourself, had an active E-gene when he was a child. That young genius was the first human to discover our language. Surely you don’t believe that a language as perfect as Esperanto could have been invented by a human! For centuries, Latin was mankind’s closest attempt at revealing what you know to be the international second language. In truth, Esperanto is the intergalactic language,” Anastasia elaborated. “What are you?” I asked, unsure if I really wanted the answer. “We are vampires,” she said proudly. I sat there, waiting for it to digest. Then I busted a gut laughing. “Damn! I didn’t see that one coming!” I snorted. “For a second there, I thought you were about to say ‘Aliens from outer space.’ But vampires? Well now, that’s a classic!” I sneered. Didn’t every kook claim to be a vampire these days? “We are vampires! And yes, Grandfather was in fact from another planet. I am not joking!” She looked annoyed, which made her eyes even scarier. “Okay, if you’re a vampire, show me your fangs.” I’m willing to give anyone a chance to prove themselves. “Fiera, real vampires don’t have fangs. I don’t know where humans came up with that foolish notion, but it would be next to impossible to find and pierce a jugular vein using two, long, awkward fangs.” She rolled her eyes and shook her head at the ignorance of humans. Pointing to her top front teeth, she said, “Our four maxillary incisors are as sharp as razors, and our saliva serves as both a local anesthetic (to numb) and an incredible sealant (to heal). Within a couple of minutes, any wound created by our mouths will seal up, healing without a mark—not even a bruise. All evidence of a bite completely disappears.” “Um… I like the new spin. But you’re never going to sell that story unless you can make it more believable.” Taking my left hand, Anastasia singled out my index finger. I felt no pain as she gingerly ran her front teeth along the length of my finger, laying it open—cut to the bone. I tried to pull away, but she grabbed my wrist, refusing to release me. As a stream of blood dripped down my arm, she eagerly licked it up like melted ice cream and finished by sucking my finger like a lollipop. When she let go, I stared in astonishment as the cut magically closed up and vanished without any scar. Oh yeah, she was a vampire!

Se vi povas legi ĉi tion, vi eble posedas la genon, kiu ebligas onin vampiriĝi. Mia nomo estas Fiera. Mi estas vampirino, kaj ĉi tio estas mia rakonto. Translation: If you can read this, you may possess the gene that enables one to become a vampire. My name is Fiera. I am a vampire, and this is my story. Fiera’s life has never been easy. Some days, just staying alive is tough. When she is rescued from prison by vampires, she thinks her circumstances are looking up. But there’s a problem. Even though the supreme commander of the International Federation of Vampires has made it perfectly clear that she’s not welcome in his underground world, that doesn’t mean she can leave. Fiera soon learns there are two kinds of vampires: legals and rogues. Legals have all the power, and as a result, the rogues suffer. They are expected to endure hate, inequality, and prejudice at the hands of legals—and after centuries of oppression, a nasty insurrection brews. War is imminent. Predestined to become the legendary fire goddess of the Elder’s prophecy, Fiera is told that her fate was sealed before birth. When she discovers that the one who has always loved her will die if she is made a vampire, Fiera is determined to change her future. Although published as fiction, Legacy of the Elder is the author’s true-life account of her personal induction into vampirehood. Informative, tragic, and funny, Fiera’s story explains and dispels the myths that haunt human folklore as it reveals the heart and soul of the lovable and despicable creatures we know as vampires.