Meeting the WORD in the World

Enjoying our place in God's Creation and discovering that we are a part of "God's workmanship, created in Christ Jesus to do good works, which God prepared in advance for us to do." (Ephesians 2:10) 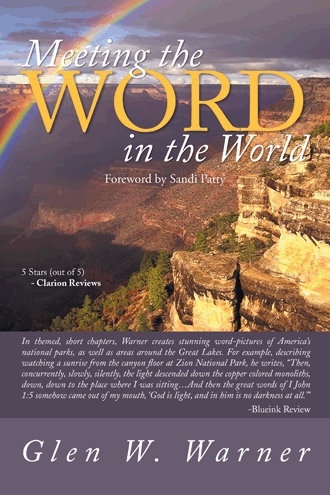 Sunrise at the lake is a wonderful meeting of eternity and the present moment. The western horizon is shrouded in a dark gray fog while the eastern horizon reveals a faint strip of golden, pink light. Gentle waves are making love to the shore. Here and there a fish jumps, breaking the placid surface of the water. A fishing boat with 8 men in it is gliding quietly out of the mist,, their night torches extinguished. A few gulls quietly and hungrily follow them. The rhythmic splashing of their oars is the only overture to the new morning's arrival. They had returned to their routine profession while gradually absorbing the power of the resurrection. The sky brightens gradually as the glittering golden blade of sunrise sharpens its edge against the receding darkness. One high cloud drifts silently eastward, its ragged prow fringed with crimson and golden glory. A solitary figure stands on the beach. Next to him is a small fire, smoke rising in a single, straight column. The boat is now only about a hundred yards from shore. "Early in the morning, Jesus stood on the beach, but the disciples did not realize that it was Jesus" He called out to them, "Friends, haven't you any fish ? No they answered. he said, Throw your net on the right side of the boat and you will find some." This was met with some skepticism since they had fished all night and caught nothing. However, thinking this stranger must have seen something, they did as he said. Their newly folded net was opened again and thrown. It belled out in the air and fell so precisely on the water that the small lead weights hit the water at the same moment making a circular splash. The stranger's advice was astounding ! We read that "When they did this, they were unable to haul the net in because of the large number of fish." By now the sun was spreading its glory across both the sky and the sea of Galilee. The top edge of the burning disk rose higher on the eastern horizon as a great new day fully dawned. Truth was dawning too on the disciples. John says to Peter "It is the Lord !" Not waiting for the boat to crunch up on the beach, Peter plunged into the water in ecstasy of joyful reunion. ...Yes, it is possible to see things with the eye of the mind, and quite something else to see with the eye of the heart. When both of these happen, truly, we can walk into a great new day of achievements with the Lord.

The handiwork of God (Psalm 19) and the workmanship of God (Ephesians 2:10) are mutual evidence of our Creator’s power and love. His written scripture and the scripture of nature both came into being though the WORD;”All things were made by him and without him was not anything made that was made.”(John1:3) When we read the Bible in the beauty of nature, new insights about God’s wonderful plan for our lives become living, reliable facts. This eternal wisdom touches our souls, and without it, we become less than gnats, with neither origin or destiny.

Glen W. Warner is an ‘internationally unknown” author! He has retired from mutually rewarding careers as a manufacturing marketing executive and as an Ordained Minister. He writes about his interest in nature travel and Christian faith. He and his wife Nancy live in Ashtabula, Ohio and Spartanburg, S.C. They are parents of Garth (Heather) and Bethany (Andre) and grandparents to Tyra, Jalen, Mac, Emma and Benjamin. The basic principle of this collection of meditations is the entering of ‘sacred spaces’. These are places where we may find God who is seeking a relationship with us and waits as long as it takes, for our acceptance of His love. These are not ‘holy real estate’ sites; they are simply times and places where we may find the lost peace and resolution that may have been submerged by uncertainty, lack of purpose, laziness or destructive behavior, causing chaos to seize your life.