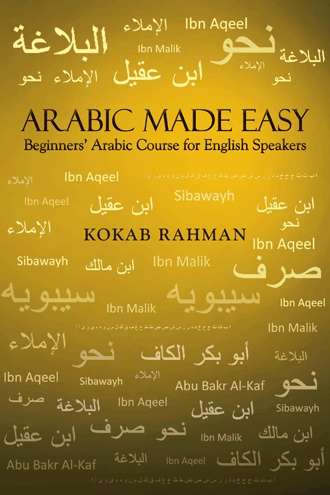 Supplement 10: Using the Arabic to English Dictionary There are many types of Arabic to English dictionaries available. Some are simple and concise. They contain fewer words than the more complex ones, but they are equally useful for the beginner student. One such dictionary is: Al-Mawrid Al Qareeb الْمَوْرِد الْقَرِيْب Arabic – English Pocket Dictionary In this and similar dictionaries you can search for verbs and nouns. To search for verbs, you need to look for the root form of the verb, which is the past tense of the verb. Most verbs in Arabic contain three-letter root forms while some verbs contain 4 letters in the root form. There are also verbs that contain 5 and 6 letters in the past tense but these verbs are derived from the 3 or 4 letter verbs. For example, the 5 letter past tense verb اِنْكَسَرَ (inkasara) is derived from the 3 letter verb كَسَرَ (kasara) which means “broke”. In concise dictionaries such as المورد القريب , you can search for verbs using their past tense, whether the verb contains 3, 4, 5, or 6 letters in the past tense. You can also search for nouns just as you would in any dictionary. For example, to search for the noun اِسْتِفْهَام (istifhaam), which means “inquiry”, you need to simply look up اِسْتَفْهَمَ (istafhama), which means “to inquire” . In simple dictionaries, you can also search for the noun (masdar مَصْدَر) of a verb, such as اِسْتَفْهَام . However, if you don’t find it, then look up the verb. There are also more complex Arabic – English dictionaries containing more entries than the concise dictionaries, such as the Hans Wehr Arabic – English Dictionary. In this dictionary, you can search for 3 and 4 letter root verbs easily, simply by looking up the past tense of the verb. However, to search for 4 letter past tense verbs derived from 3 letter verbs or 5 and 6 letter past tense verbs derived from 3 or 4 letter root verbs, you need to look up the 3 or 4 letter past tense root word. You cannot find these 4, 5 or 6 letter verbs just by looking up their past tense. Additionally, to look up nouns derived from verbs, even if the noun contains 6 letters or is apparently the noun of a 5 or 6 letter verb, you need to look up the main root of the verb, whether it is a 3 letter verb or a 4 letter verb. For example, the noun اِسْتِفْهَام (meaning inquiry) comes from the 6 letter verb اِسْتَفْهَمَ . However, the main root of the verb is the 3 letter verb فَهِمَ (fahima) , meaning “understood”. So to look up اِسْتِفْهَام you need to look up فَهِمَ and then search for اِسْتِفْهَام in the list of words derived from فَهِمَ . This sort of dictionary is more complex and more difficult to use. So beginner students should stick to the concise dictionary. However, having this dictionary is a good thing and should be used if you can’t find a word in the concise dictionary. Note: sometimes the concise dictionary will have one or a few common meanings of a word. In that case, you should look up the word in the larger complex dictionary because a word may have many meanings and to properly understand the text you are reading, you will need to know the appropriate definition which may not be the concise dictionary. Practice – get a concise Arabic – to – English dictionary and practice using it. Also, if possible, get a more complex dictionary for your reference library. Lesson 17: Negatives Vocabulary: تُفّاحَة apple أُرِيْدُ I want يُرِيْدُ he wants يُسَافِرُ to travel - he is travelling يَأْكُلُ to eat – he is eating Negative words used with verbs: The following words make the sentence negative. They are used with verbs. لَا لَمْ مَا لَنْ لَا is used with the present tense verb. It is for the present negative sentence. لا أدْرُسُ الآن. I am not studying now. لا أريد I don’t want (it). لا أريدُ أنْ أدْرسَ. I don’t want to study. لَا أَذْهَبُ I am not going. لا أذْهَبُ إلى السُّوْقِ الْيَوْم. I am not going to the market today. You can make negative sentences by simply placing لَا before the present tense verb. For example: I am studying now. أَنَا أَدْرُسُ أَلْآن. I am not studying now. أَنَا لَا أَدْرُسُ أَلْآن . He is eating an apple. هُوَ يَأْكُلُ تُفَّاحَة He is not eating an apple. هُوَ لَا يَأْكُلُ تُفَّاحَة. They are travelling. هُمْ يُسَافِرُوْنَ They are not travelling. هُمْ لَا يُسَافِرُوْنَ Note: this lesson discussed لا when it is used with the present tense verb. There are also cases where لا is used with a noun. You will learn those types of sentences later, insha-Allah. Sentence Analysis: I am not studying now. أَنَا لَا أَدْرُسُ أَلْآن . أَنَا : stand-alone subject pronoun mabny in the mubtada (subject) position. ضَمِيْر مُنْفَصِل مَبْنِيّ فِيْ مَحَل رَفْعِ مُبْتَدَأ لَا : negation word. حَرْف نَفِيْ أَدْرُسُ : present tense verb marfoo’ and the sign of رَفْعِ is the damma visible at the end. فِعْلٌ مُضَارِعٌ مَرْفُوْع وَ عَلَامَةُ الرَّفْعِ الضَّمَّةُ الظَّاهِرَةُ عَلَى آخِرِهِ أَلْآن : word showing time. ظَرْف زَمَان مَنْصُوْب Practice tip: make present tense negative sentences.

Kokab Rahman is a talented writer, having written many non-fiction articles, how-to-write articles, cultural short stories, and poetry - all loved by readers. One of her short stories, Cyber Lies - the Reality of Internet Relationships, won the 2010 Islamic Board Writing Contest. Several of her articles on the craft of writing were published in the Kansas Writers' Association Newsletter. She has also written course books including English Grammar for Grade 5, Accounting for Beginner, and Arabic Made Easy. The preliminary version of Arabic Made Easy (known as EZ Arabic) was posted on Islamic Board Arabic Forum and was well-received. Being a linguist as well as a talented writer, she is able to present difficult Arabic Grammar material in a simple and uncomplicated manner. Using repetition of difficult material and simple manner of presentation, Arabic Made Easy makes learning Arabic extremely easy. In addition to writing, Kokab is a professional editor and teacher. She provides critiques to aspiring writers, helping them improve their writing.