A Heroic Journey from Crippling Paralysis to Extraordinary Success 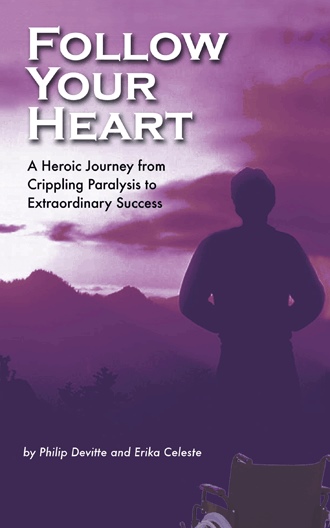 Incense hung heavy in the air. Father Mark walked slowly down the center aisle swinging the thurible as blue wisps of smoke played about him, curling around his head and shoulders. Somewhere in the rafters church bells rang out long and low, signaling the beginning of the service. Rain fell on the slate roof punctuating the priest’s every step with a soft ping, ping, calling the gray of the Seattle morning into the dark sanctuary. A soprano joined with the rain in a mournful rendition of Ava Maria. First sweet and low, the melody grew in strength, ushering in an unending queue of parishioners. Looking down at the little scene below me struck a chord deep within me. It touched my very soul to see how many family and friends had come: Mom, Dad, my older sister, Stephenie, younger brother, Rick, and their families; my childhood friend, Curtis, a few Eagles, people from the hospital, and many others I wasn’t even sure I could name. A lump rose in my throat when I spotted Ellen, my wife, in the front row. Her head was bowed, but there was no mistaking her fiery hair against the deep navy of her tailored suit. When she raised her head, the glint of tears sparkled in her eyes. I loved her with all my heart for being loyal to the end. I’d put her through more than any one person deserved. We’d lived a hell beyond most people’s worst nightmares, filled with enough pain and uncertainty to last many lifetimes. To truly appreciate the significance of my actions and their impact, we must turn the clock back to see how all of it and much more led me to where I was... I was excited to get back to the gang at work after a week off between Christmas and New Years. 1985 was going to be my year, I thought as I straightened my favorite red Italian tie. I had a gorgeous redhead for a wife, we’d just moved to the apartment of my dreams overlooking Lake Union in Seattle, and I’d just bought a BMW 320i. I’d always wanted a European car. This one had a sunroof and great stereo complete with graphic equalizer. The icing on the cake was that it was ice blue, my favorite color. Jay hopped up on the counter and meowed in hopes of a treat, while I prepared a to-go mug of dark roast. Princess echoed her brother’s request, winding between my legs. “Not now, guys,” I said, shooing them away with gentle pats. I brushed the cat fur from my charcoal gray, French suit, double-checked the contents of my briefcase, and headed for the elevator. I smiled to myself imagining the looks on everyone’s faces when I made it to our insurance agency early, Dad’s especially. He was a good boss, but rode me hard. “Smile when you answer the phone,” he’d remind me if I looked too serious during a call. Shaking my head, I caught the reflection of myself in the elevator wall—just under six feet tall, built like a gymnast, light brown hair, and blue eyes. At a quick glance, the figure in the hazy metal might be mistaken for my father. The floor bell dinged and I headed out to my new love. It was one of those sunny winter days that looked deceivingly warm despite being crisp and cold. But that didn’t matter to me. In a town that was known for its rain, sunny meant one less day to worry about keeping my new baby clean and shiny. Light traffic was already buzzing along the freeway. If I hurried I could beat the hustle and bustle of commuters, which inevitably turned the fast, flowing river of vehicles into a mucky, morning bog. The engine purred to life. I guided my BMW onto I-5. There was a dusting of snow on the ground, but the roads were dry and clear. No one seemed too anxious to be getting back to work after the holidays, so we all zoomed along at a regular speed. I enjoyed my coffee and listened to the radio, patting myself on the back again for starting out early enough to make it in on time. I could get use to this no rush stuff, I thought lighting a cigarette. It was nice to take my time and do it right instead of scrambling and being stressed out when I arrived. I switched lanes to prepare for my exit and hit black ice. Before I knew it, I was spinning hard and fast across four lanes of traffic. It was like an amusement park ride out of control. Cars were flying at me, yet somehow stayed out of my path as I wildly careened, then cartwheeled my BMW. The harder I tried to steer, the faster I spun. Shit! I thought as I helplessly tumbled like a ragdoll. There was no getting out of this one. When I saw the car head for the shoulder I knew it would be over soon. I held onto the steering wheel for impact. Whatever happens, happens. All of a sudden there was nothing to be done and nothing to fear. I closed my eyes and went limp. Time and sound stood still. The next thing I remember I was flying through the air in slow motion. The whole thing was quite eerie like Alice in Wonderland going through the looking glass to another life, but it wasn't Alice. It was me. Snow crunched beneath me as I dropped to the ground and rolled across a grassy knoll, chased by the metal scream of my sliding car. Then all was silent. Holy shit, I thought, closing my eyes, I’m alive and there’s not a scratch on me! I turned my head and saw my beautiful car in pieces less than a foot behind me and closed my eyes again. She’d nearly crushed me. Talk about lucky!

Follow Your Heart is the story of one man’s defiance of his fate and his heroic efforts to stand on his own two feet again. Philip shows how we can stand up in the face of adversity and still achieve extraordinary success.

Philip Devitte devotes considerable time these days advocating driver safety to young people. A former director of Think First in Palm Springs, he has given many motivated speeches to students in California and Washington about the dangers of unsafe driving habits, and the importance of believing in themselves even when the odds are against them.