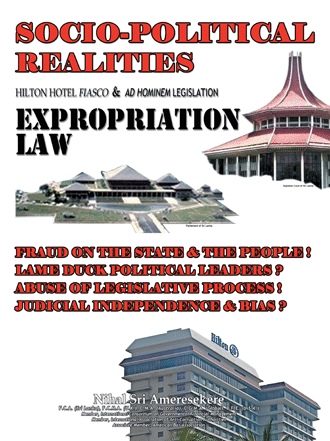 FIn fact one day, when I, among others, was before a Meeting of the Cabinet of Ministers of Sri Lanka, chaired by President J.R. Jayawardene, with the attendance of Prime Minister R. Premadasa, I was called upon to afford requisite clarifications and explanations on the Colombo Hilton Hotel Project; and at the very end of such brief interaction with some Ministers of the Cabinet, quite significantly President J.R. Jayawardene queried from the Minister of Finance & Planning, Ronnie de Mel, who had been ominously silent in our presence - “ Ronnie any further questions ?”. Surprisedly, he had none !

Appallingly, this Letter dated 5th February 1993, which was after the delivery on 2nd December 1992 of the Judgment by the Supreme Court of Sri Lanka, the highest judiciary of the country, had taken a completely diametrically different stance, to the stance which had been taken in the following Letter dated 17th December 1990 sent by the very same K.H.J Wijayadasa, Secretary to President R. Premadasa, himself, addressed to R. Paskaralingam, Secretary, Ministry of Finance & Secretary to the Treasury, only after only ex-parte Enjoining Orders had been issued on 17th September 1990 by the District Court of Colombo. This amply demonstrates the servile subservience of pontificating senior public officers, advocating good governance in the public domain !

On 8th April 1994, G. Wijayasiri, Director General, Economic Affairs, Ministry of Foreign Affairs of Sri Lanka, had addressed a Note under the subject `Hilton Hotel' to the Secretary, Cabinet Sub-Committee on Investments, forwarding an `extract' of the Note dated 24th March 1994, which had been prepared by the State Secretary, Ministry of Foreign Affairs, R.C.A. Vandergert, on the aforesaid discussion he had had with I. Hashimoto, Chargé d' Affaires of the Japanese Embassy in Sri Lanka, the contents of which are appallingly shocking !

Mr. I. Hashimoto, Charge de Affaires a.i. of the Japanese Embassy in Colombo, recently called on Mr. R.C.A. Vandergert, State Secretary, Ministry of Foreign Affairs. During their discussion the Charge de Affaires made reference to the Hilton Hotel dispute.

I am sending herewith an extract of a note prepared by Mr. Vandergert, on his meeting with the Japanese Charge de Affaires. I shall be glad if this is brought to the notice of the Cabinet Sub-Committee on Investment at its next meeting.

Last afternoon Mr. I. Hashimoto, C.d'A. of Japanese Embassy, called on me.

2. While it was predominantly a courtesy call, he referred to the following matters, which I think need a studied response from the appropriate agency of government :-

i. Referring to the ethnic conflict and the expressed intentions of the Government to negotiate with the LTTE, he said he was thinking aloud about what the reaction of the Government would be if Japan was to offer itself as a venue for talks between the representatives of the Government and the LTTE. He thought that such a meeting away from the public glare, might provide a conductive atmosphere for such talks. I replied that he should make this proposal to AIR since these matters were being handled by the Presidential Secretariat.

ii. Mr. Hashimoto also brought to my notice the concern of the Government of Japan and Japanese investors in regard to the Hilton Hotel dispute. He said that in view of the importance which Sri Lankan Foreign Policy attaches to attracting foreign investment, the Government should look at the overall impact which disputes like the Hilton Hotel dispute would have on Sri Lanka-Japan bilateral economic relations and, more particularly, the adverse impact it may have on Japanese investors who might feel that in situations of this nature, the government was not doing enough to help resolve such issues. Since the overall looser would be the country itself, he thought that in matters like this the Government should become more involved, without leaving it to private arbitration or even negotiations conducted by BOI etc. I said I would convey his concerns to the appropriate authorities.

The foregoing to me was in very plain and simple terms nothing but pure blackmail and a threat akin to holding to ransom at gun point, and thereby to inhibit the enforcement of the rule of law in a sovereign country, to prosecute a major fraud schemingly perpetrated by the Japanese Companies, Mitsui & Co. Ltd., Taisei Corporation and the Japanese Architects Kanko Kikaku Sekkeisha Yozo Shibata & Associates, on the Government of Sri Lanka and its people !

The Special Presidential Commission, adverting to the Supreme Court (Conduct of and Etiquette for Attorneys-at-Law) Rules, in the said Postscripts, inter-alia, stated thus:

"We are of the unanimous view that in this respect he [reference being to the said K.N. Choksy] has stated untrue, erroneous and false facts, which necessarily has the tendency to mislead and deceive the public in general, and the members of this Commission" 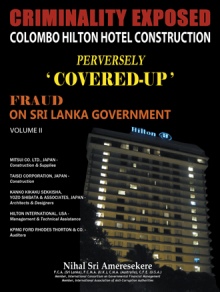 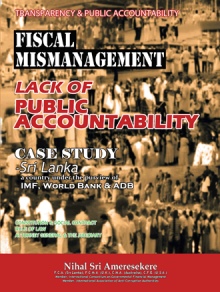 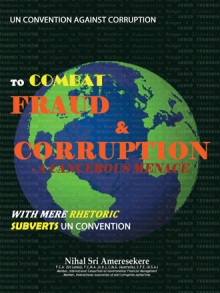 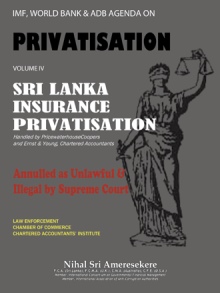 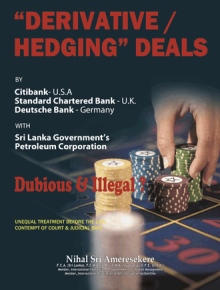 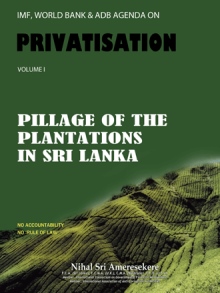 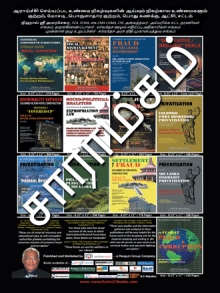 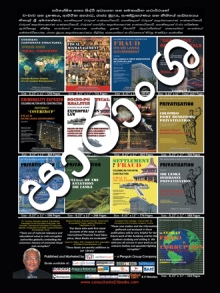 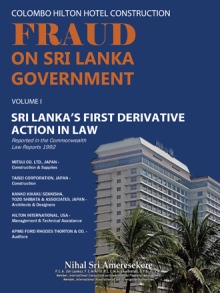 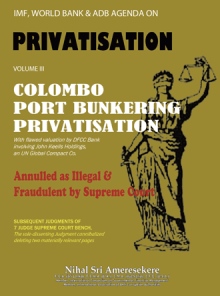 `Socio-political realities' at the highest levels in society are lucidly revealed by the Author documenting real life experiences, in interacting with Presidents, Prime Ministers and Ministers, demonstrating their subservience to international pressures by influential powerful countries, and their shameless shielding of fraudulent/corrupt Ministers/Officers. Author discloses non-enforcement of the rule of law, even by Attorney Generals, against those affluent and powerful, eventhough the rule of law is the cornerstone of democracy. There is shocking revelation, of how Japanese Government, through Diplomats, pressurized to settle and cover-up a colossal fraud, blatantly perpetrated on a country and impoverished people, to prevent criminal prosecution thereof; even inducingly offering to negotiate with a terrorist organization, to resolve the issue of armed terrorism, ironically created by social injustice, including economic terrorism. Constitutional Minister, President's Counsel, charged for fraud utters blatant falsehoods. Justice Minister and Foreign Minister, President's Counsel, both scholarly alumni of Oxford University, camouflages to whitewash fraud, taking duplicitous stances. This Book is in two Sections, one dealing with `Political and Diplomatic Hypocrisy', and the other on an `Ad Hominem Legislation - Expropriation Law', enacted in violation of UN Universal Declaration of Human Rights, and ultra-vires the Constitution. How the country's highest judiciary deals with challenges to the perverse legislative process is revealing, with shocking disclosure of the Chief Justice's husband being given plum political office, with a scandalous controversy exploding in the public domain; just as the Author applies for a review of the pre-enactment Determination by Chief Justice for such Statute, as having been made per-incuriam and ultra-vires the Constitution, adducing additional grounds of perceived bias, upon which Their Lords of Appeal exercising inherent jurisdiction, in similar circumstances, rescinded a previous Judgment of the House of Lords in extradition proceedings re - Chilean President Pinochet.

Nihal Sri Ameresekere, F.C.A. (Sri Lanka), F.C.M.A. (United Kingdom), C.M.A. (Australia), C.F.E. (United States), is a Member, International Consortium on Governmental Financial Management and a Member, International Association of Anti-Corruption Authorities. Former Advisor, Ministry of Finance and Chairman, Public Enterprise Reforms Commission Sri Lanka. Has functioned as Senior Consultant on World Bank and USAID funded public sector economic reform projects. A multi-disciplinary professional, exposed to private and public sectors, and a public interest activist, with wide international exposure. Not a legal professional, yet has appeared in person before the Supreme Court, successfully advocating public interest litigations. He is a forensic accounting investigative specialist. Has dispassionately spoken out on matters of national and public interest. Ardently upholds the sacred precept, that public property is solely of the people, and managed in fiduciary trust by governments; transgression of which he has committedly combated.

Has published exposés into transactions carried out, under the aegis of IMF, World Bank and ADB privatization agenda, incisively analyzing real case studies, exposing the shockingly dubious manner, in which privatizations have been perpetrated by the highest levels, disclosing the alarming indifference of international developmental agencies, completely eroding public confidence, crucial for meaningful privatization, to foster a free economy, characteristic with transparency.

He emphasizes that `economic terrorism' germinates `armed terrorism', resulting in violation of human rights. `Concerns of humanity, transcends interests of nationality', he propounds; and that poverty alleviation schemes merely replace, at the cost of the poor, their own resources pillaged and plundered by socio-politically influential. Politicians vigorously campaign on election platforms, vociferously decrying fraud and corruption, vowing stringent action thereon. However, upon assuming office of government, get bogged down in the very quagmire of fraud and corruption, invariably peddled by powerful multinationals - as lucidly demonstrated through a series of other publications on his real life experiences thereon.