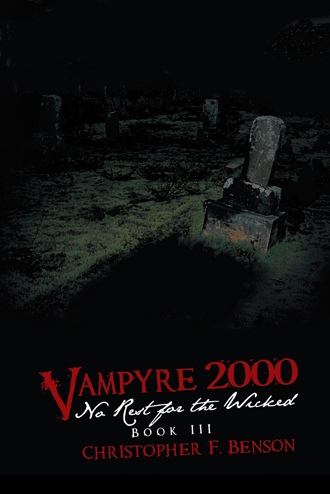 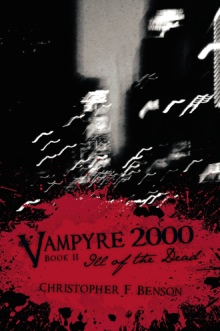 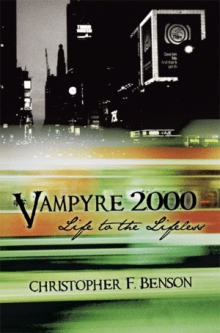 In the third book of the Vampyre 2000 Series, Vampyre 2000: No Rest for the Wicked, Rita and Cornelius appeared to be living their afterlife happily ever after. Months after becoming vampyre, Rita had become well-adjusted to her new nocturnal lifestyle. They were both enjoying the relative peace and quiet of an undead life together when a violent and brutal murder, which had been captured by a security camera, was broadcast on national television. The news media quickly dubbed the vicious murderer ‘The Vampire Killer’. However, no one would have ever imagined that she was anything more than just a psychotic and deranged killer. But Cornelius knew exactly what she was. She really was a vampire. As much as he would have liked to forget, Cornelius once had a history with this woman and they had been romantically involved. But there would be no joyful reunion; memories of her brought only pain and suffering to his troubled mind. Her reappearance symbolized the darkest period in his long life of two hundred years. Because of her the life that he once knew had come to an abrupt end. With the aid of a Police Officer (Detective Simpson), Rita and Cornelius leave The Old Victorian behind and embark on an exhausting journey that would take them from one side of the country to the other. With some unfinished business and an old score to settle, Cornelius was going home for the first time in over two centuries. Vengeance has a name and it knows no boundaries.

Chris grew up in Idaho Falls, ID. And he has always had a fascination with vampire stories and folklore. As a child, he was an avid reader of science fiction and fantasy; some of his favourite authors were H.G. Wells, Isaac Asimov, Peers Anthony, Anne McCaffrey, J.R.R. Tolkien, Stephen R. Donaldson and Terry Brooks. Finding an appreciation for the classics in college, Chris enjoyed Paradise Lost, Dr. Faustus, Beowulf, Dante's Purgatorio, Inferno and The Iliad. He studied Architecture and History and acted extensively including several Shakespearean plays. After graduating from Texas Tech, he began working as an Architectural Designer in San Francisco, CA. and later, San Antonio, TX. A few years after returning to Idaho, Chris followed his dream and began his write his first novel. VAMPYRE 2000: Life to the Lifeless is a unique look into the life of a two-hundred year old vampire and was first published in July of 2010. Almost immediately people fell in love with Cornelius and Rita, the main characters and eagerly awaited the release of Book Two, VAMPYRE 2000: Ill of the Dead. Because of people’s genuine enjoyment and ongoing interest in the series, Book Three, VAMPYRE 2000: No Rest for the Wicked was published and continued the modern saga of these realistic vampires.