Why is it dark at night? 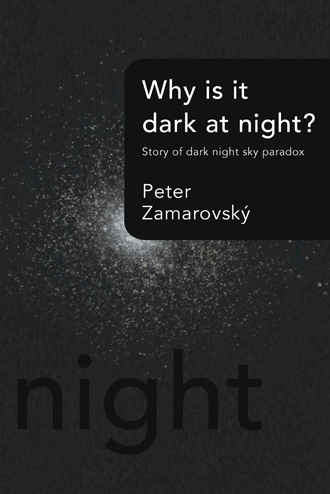 When the sun falls beneath the horizon, darkness fills the sky above our heads. Why? Why is the sky dark at night? If you don’t know, don’t worry. Scarcely anyone knows. And those that don’t probably don’t realise they don’t know, because they’ve never asked themselves the question. “Why is it dark at night?” is a question that, for centuries, not even philosophers or natural scientists asked themselves. Neither did astronomers, who should have been best equipped to tackle it. The night sky has fascinated the human race since time immemorial. Our attention is drawn by everything we can see in the sky, everything that glistens and moves there. What is that glow? What does it consist of? What makes it move and why? But most of the night sky is covered in empty darkness. It doesn’t glisten and it doesn’t move. It consists of nothing. It is not anything real, just absence of visual perception. Darkness forms only a monotonous backdrop, in front of which the cosmic theatre is played out. It was not until the Renaissance that astronomers realised that darkness is self-evident only in terms of our daily – or rather nightly – experience. In terms of the structure of the universe it is not self-evident at all. So it’s not without interest. What was self-evident ceased to be so and became a mystery instead. A paradox came into existence. Astronomers started to look for an answer to the question “Why is it dark at night?” It was sought by Kepler, Digges, Galileo, Halley, Olbers and other astronomers. And not just astronomers: even the philosopher Friedrich Engels was interested in the question and the famous author Edgar Allan Poe tried to find an answer. The question of darkness at night continued to occupy the minds of cosmologists in the twentieth century. Is it still topical now in the twenty-first century? Let’s go back to the beginning and ask ourselves the question: Why isn’t it obvious that it is dark at night? Why oughtn’t it to be dark? And why is it dark nevertheless? The mysteriousness of obvious phenomena eludes us. We are not surprised by them and don’t investigate them. If they are to surprise us we have to render them “non-self-evident”. It was a long time before human beings were interested in why things fell, and why they fell just in one direction. It only ceased to be self-evident when that famous apple fell on that distinguished head. That led to enlightenment: gravity was no longer self-evident and it became a matter for reflection and investigation. (The reader is no doubt aware that the head in question belonged to Isaac Newton.) The situation with magnetism was quite the opposite; ever since ancient times people had been amazed by magnets. Thales of Miletus, known as the first philosopher and naïve materialist, was amazed by magnetism to such an extent that he abandoned his “materialism” and offered gods and souls as an explanation of the phenomenon. And magnetism continues to fascinate even now. It became mysterious and magical because it was an unusual phenomenon. But like gravity, there was nothing curious about darkness – after all we encountered it even before we saw the light of the world. Billions of alien suns, or why it ought not to be dark at night If we look around us in the forest, what do we see? Trees upon trees. Whichever direction we look in, we see a tree. Trees fill the entire field of view around us (at ground level, at least). And the same should apply to the forest of stars in cosmic space: there should be one shining in every direction. Stars should cover the entire vault of heaven, with no dark spaces. And since Kepler was right when he assumed that the stars are alien suns like our own Sun with a capital S, their surfaces glow like the surface of the Sun. And so we should be surrounded by unbearable glare and heat. There should be no night and no day, just an inferno. Here we come to the crux of the matter: the fact is that at night there is neither light nor an inferno. It is cool and dark, and there are no fires of hell. (This refers to our properly heated central-European Hell. The Hell of the Nordic nations is an icy wasteland.) We are confronted with a contradiction with reality known as the dark night sky paradox. It is also called the photometric paradox, Olbers’ Paradox, and sometimes Kepler’s Paradox, Halley’s Paradox, and surprisingly also the “light sky paradox”.

“Why is it dark at night?” might seem a fatuous question at first sight. In reality it is an extremely productive question that has been asked from the very beginning of the modern age, not only by astronomers, for whom it is most appropriate, but also by physicists, philosophers, and even poets. The book you have just opened uses this question as a pretext to relate in the most interesting way the history of human thought from the earliest times to the here and now. The point is that if we want to appreciate the magic power of this ostensibly naïve question we need to discover how it fits into the wider context of the natural sciences and learn something of the faltering steps towards an answer. In doing so the author guides us through periods that we regard as the dim and distant past. However, as we start reading these passages we are amazed to discover just how searching were the questions the ancient philosophers asked themselves in spite of their fragmentary knowledge of the universe, and how clairvoyantly they were able to gaze into its mysterious structure. The author goes on to explain very graphically how this increasingly prickly question was tackled by many great men of science. It is bound to come as a surprise that it was not a philosopher, a physicist or an astronomer, but instead the poet Edgar Alan Poe, who hinted at the right answer. I know of no other similar publication that has dealt so graphically or so succinctly with a question which, after four centuries of fumbling and chasing up blind alleys, was only solved in our lifetime. Jiří Grygar, president of Czech Learned Society, honorary Chairman of the Czech Astronomical Society

Peter Zamarovský (1952) comes from Prague, a city with a rich history of Czechs, Germans and Jews, a city where the famous astronomer Kepler made his most significant observations and where Danish astronomer Tycho Brahe found his last rest, a city in which Einstein started to formulate the ideas underlying the general theory of relativity. Inspired, perhaps, by the spirit of the place, Zamarovský studied physics at Charles University, and he now lectures in philosophy and physics at the Czech Technical University in Prague. He is chairman of the European Cultural Club, which, for over twenty years, has organised public panel discussions on topical issues related to various fields of science, philosophy and art. He is active in the historical section of the Czech Astronomical Society and in the Sisyphus Sceptics Club. Zamarovský has written many scientific and popular papers and three books. He also offers popular lectures on various themes in science and philosophy. He has been invited to participate in numerous radio and TV programs. His favourite saying is Hans Reichenbachs “The path of error is the path of truth.“