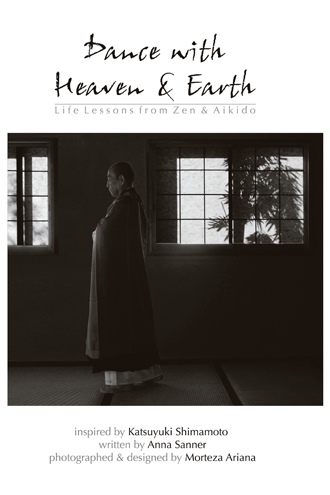 Pray and promise to try. Always accept gratefully. Seek good form and good attitude. Be yourself and respect others. Practice hard and give birth to beauty. Dance. Take each fall gratefully as an opportunity to practice getting up. Sit and be silent. Connect with yourself, with others, and with the world. Create harmony.

The texts in this book are inspired by the teachings of Katsuyuki Shimamoto, 8th dan, who has been a Zen priest and aikido teacher for 50 years. The title is taken from a poem that frequently graces his calligraphies:

Harmonize with Heaven and Earth

Dance with Heaven and Earth

Humble and congenial, Katsuyuki Shimamoto is a perpetrator of aikido as a martial art of peace that seeks to create harmony. Influenced strongly by Zen, he emphasizes good posture, calm breathing, universal acceptance, simplicity, and minimalist aesthetics.

These short pieces of wisdom taken from aikido and Zen help us understand that living with others is what allows us to live at all. That the right form - including posture, field of vision, and breathing - can change not only our outlook but the outcome, too. That we can neutralize any attack once we learn to accept it. That true victory is to win against our weaknesses, and fighting only serves as a stepping stone towards harmony. That with the right approach, the very life we struggle with can turn into the greatest treasure.

Photographer and designer Morteza Ariana has not only given the book a beautiful look but also contributed significantly to conveying its message by adding a visual component to its expression. His breathtaking original photographs resonate with Katsuyuki Shimamoto’s sense for Zen aesthetics and clarity of communication. Every text is juxtaposed with one of these images, adding another dimension to its meaning, and often alluding to the contradictory nature of Zen teachings intended to help practitioners overcome the boundaries of reason.

Get ready for a book that takes you straight to the heart of the matter. Dance with Heaven & Earth!

Anna Sanner, born 1980, holds an MA in Interpreting & Translating Japanese from Bath University. Her martial arts background is in karate and aikido. She studied aikido under Katsuyuki Shimamoto for 5 years and has accompanied him on numerous teaching trips to Canada, Belgium, Poland, Israel, and the Netherlands, serving as his interpreter at aikido and Zen seminars. Her BA dissertation for Japanese Studies ‘Karate as a Human Survival Strategy - An Evolutionary Perspective on Karate’ was published in Uchinadi Journal in 2004, 4th quarter. Since 2010 she has published several aikido related articles in Aikido Journal. Anna Sanner has worked as a script writer, director, language teacher, interpreter, and show ninja. She is currently working as a freelance writer, translator, interpreter, and dance instructor based in Hawaii, Japan, and Germany. Anna Sanner has published blogs about her experience in Japan, including martial arts training, social observations, and working as an apprentice ninja in Iga, under http://aksanner.blogspot.com and http://kunoichihe.blogspot.com. Her current blog spanning life in Japan and Hawaii, as well as aikido trips to Europe can be found at http://mahaloworld.blogspot.com.