There's Nothing Louder Than Dead Air

Stories from thirty years behind the mic

by Bob “the Blade” Robinson 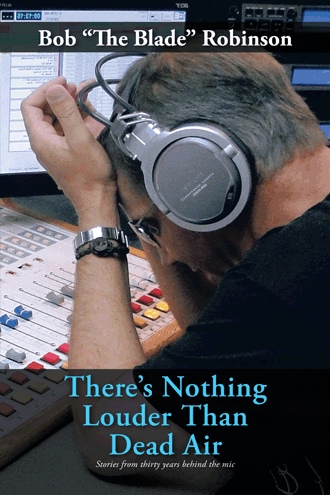 I was thirteen and spending the night with Mac Hartman who was the same age, and while we were playing “Sorry”, which was our fun that Friday night—his older sister, Kathy, walked around the corner and stood in the doorway, wearing her white bathrobe. I looked up from the board for a second; Mac turned over his two-card and moved his red pawn. He could care less that his big sister was standing in the doorway, wearing just her bathrobe. I cared. She was sixteen. “Dad wants you to walk the dog, Mac,” she wasn't looking at Mac. She was looking at me. Kathy Hartman was standing there in just her bathrobe as Mac walked past her and out through the doorway to walk the dog. I looked at her bare legs and feet, and when I looked up, she was motioning with her finger for me to follow her. Dumbfounded, I got up as quickly as I could and followed her down the hall and into her bedroom. She pulled “Déjà Vu” out of its sleeve, put it on her turntable, and started it. “This is Crosby Stills Nash and Young, I really like it. Do you?” I said I did like it, because I really did. Kathy Hartman was the first to turn me on. To Crosby, Stills, Nash & Young.

You'll love how Bob "the Blade" Robinson stuck it to the man. You'll learn how schizophrenia isn't all that bad. What is the GREATEST guitar solo in rock? Who is the real King of Rock N Roll? How can you live on 8k a year? You can't. But you can feed your head for that much. The new tell-all from a rock radio vet of 30 years. The first real read about the sheer lunacy of the rock business. There was no other business is like it.

Bob "The Blade" Robinson was a rock radio DJ through the "Sex and Drugs and Rock N Roll" rock heyday of the '70's and up until 2011 when his last rock station eliminated all it's DJ's and became a jukebox format. He lived it, but almost didn't live to tell about it. They called him "Blade". The oldest son of a United States Air Force lifer, he lived all across the world including war torn and guerrilla infested Central America, beautiful but now destroyed northern Japan, and many of the fifty United States. He currently lives in Raleigh North Carolina and with the exception of being seen on a golf course from time to time, his activities remain unknown.