Evaluation of Ocean-Energy Conversion Based on Linear Generator Concepts

by Michael A. Stelzer, Ph.D. 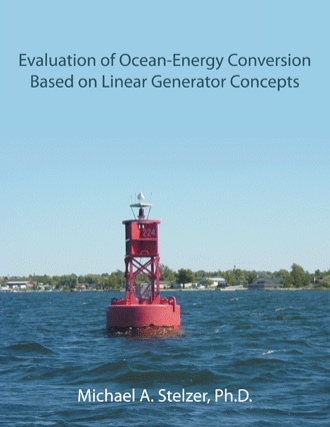 ABSTRACT EVALUATION OF OCEAN-ENERGY CONVERSION BASED ON LINEAR GENERATOR CONCEPTS A turbine generator is a device that converts mechanical rotation into electrical energy. Unfortunately, the primary driving force that has been used to provide this rotation has, thus far, been fossil fuels. Although fossil fuels have proven to be a reliable resource to continually supply the growing demand for electrical power, they are not without their financial and environmental drawbacks. With the continuously increasing demand for energy it is hypothesized that the world may in time, exhaust this precious natural resource and/or inflict permanent environmental damage upon our planet. However, motions that occur in nature, such as ocean waves, can play a significant role in generating environmentally safe and economically viable energy for human utilization. As part of this research project, a linear electrical generator (which uses a “back-and-forth” motion of a piston rather than a rotational movement) will be modeled to probe the production of electrical energy simply from ocean waves. This would also be a less complex design compared to that of conventional rotational versions. Quantitative analysis for the voltage and power produced from the linear generator for a given set of ocean-wave characteristics will also be carried out, probed and discussed. Previous research into this topic have primarliy relied upon modeling an ideal buoy (i.e. one that matches the waves’ height and motion at each instant in time) responding to the surface ocean waves under the regular wave regime. This work, however, more closely analyzes the physical properties of the buoy and predicts the electrical power generation capabilities from a seabed mounted linear generator Wave Energy Convertor (WEC) tethered to the floating buoy operating under the influence of a non-ideal buoy and the more realistic irregular wave regime. Several buoy sizes will be modeled to exploit the buoys’ natural heave frequency in an attempt to create a greater heave response for a given set of sea state conditions. It will be shown that a greater heave response from the buoy generally leads to an increase in the generated power from the linear generator. 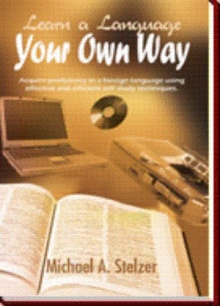 Learn a Language Your Own Way
Michael A. Stelzer
$13.45

EVALUATION OF OCEAN-ENERGY CONVERSION BASED ON LINEAR GENERATOR CONCEPTS As the world continues to demand greater productivity and lifestyle enrichment through technological advancements, the demand for electrical power is predicted to escalate dramatically. Thus far, this increased demand has been primarily supplied from fossil fueled plants. Unfortunately, the burning of fossil fuels produce harmful carbon dioxide pollution as a by-product. It has been hypothesized that unless a clean, renewable, and efficient alternate source of energy is found soon, the world may either exhaust its supplies of energy-producing materials or drastically degrade its environment. However, motions that occur naturally, such as ocean waves, can play a significant role in generating environmentally safe and economically viable energy for human utilization. The focus of this work predicts the electrical power generation capabilities from a seabed mounted linear generator tethered to a floating buoy heaving under the influence of passing ocean surface waves. Mathematical models are introduced which simulate the oceans’ surface conditions under both the regular (basic) and irregular (natural) wave regimes, the heave (vertical displacement) response for a floating buoy, and the resulting electrical output parameters of the linear generator. Within these models, various physical and electrical parameters are altered in an attempt to generate a greater output power for a given sea state condition, making the Wave Energy Converter (WEC) more efficient. It is shown theoretically that the buoy can be designed to have a greater heave response than that of the height of a passing wave resulting in an increase in generated power from the linear generator. Author Information: Dr. Michael A. Stelzer is a Certified Project Manager and Senior Electronic Technician with a Ph.D. in Electrical and Computer Engineering. During his career to date, Mr. Stelzer has published four additional educational titles and has been admitted into Cambridge Who's Who top 101 industry experts.

Dr. Michael A. Stelzer is a Certified Project Manager and Senior Electronic Technician with a Ph.D. in Electrical and Computer Engineering. He is the first student to have obtained his Doctoral degree in Electrical Engineering from Old Dominion University, in the field of Marine Related Energy Generation. His latest research focused on a simulation study to evaluate the potential for extracting electrical energy from ocean waves as a green and renewable alternative to the energy problem. This reasearch focused primarily on techniques for optimizing the linear generator that takes account of the coupled wave-buoy interaction for producing greater output power for a given set of wave parameters. Between 1991 to 2001, Mike enlisted in the U.S. Navy and graduated from Naval Nuclear Power school, where he studied nuclear physics and reactor theory and operation in order to supply the necessary power to Naval vessels. Later, he went on to work on aviation electronics, where he worked on several radar, communication, and navigation systems in support of the fleet. During this time, he obtained his MS degree in Electrical Engineering from Old Dominion University in 2001. During his career to date, Dr. Stelzer has published four additional educational titles and has been admitted into Cambridge Who's Who top 101 industry experts.