Not Your Grandpa's War Story 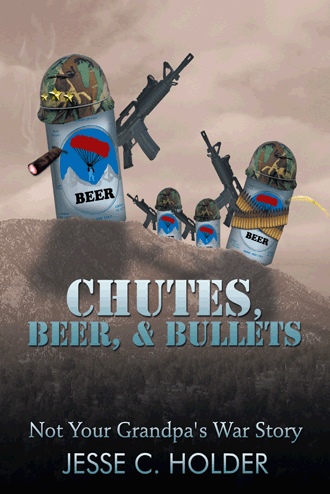 Chutes, Beer, & Bullets: Not Your Grandpa's War Story is a humor filled narrative that takes place during the peak of The War on Terror. Follow Jesse is this uncut and unscripted adventure as he leads you through United States Army Airborne School, Europe, and ultimately to Operation Enduring Freedom in Afghanistan. Chutes, Beer, & Bullets is assured to have you laughing, sighing, looking away, and possibly even shedding a tear as you connect with the real life characters within. No doubt you will be longing for more as you turn the final page.

Jesse Holder graduated United States Infantry and Airborne School in the spring of 2006. He served in the 173rd Airborne Combat Team from June, 2006 to July, 2009. He has completed two combat tours, the first being a fifteen month deployment in Afghanistan with the 173rd ABCT; the second being with the 3rd Infantry Division in Iraq. Jesse hails from Valdosta, Georgia and is very passionate about friends, family, food, beverages, traveling, and University of Georgia football.