TALES FROM A CAROLINA CRAZY

Reaching The End Of My Rope 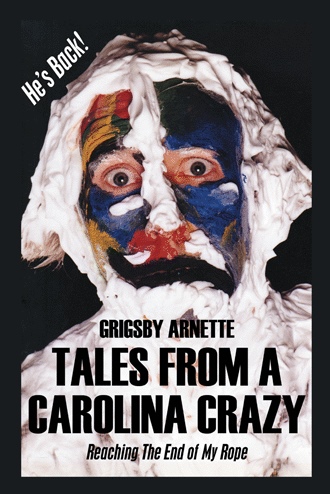 TASER STUPID It was anniversary time and God help you if you forget this occasion! Dennis Mason saw something in Flood’s Pistol & Pawn Shop that sparked his interest. The occasion was he and his wife’s 20th anniversary. He was looking for a little something extra for his wife Judy. What he came across was a 100,000-volt, pocket/purse sized taser. The effects of the taser were supposed to be short lived with no long-term adverse affect on your assailant, allowing her adequate time to retreat to safety. Way too cool! Long story short, Dennis bought the device and brought it home. He loaded two triple-A batteries in the damn thing and pushed the button. Nothing! He was disappointed. He learned however, that if he pushed the button and pressed it against a metal surface at the same time; he’d get this blue arc of electricity darting back and forth between the prongs. Awesome! Unfortunately, he has yet to explain to Judy what the burn spot was on the face of the stove. Dennis was home alone with this new toy, thinking to himself that it couldn’t be all that bad with only two triple-A batteries, right? There he sat in his recliner, his cat Fluffy looking on intently, trusting little soul, while he was reading the directions and thinking that he really needed to try this thing out on a flesh and blood moving target. Dennis admitted he thought about zapping Fluffy for just a fraction of a second, but decided against it. She’s such a sweet cat. But, if he was going to give this thing to his wife to protect herself against a mugger, he wanted some assurance that it would work as advertised. Was he wrong? So, there he sat in a pair of shorts and a tee-shirt with his reading glasses perched delicately on the bridge of his nose, directions in one hand and the taser in the other. The directions said that a one-second burst would shock and disorient your assailant; a two second burst was supposed to cause muscle spasms and a major loss of bodily control, a three second burst would purportedly make your assailant flop on the ground like a fish out of water. Any longer than three seconds would be wasting the batteries. All the while he’s looking at this little device measuring about 5” long, less that ¾ of an inch in circumference; pretty cute really and loaded with two itsy bitsy triple-A batteries thinking to himself, ‘no possible way!’ What happened next is almost beyond description. Dennis was sitting there alone, Fluffy looking on with her head cocked to one side as to say, ‘don’t do it dip-shit,’ reasoning that a one second burst from such a tiny little ole thing couldn’t possibly hurt all that bad. He decided to give himself a one second burst just for the hell of it. He touched the prongs to his naked thigh, pushed the button and…HOLY MOTHER OF …!@*!... WEAPONS OF MASS DESTRUCTION… WHAT THE HELL!!” Dennis is pretty sure Jessie Ventura ran in through the side door, picked him up in the recliner, and then body slammed them both on the carpet over and over again. He vaguely recalls waking up on his side in the fetal position, with tears in his eyes, body soaking wet, both nipples on fire, balls no where to be found, with his left arm tucked under his body in the oddest position, and tingling in his legs? The cat was making meow sounds he never heard before while clinging to the picture frame hanging above the fireplace, obviously in an attempt to avoid getting slammed by his body flopping all over the living room. Note: If you ever feel compelled to ‘mug’ yourself with a taser, one note of caution: There is no such thing as a one second burst when you zap yourself! You won’t let go of the damn thing until it is dislodged from your hand by a violent thrashing about on the floor. A three second burst would be considered…conservative? SON-OF-A-BITCH MOTHER…….THAT HURT!!! A minute or so later, Dennis can’t be sure, as time was a relative thing at that point. He collected his wits, what little he had left, sat up and surveyed the landscape. His bent reading glasses were on the mantle of the fireplace. The recliner was upside down and about 8 feet from where it originally was located. His triceps, right thigh and both nipples were still twitching. His face felt like it had been shot up with Novocain and his bottom lip weighed 89 pounds. He had no control over the drooling. Apparently, he crapped on himself, but was too numb to know for sure and his sense of smell was completely gone. He saw a faint smoke cloud above his head, which he believes came from his hair. He’s still looking for his balls and offering a significant reward for their safe return! Dennis’s wife Judy loved the gift, and regularly threatens him with it!

In his second book Grigsby has amassed a delightful collection of humorous short stories that takes us back through our youthful days of innocent pranks and rollicking fun with friends and acquaintances.

TALES FROM A CAROLINA CRAZY covers experiences from childhood through college days and into adulthood.  The adventure, humor, thrill of the chase and much more takes us across the United States, Canada as well as through the Middle and Far East.

This collection of stories written from a Southerner's point of view will amuse, entertain and enlighten you.  If you would like to find out what it was like to grow up in the South, travel across country and read about foreign adventures, then you'll certainly devour TALES FROM A CAROLINA CRAZY.

Grigsby Arnette was born and raised in South Carolina where he spent his youth exploring the Atlantic ocean, the waterways and national forests of the area, always seeking adventure.

As a tennis professional he has traveled around the world fifteen times experiencing quite a few changes in customs and cultures.  He has also lived in many areas across the United States.  He is recognized by the USTA and the USPTA as a well respected coach on the international level.  He has also coached many foreign Davis Cup teams.

In addition to his tennis, he is a professional percussionist, fisherman, hunter, mountain climber, scuba diver and dirt biker.  He also is the inventor and owner of www.BiminiRingGame.com.  He has a quick wit, love for life and an unquenchable thirst for adventure.