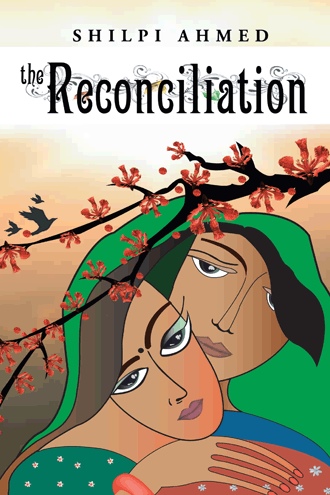 With the change in her perspective came a change in everything else. She cut her hair short, shoulder-length layers, dead straight and jet black. She stopped using khol around her eyes and used mascara instead. She seemed to go back to a more sociable existence, cooking different dishes and entertaining friends that she hadn’t seen for a while. She began redecorating the living room, painting it in bright colors of yellow and orange and replacing the large cushions with a modern divan and a leather couch. She was exploring the realm of modern art, abstract expressions, and imagery. Seeing her engrossed again, back to shredding canvases and her eccentric tantrums that I supposed were a part of her artistic spirit, I was a little more relaxed again. I resumed with life the way things were. We communicated on most things, my work and her paintings. We planned that in April, after her next exhibition, we would take a long holiday. I didn’t want to mention the cat, who seemed to be more of a friend to her than me. She spoke to it in a cooing voice as if the creature could understand what she was saying. Once she had walked in with bags of shopping, and Snowballs had rushed to her side, meowing. She completely ignored me sitting on the couch and went about having an entire conversation with the darned cat. “Look, Snowballs … look what I got for the couch!” she told the cat, who meowed his reaction. “Yes … cushions! See … Aren’t they beautiful? These are not your cushions, so paws off. No scratching … okay?” I had been avoiding Snowballs since that day he made me spill my tea on my script. But many other incidents occurred with the cat, and so she was always protective of him, keeping the cat out of my way and even locking him in her room when my friends came over. Once he had come under the dining table and brushed up against my legs, curling its tail around my calf. It had been so unexpected that I involuntary kicked him, and the cat went howling and wailing like a baby. Sabrina was immensely repulsed by my actions, saying that I was a “heartless brute.” “How can you be so cruel? Why would you be jealous of Snowballs?” “Well … you seem to pick his side over me these days.” “Don’t be ridiculous, Joyto! How can you say that, after I’ve sacrificed my entire family for you! I left everyone and everything to marry you and now …” “I sacrificed my family too, you know!” I blurted. I hated it whenever she mentioned her sacrifice. The word sacrifice always meant something different to me. It meant she was giving up a better and easier life for my sake. It made me feel small and worthless. “I didn’t ask you to leave them!” She spat out. “Well, you didn’t stop me either.” I had said this quietly, not really intending her to hear me. The stunned look on her face made it apparent that she had; it turned into a pained look of disgust before she shut herself in her studio. Our fights always ended in her sudden silence, and I used to think that I had won. But now I can see how much my words must have hurt her. It’s true that my relationship with my family had become estranged, but that was not her fault. I had left their house and was free to visit, but my family was always so full of accusations that I preferred to avoid them. I resented the fact that she was reunited with her family, when they had sworn to destroy me if I ever saw her again. It irked me that she could so easily blend into their world, when I would always stick out like a sore thumb, never quite belonging to their elite class, never quite understanding their referrals to certain people or places, never really getting their inside jokes, and never fully understanding their codes of etiquette. I resented that she brought home little gifts from them; the bohemian crystal vase from Denmark; the silver-plated, jewel-studded Sheesha from Iran; the ornamental Faberge egg collection from Russia, and the massive mother of pearl inlayed bowl from China that lay resplendent on our coffee table. Then there was the expensive diamond-studded watch, a state-of-the-art Nikon camera, and a forty-two-inch plasma TV that replaced the cheap Chinese twenty-eight-inch box I had purchased. And of course, there were the saris that came from Delhi and Bombay every time her mother went for a shopping spree, each worth half my income. I never expressed this to her, of course, but these scattered items that took up residence with us bothered me. They sat around the duplex, contemptuous, taunting, silently jeering at me, reminding me of my lesser status.

A woman, desperate to escape an abusive and fanatic husband, returns to the country where she grew up, only to discover that her soul has always been trapped in her turbulent past. Burdened with internal wounds of regret and two small daughters, she attempts to fight her inner demons to conquer all that has repressed her for so many years. ***** A man tormented by his feelings of inadequacy due his lower social status, and his role in the betrayal of the woman he loves, that leads to a murder gone unnoticed, struggles for absolution and atonement. ***** A woman battles her family and belligerent social pressures, in order to build a career and an identity of her own, only to find that marriage was her ultimate fate. Spurned by an unrequited love, she pledges to remain a spinster, until she is blackmailed to make what she see’s as the ultimate sacrifice. ***** A son is ostracized by his father for marrying a Non-Muslim, and what his family interpreted as a betrayal of ones duty to a newly born nation, becomes estranged from his Bangladeshi family. Divided for three decades by their differences in principle and the gap in communication as well as thousands of miles between them, he returns to his homeland to face them on his fathers deathbed, and as he desperately tries to reconcile the past with the present, time betrays him, only to discover an amazing revelation that fills him with insufferable guilt. ***** A Muslim boy, growing up in London becomes culturally confused and is torn between the demands of his eastern family and a western lifestyle. In his search for a girl he once loved, he battles his need for an identity and learns to find peace, but at a great cost. ***** A forbidden love, beleaguered by religious stigma, destroyed by the demands of duty to ones family, survives to be nurtured in the heart of a young girl who finds it impossible to resolve her feelings. Tormented by her need to be loved back, she goes through a life that’s chosen for her by fate, beset with the ghouls of her past, hoping against all odds for a reconciliation. Each story is a first person account of how they come to reconcile their hearts with their circumstances.

Shilpi Ahmed grew up in London, U.K where she spent half her life. The other half she spent in Bangladesh, far from everything close and familiar. She graduated in Sociology and then went on to do another degree in Business Management, followed by a career in leading businesses in the service sector. This sudden move has given her a range of experiences and a sensibility that has motivated her to write. Her interests are art, history and film.