Law of Love & The Mathematics of Spirituality 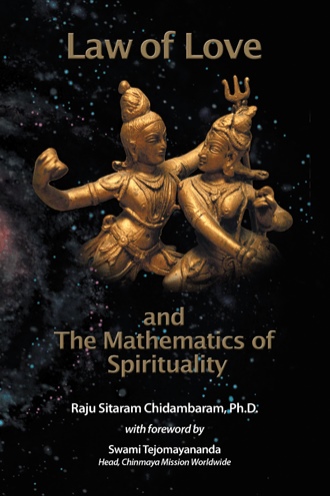 You will find in this book a rather unfamiliar mix of spirituality, Vedānta and mathematics. As such the reader’s first reaction may be to question what Vedānta has to do with Mathematics or how mathematical analysis can help a discussion on spirituality. While the long answer to this question is in the pages of this book itself, I would like to address these questions now as a way of introducing the subject matter of the book.

Deep within all human beings there is a longing for truth, love, beauty and peace. This dimension of our existence is separate from the physical comforts we seek from the world and is a manifestation of our spiritual nature. The spiritual needs of human beings are as real as their physical needs. Being real, it should be possible to investigate this spirituality with the same objectivity found in the sciences dealing with the physical world. Scientific methods, including mathematical analysis, that have so well succeeded in furthering our understanding of the universe of matter and energy should also help in studying spirituality. This is the rationale for my views; the inspiration for this view has come to me from two great thinkers and teachers of our time, Dr. S. Radhakrishnan and Swami Chinmayananda.

In the summer of 1961, I and my fellow graduate students in the Indian Statistical Institute, Calcutta, were sent to New Delhi to learn about the ways the various departments of the Government in India collected and utilized statistics in their work. A small group among us took the opportunity of our month long presence in the capital city to seek audience with the then Prime Minister Jawaharlal Nehru and separately with Vice-President Dr. Radhakrishnan. Our requests were promptly granted, partly based no doubt on the reputation our institution and its director Prof. Mahalanobis had with Mr. Nehru and others. While our encounter with the Prime Minister was polite but brief, the one with the Vice-President at his official residence was more engaging. Seated cross-legged in an overstuffed chair and without his customary turban, the eminent philosopher appeared quite relaxed and willing to talk. He opened his remarks tauntingly with the cliché “Ah, Statistics and lies!” meant clearly as a bait, but then quickly moved to soften the blow by adding another well worn phrase “Figures do not lie, but liars do figure.” To our relief, however, the discussion turned away soon from statistics and more towards philosophy.

What I recall most about that evening was his response to a question I asked him: What did he have to say about the historic stand-off between Science and Religion? I expected a long answer to a difficult question, but what I got instead was a stern put-down followed by a memorable one-liner.

“Don’t tell me tall stories!” said Dr. Radhakrishnan, as though my question was presumptuous. Then, after a brief pause, he added:

“A little bit of science takes you away from religion—but a little bit more of it will bring you right back to it!”

I do not remember much else the Vice President said in answer to my question, but probably that is because everything else that followed was somewhat redundant. The sharp insight behind his short answer was indeed impressive. Guruji Swami Tejomayananda, the current Head of the global Chinmaya Mission, who we had the honor of hosting once at our home, thought well enough of Dr. Radhakrishnan’s statement to quote it in his fascinating book Hindu Culture [1].

Dr. Radhakrishnan was a scholar renowned for his understanding of world religions, but his ideas were particularly well rooted in the Gītā and Upaniṣads. To me his answer revealed his conviction that modern science and the Vedānta taught in the Gīta and Upaniṣads are not in conflict and that in fact they have edged closer to each other in recent times. In making his statement, Dr. Radhakrishnan was very likely referring to the revolutionary ideas in the 20th century science, especially in Physics.

One of the most effective teachers and practitioners of Vedānta in the 20th century was Swami Chinmayananda, the founder of the world-wide Chinmaya Mission. The author is fortunate to have had the opportunity to listen to his talks on Vedānta and also to be closely associated with the Mission for over two decades. Gurudev, as he is known to many in the Mission, usually referred to Vedānta as the “subjective science” where the object of scientific enquiry is one’s own self or “the seer”. He emphasized that in its rigor of reasoning and analysis, Vedānta was no less scientific than the “material sciences” where the object of enquiry is the outside world or “the seen”. Vedānta’s theoretical constructs are logically sound and its practical inferences verifiable by experience. Swami Chinmayananda brought this out clearly by what he taught as well as by the way he lived among us.

In the Bhagavad Gita, Lord has thus ordained : ye yathā mām prapadyante tānstathaiva bhajāmyaha ṁ | mama vartmānuvartante manuṣyā ḥ pārtha sarvaśa ḥ || Tr: “The way they approach me, I too approach them in the same (reciprocating) manner. O Partha, all human beings follow paths leading to me.” To the seers of the Rigveda, the Brahma revealed Itself in the form of Rcs; to the saints as all powerful deities manifesting in different forms; to the philosophers as dual existence dealt in the sānkhya philosophy; while to a mathematician It is manifested in the form of mathematical equations. Dr. Chidambaram’s work ushers readers into the mathematical landscape of spirituality. It is simple enough to understand with some basic knowledge of mathematics. It will pave way for coming generations of mathematicians to chart novel ways to understand the Ultimate reality, the Supreme Brahman, through mathematics as laid down here. Dr. Pramod Pathak, Author and Indologist, Panaji,Goa

Trained formally in mathematical sciences in his student days, the author found a lasting interest in Vedānta later through his association with the Chinmaya Mission. He was born in the Trichur District of Kerala, India in 1940, and received early education in local schools. He received a B.A.(Hons.) in Mathematics from the University of Madras in 1960, Master’s Degree in Statistics from the Indian Statistical Institute, Calcutta in 1962 and doctorate in Operations Research from the Case Western Reserve University in Cleveland, Ohio in 1967.

Dr. Chidambaram’s working career spanning more than three decades was mostly spent in Washington, DC in the field of global satellite communications, but he also was at various times engaged in teaching and consulting in the US and India. One of the valuable skills he learnt during this long career was to solve all kinds of problems- engineering, management and financial- by using appropriate mathematical tools.

It is the same skill set that the author found useful in understanding spirituality. In 1978 he had the first opportunity to listen to Swami Chinmayananda at the American University in Washington, DC. The power and logic of Vedānta, as taught by Swamiji, impressed him significantly. Since then both the author and his wife have been students of Vedānta as well as active members of CMWRC, the Chinmaya Mission branch in Washington, DC. The author served as the President of CMWRC during 1991-93 and currently serves in its Board of Trustees. As the Editor of Smrithi, a newsletter dedicated to Vedānta, he also published a series of articles on Vedānta during 1987-97 which helped formulate many concepts and thoughts that now find a place in the current work.

After taking early retirement from his career, the author could devote more time to answer a question he was long intrigued with: Are the basic teachings of Vedānta logical and precise enough to be stated mathematically? The first result of that enquiry was a paper published in Dec 2000 titled “The Vedānta of Decision Making” in Chinmaya Management Review. Between 2000 and 2007 the research work led progressively to the development of a mathematical theory of spirituality. The results were presented in a series of papers in various WAVES (World Association for Vedic Studies) conferences during 2004-2008, as well as in the 2009 International Vedānta Conference held at Dartmouth, MA.

Currently the author lives in Alexandria, VA with his wife, Shobha, a practicing Neurologist. Of their two daughters, Sharada is pursuing a career in law while Vrinda is in her Ph.D. program in Theoretical Linguistics at the Princeton University. The author’s goal in coming years is to actively promote research and education in spiritual science through conferences and publications.