by Lloyd A. Baron 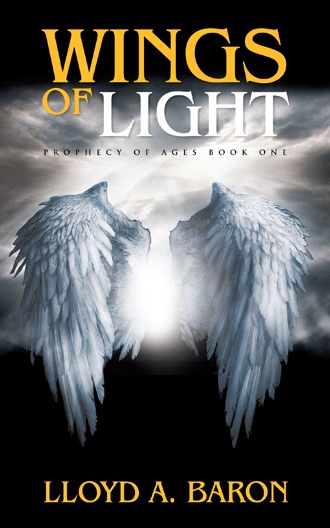 Darwin't Utsa is a weaver, living in the hills with his Aunt and about to be bonded to his childhood love. His life is set before him and he is bored with it. He has dreamed of adventure and of travel across the world of Atlantia but knows now that can never happen. That is until his best friend takes him into the caves under the old well. Darkness swarms the world and Darwin't finds that he is the focal point of an ancient and forbidding prophecy. Charged with the job of saving the Last Princess of Atlantia he must leave his quiet life behind and plunge into a waking nightmare of ghouls, dark wizards and dragons. He will not be alone, for the prophecy tells of heroes who will follow him into the final days of the world. But the prophecy is not complete. The end has not been written. A dark watcher has his eyes turned upon the world of Atlantia. And a small child who dreams of having Wings of Light may be the key to the very end of existence of everything Darwin't holds dear. All he wants now is a simple life in the hills with the woman he loves.

Lloyd Andrew Baron is a student of English Literature and Art History, as well as Philosophy and Sociology, who also has a comprehensive writing course under his belt. Lloyd is well versed in classic literature techniques as well as modern fluid story telling and has been developing his craft for almost a decade. With a keen interest in story telling and character development he has studied many writing styles as well as religious and spiritual beliefs to understand human reactions and responses within many situations, which he now uses to make his writing come to life. Developing a quick and easy to follow style, he believes that his story telling will speak for itself and captivate his readers. Drawing upon personal experiences to bring his characters to life. Lloyd believes that reading should stir the whole pot of emotions and seeks to make his writing fun, sad, shocking and unpredictable. Growing up as the middle child in a noisy house Lloyd would take himself off to create stories and fantasy worlds. As he grew older he turned these very ideas into the beginnings of a grand story in which he is now undertaking. Living in Portsmouth, England he works in the entertainment business while writing in every spare moment he can find. A keen Video gamer and reader keeps his mind fresh and four trips to the gym a week keeps his body active.