Pass Me The Rice 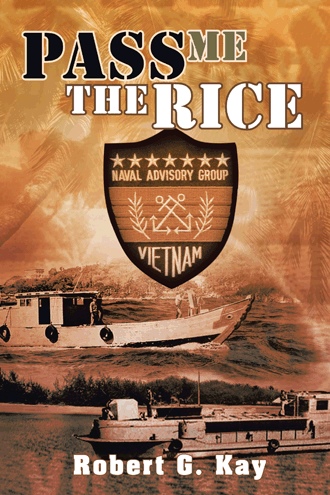 It was then that he remembered the long slim knife at his side. Slowly unsheathing it, he held it out in front of him as he started to inch forward. Hugging the ground as much as possible, he extended the knife until it pressed up against the quivering throat muscles of the fallen man. At its touch, the trooper’s eyes widened with fear realizing that his pain was yet to be over. With a quick thrust, the slim blade entered piercing the man’s carotid artery causing bright red blood to spurt forth instantly wetting Khoi’s hand as he pulled the blade from the soldier’s neck. Within a few seconds the trooper died with his hands curled as if in supplication to a God who obviously had not watched over him.

Tag along with LT Bob Kay as he goes from the Atlantic Fleet to the other side of the world where he becomes involved in many unexpected events that come at him from every angle in an ancient war-torn country whose people are fighting for their very survival. Accompany him aboard a Junk patrolling from the Gulf of Thailand to the South China Sea and aboard a River Assault Craft delving through the narrow waterways of the Viet Cong infested Delta. He provides some history which helps to define and give you a better insight into the makeup of the Vietnamese people and their  fighting forces. It also portrays the complex problems that arise between counterparts both in combat as well as in social settings.

1. All of the events depicted in "Pass Me The Rice" are authentic because of my direct participation in them and also having pertinent facts provided to me personally. As a Naval Officer, I spent two years as an Advisor to the Vietnamese Navy's Junk Force patrolling the waters from the Gulf of Thailand to the South China Sea and the River Assault Groups on the rivers of South Vietnam. 2. In between those two assignments, I was on the Senior Naval Advisor's Staff in Saigon for several months where I created and edited "The Advisors Newsletter," a monthly effort for the men in the field. The 3rd edition earned me the Chief of Naval Information's Best Navy/Marine Newsletter award for the Third Quarter-'68. 3. I graduated from the University of Minnesota and currently reside in Pensacola, Florida with my Vietnamese wife Kim. I retired from the Navy in November '69 due to wounds received in Vietnam and also retired from Civil Service in October 1997 where I was a Supervisory Repair Engineer for Cruisers and Battleships.