LISTEN WITH YOUR EYES

the poet tree of Strainj 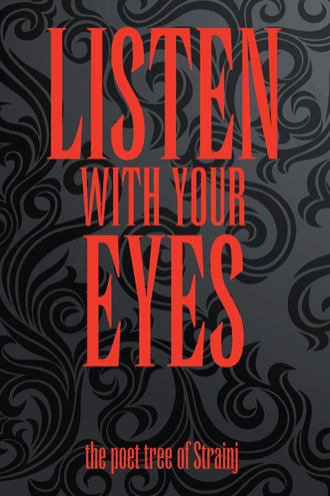 “LISTEN WITH YOUR EYES” is the most conscientious yet simplistic reflection of society's cascade written in poetic rhyme that an author can ever give a reader. The script in this book is written with bold honestly often in contemporary street lingo relevant to the writer's environmental influences that help seed these pieces. With subject matter ranging from substance abuse, child abandonment and rape to self esteem, materialism and racism, this book is a refreshing and much needed read in these dismal times of witch we live in. Strainj is constantly told by admirers that he “writes poetry for people that don't even like poetry”witch is probably why the common unartsy are attracted to Strainj's poetry so much. There is a very strong inspirational feel about these poems, relating to many walks of life, they're street corner at the same time office building, church pew at the same time park bench, tears at the same time smiles... all in harmony and promoting mental and spiritual ascension. All strainj asks is that you read this book with an open heart and mind, in other words... LISTEN WITH YOUR EYES.

The question was posed, “what qualifies you to write this book of poetry?”my reply was, just like the notable greats Rabindranath Tagore, Rumi, Mark Twain, Langston Hughes and William Shakespeare often called the greatest writer and poet in the English language, I have no academic degrees or professional certifications in writing free verse, poetics or formal poetry. The world is my classroom and the life experiences of my self and others are my teachers earning me degrees in wisdom and understanding, making the heartfelt, thought provoking, sincerity of my poetry self certifying. My name Strainj (pronounced strange) meaning unusual or unfamiliarity is only fitting due to my emotionally moving, conscious/street style of writing and delivery. For the last few years I've been reciting my poems throughout Compton, Watts and my own hometown of Los Angeles receiving undeniable acceptance, that's why I'm so animated about releasing my first book of poetry and sharing words of light to all looking for change or as my slogan goes”from the mansions of the mind to the projects of the heart, let the principals of this script and your understanding of it never part”-Strainj poet/spoken word artist.