The Pastor has Gorgeous Legs 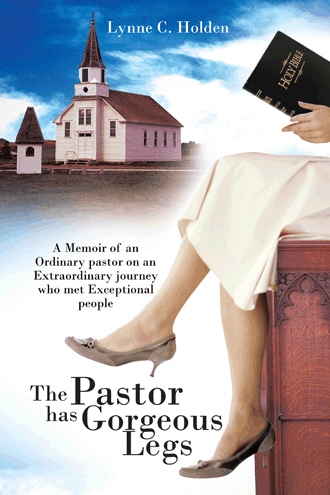 Introduction These essays are what I see in the “mirror of my mind”. These are personal memories which may differ in details if another who may have shared in these stories told the story over. That is to be expected. I have not changed names or places. If a name has been changed I will tell you, Dear Reader. There is nothing ordinary about being asked to share in people’s lives, especially in the life changing events of marriage, birth, baptism, and the other countless celebrations of life, including celebrating the lives of those who have died. Each and every time that I have been involved in the sharing of these occasions has been extraordinary. I am sure that every pastor of every religious denomination would and could say the same. There have been some unique experiences I would like to share as well as things that I have learned as a woman pastor which, in my humble opinion, have been extraordinary. I’ve always said, “Someday I’ll write a book about the things people have said to me or situations I have found myself in while in the pastorate.” This is that book! The title is taken from a comment a man made to my colleague, the Reverend Newell Bishop, during my first year of ordained ministry. I had been called to serve as the student pastor of the First Baptist Church of North Stonington, CT commonly known as the Pendleton Hill Baptist Church. Following my graduation from Seminary and the retirement of the incumbent pastor, Reverend Richard (Dick) Mitchell, the church called me. I remember there was one negative vote for my call. It came from Farmer Hill. He said, “I’ve never had a woman in my pulpit and I don’t intend to have one now!” Everyone loved Farmer Hill and I was distraught. Already I had lost a member! I cried on Dick’s shoulder and he said, “Don’t worry.” Dick went on to tell me about how he had lost a member when he refused to shave off his beard and a parishioner told him he wasn’t going to sit in the pews staring at a bearded man. Then Dick continued, “So, Lynne, we are even: I lost a member because I had a beard, you lost a member because you can’t grow one.” That was in 1983. I know I am much older now and I can tell this because my eyebrows are growing out of my chin and they are WHITE. The first funeral I officiated at was for a former Connecticut State Senator. I got to know “Charlie” over the year during which I was the student pastor. His home was just down the road from the church, and I enjoyed our visits. I can still recall the smell of his bread and butter pickles that he was famous for making. His funeral was an enormous affair. Most of North Stonington came, along with various state officials and dignitaries. The little church was bulging at the seams. The horseshoe balcony was full and there were people in the foyer flowing through the front door and out onto the grounds. After the burial we gathered in the church basement for refreshments. Newell Bishop came up to me and said, “See that fellow over there. He told me you have gorgeous legs.” I looked at Newell somewhat bewildered because I had never had any sort of compliment like that from anyone, so I just said, “Well, you go tell him he is welcome to come to church any Sunday and look at them.” Fast forward to May 2, 2005. I was sitting with my Dad outside the nursing office at the Overlook Nursing Home in Pascoag, Rhode Island. We were there for his family conference. As we were waiting in the hall for our turn to meet with the staff and administrator, Dad said to me, “You look nice in your skirt.” “Thank you,” I said. Then he said, “You should pull your skirt up ever so slightly and allow your legs to show more…you know, you have gorgeous legs.” At 89 the man was still looking! Dad died three days later. What a lovely memory of our last true conversation. Then, on Mother’s Day 2005 my oldest grandson, Robert, who was 5 at the time, made me a card. His mother wrote as he dictated. My card read: “Happy Mother’s Day. I love you. I like your legs”. So the verdict is in! From a stranger, a father and a grandson-the pastor has gorgeous legs

The author reflects on her thirty years as a pastor in various settings, both as a settled pastor and as Interim Pastor. She writes of her early life and her sense of Call at the age of thirteen yet unable to answer that Call for almost 30 years. The struggles of being a woman in a male dominated ecclesiastical world and other challenges which the author has overcome makes for fun but serious reflections.

Lynne C. Holden has served churches in Connecticut, Rhode Island and Massachusetts, both for the American Baptists Churches USA and The United Church of Christ. She graduated from Yale Divinty School where she earned the M.Div.degree and in 1998 received the D.Min degree from the Pittsburgh Theological School. She is presently retired from active ministry but is a welcomed guest preacher in churches throughout New england. She holds the honory title of Pastor Emerita from the Second Congregational Church-United Church of Christ-Attleboro, Massachusetts. In her book, Dr. Holden reflects on her thirty years of active ministry, the joys and the sorrows, the ups and the downs of parish life. Through out all the life cycles of parish life she continues to have a deep passion for Christ, His Church and His mission. She lives in Harmony, RI with her companion of twenty years, close to her son and daughter and their families. She never tires of spending time with her four young grandsons and delights in their summer activites on the lake during "Meema Camp."