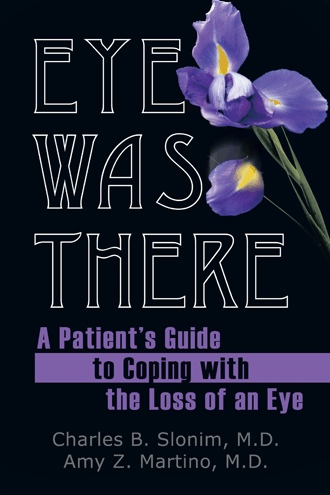 Eye Was There is created specifically for any person who is considering having an eye surgically removed or is coping with the loss of an eye. It is also created for that person’s caretakers, family members and friends. There are limited sources of information, outside of a doctor’s office, from which a patient can learn about what to expect before, during, and after the surgery to remove an eye. The doctor or the doctor’s staff might not have the time to handle the variety of questions that are commonly asked. Many of the questions arise after the patient has left the doctor’s office. Eye Was There is intended to serve as a source of information regarding the preoperative, surgical and postoperative options surrounding the loss of an eye. It explains the most common surgical procedures performed to remove an eye and the potential complications that can occur after surgery. It details some of the medical conditions leading up to the removal of an eye. It describes the emotional and psychological steps that are experienced when dealing with the loss of an eye. It contains historic and current information on the manufacturing and fabrication of artificial eyes and orbital prostheses. It provides instruction and advice regarding the care and handling of the artificial eyes and orbital prostheses that are worn after surgery. The book is meant to give a positive perspective of dealing with life after the loss of an eye.