The Complete Guide for Baseball Catchers 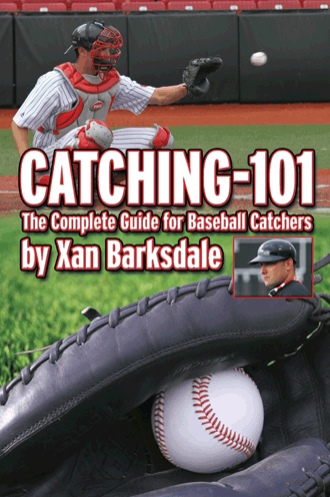 CATCHING-101: The Complete Guide for Baseball Catchers is the most comprehensive book ever written for baseball catchers. It contains tips, drills, and proper mechanics that will help every catcher or coach better understand the most difficult position on the field. This book contains information on EVERY aspect of catching that Coach Barksdale has learned through his years of experience from coaching nationally ranked NCAA teams, and playing at almost every level from Little League to professional baseball. A few of the topics covered in CATCHING-101 are: • Receiving • Blocking • Catching Pop Flies • Throwing • Fielding Bunts • Plays at Home Plate • Drills • Pitchouts • Pass Balls/Wild Pitches • Giving Signals • And More! If you have been searching for a source with lots of high quality information about catching, this is the book for you! CATCHING-101 was written by Coach Xan Barksdale who is currently an NCAA Division I baseball coach and an ex-professional baseball player. Coach Barksdale played in the Atlanta Braves organization and has been a featured speaker at the prestigious ABCA (American Baseball Coaches Association) national convention.

Coach Xan Barksdale began his coaching career at the University of Louisville in the fall of 2006 after retiring from a career in professional baseball with the Atlanta Braves. In his first season with the Louisville Cardinals, his team finished sixth in the country with the school’s first ever trip to the College World Series at Rosenblatt Stadium in Omaha, Nebraska. He grew up in Madison, Mississippi where he started to develop a love for the game of baseball at the age of four. He played his first season as a catcher when he was seven years old, and that’s when his love for catching began. He continued to play Little League baseball and travel baseball until he began high school. His high school career was played at Madison-Ridgeland Academy (MRA) from 1997 to 2000. While at MRA, he earned All-Conference honors and was selected as a Mississippi state All-Star. He was a member of the National Honor Society and graduated with honors in May of 2000. Coach Barksdale continued his education at Holmes Community College in Goodman, MS while playing baseball for the Bulldogs under coach Kenny Dupont. At HCC he continued to learn the game of baseball while earning an Associate’s degree in Engineering in May of 2002. He was also a member of Phi Theta Kappa Honor Society. After his playing days at HCC, he pursued his bachelor’s degree at the University of Mississippi (Ole Miss) and played for coach Mike Bianco. The Rebels were ranked as high as fourth in the country during this time, and they hosted the school’s first NCAA Regional in 2004. After Coach Barksdale’s senior season, he signed a free agent contract with the Atlanta Braves. After his first professional season with the Atlanta Braves, Coach Barksdale returned to school to complete his bachelor’s degree. In May 2005 he was awarded his Business Administration degree from the University of Mississippi, with an emphasis in Marketing and a minor in Math. He was also a member of Phi Sigma Pi National Honor Fraternity. From 2004 to ¬2006, he wore a Braves uniform and spent time playing in the Gulf Coast League, Appalachian League, South Atlantic League, and the Carolina League. In 2006 he decided to retire from playing professional baseball in order to pursue a coaching career. He was offered his first coaching position by coach Dan McDonnell, who had been an assistant coach on staff during Coach Barksdale’s time at the University of Mississippi. Xan Barksdale has spoken at camps, clinics, and conventions all over the country. He was honored as a guest speaker at the 2011 American Baseball Coaches Association (ABCA) national convention in Nashville, TN, where he spoke on the topic “Preparing Catchers for Success.” In addition to being an author, he has built the website Catching-101.com that provides instruction to catchers and coaches of catchers. He also developed the Catcher’s Thumb product and the Catcher’s Performance Summary application for the iPhone, iPad, and iPod Touch.