Tho' It Were Ten Thousand Miles

by William H. A. Williams 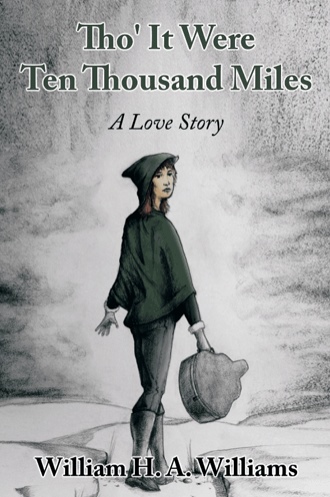 [Twenty-year-old college student Fiona has moved in with Seamus, whose sixty-five-years have not dimmed his ardent Irish Romanticism. But Fiona's busy schedule cuts into their love affair--and then into the World Cup. NOTE; in the books dual narrative, Fiona's internal voice is placed in the indented paragraphs.]

As we got further into summer there was a serious scarcity of Fiona. The spring semester had barely ended before she had to plunge into rehearsals for the college's summer theater season. With Fiona's increased absence, I took some solace in the fact that it was time for soccer's quad-annual World Cup matches—several weeks of back-to-back international matches, all carried on the telly. Of course, I would rather have had Fiona twenty-four/seven, but, the World Cup was not the worst possible substitute for her. However, as it came down to the final weekend matches to decide the Cup, Fiona's rehearsal schedule inexplicably eased up, and I had both Fiona and the soccer championship to deal with simultaneously.

This would have been the best of all possible worlds had my beloved understood or cared anything about the "beautiful game." Alas, she did not. And she could not seem to understand why I would suspend operations with her for a few hours just to watch some guys kicking around a ball. I pointed out that entire seasons of American football, baseball and basketball could go by without my giving them a single glance. Unlike most women in America, her evenings and weekends with me were totally free of any competition from televised sports. Just once in four bloody years....

I did my best to explain the game, discuss the fine points, and yell encouragement or condemnation at the appropriate moments. Nothing seemed to matter. She was unmoved.

Yeah, I remember. It was the Sunday of the final match to decide the Cup or whatever, and I finally had a day off. All that week there had been rehearsals during the day and performances most nights. By the time I'd get back to your place, I'd be too tired to do much more than have a bite to eat and go to sleep. So this Sunday, I was interested in a more exciting life than your dorky World Cup could offer.

There is a Women's World Cup, I volunteered, hoping to stir some interest in her. "Where are they?" Fiona asked. Where are who? "The women." They already had their competition—last year, or maybe it will be next year. Anyway, we'll watch it next time it comes around. "When?" I don't know when! Not this weekend, I grumbled. She was getting on my nerves.

She watched the first part of the match with me, her arms folded across her chest like Sitting Bull reviewing the U. S. Cavalry on parade, and listening to the white man explain how wonderful things would be in just a little while. Then she yawned and began to page through some of the magazines and books we had lying around.

I found this book of poetry. I had never paid much attention to poetry before I had met you. But you had introduced me to some good stuff, and I recognized this one poem we had read a few nights earlier— Andrew Marvell's "To his Coy Mistress." It is a really interesting poem, although it is also very sexist. This guy is trying to get this girl into bed with him, telling her:"Had we but world enough, and time, This coyness, lady, were no crime" ..."But at my back I always hear Time's winged chariot hurrying near;" And, then he tells her that, if she stays a virgin too long, she'll be dead! Lousy bastard! But, at the same time it is a very sexy poem, especially the last verse.

She started giving out about a poem she had found—Marvell's "Coy Mistress." Did I remember it? Of course, I did. We had read it a couple nights ago. However, there was a penalty shot coming up, and at that particular moment poetry was about the last thing on my mind. "Do you remember this part,"she asked, and there was something in her tone of her voice that warned me that the world was about to change.

Then standing up, blocking my view of the screen, she began to declaim: "Now let us sport us while we may; And now, like am'rous birds of prey," Green eyes flashing into mine—"Rather at once our time devour, Than languish in this slow-chapp'd power." Fiona, I said. Stop it. This isn't fair. The bloody World Cup happens only once every four years. Give it an hour, and it will be over. She put the book down, grabbed my hand, and kept on reciting. The wretched girl had memorized the damn thing.

"Let us roll all our strength, and all Our sweetness, up into one ball;"Fiona, please, I begged. Get out of the way. I can't see. "And tear our pleasures with rough strife Thorough the iron gates of life. Thus, though we cannot make our sun Stand still, yet we will make him run." Then she grinned at me in the most fiendish way and handed me the remote.

There were two things in the room that I loved, and I was to kill one of them. Coy mistress me arse! The bloody poem is about how the guy gets the girl in bed, not the other way around. But what choice did I have? Click. Off went the damn telly. Marvell never had the World Cup as an option. Neither, apparently, did I. "That's what you get for leaving wild poetry lying around unattended!" Fiona smirked, as we headed for the bedroom.

Still, when all is said and done, there is something about sex in the afternoon that is so damned bloody outrageous, so totally against divine order and universal structure —it's like thumbing your nose at the whole bloody world—including the World Cup. And which one of us was it who shouted "Goooooooooooal!" at the appropriate moment?

Where on earth did all of that come from? I had never, ever dragged anyone off to bed before. In our relationship you were usually the one who initiated our sex. I was often happy enough with a good cuddle. But there I was, hauling you off to what you would have called a right good tumble in the haystack. From coy mistress to sex maniac? What had you done to me, Seamus? Given me confidence, that's what... confidence that I could tear you away from your precious soccer to devote yourself entirely to my pleasure. Wow! That was some gift! And, yeah, we did make our sun run...although I am afraid that eventually he outran us.

Seamus O’Rouke’s obsession with a girl he discovers on You Tube turns into love when Fiona MacKenzie turns up on his Midwestern campus. While the sixty-ﬁve-year-old Irishman’s pursuit of this twenty-year-old folk singer is against all reason, rhyme does play its role. Seamus is adept at wielding poetry, as well as music, art, gourmet meals and ﬁ ne wine, in his campaign for the heart of his green-eyed auburn-haired beauty.

Fiona is haunted by the earlier death of her Scottish father and by the resulting loneliness, which she tries to hide beneath her usually self-conﬁdent exterior. She tries to keep from being overwhelmed by Seamus’ larger-than-life personality. Gradually, however, her skeptical common sense gives way before the onslaught of this unreconstructed Irish Romantic.

During their brief months together, this age-crossed pair discovers that romance is a tightrope strung between incomprehension and farce. As told through a his/her dual narrative, these two head-strong and highly articulate individuals continuously collide, often comically, as they struggle to comprehend the nature of their love. In spite of moments of often bawdy comedy, questions of love, age, loss and death thread their way through the story. As Fiona observes, “What strange ways love has of going about her business.”

William H. A. Williams is a historian, writer and musician, living in Cincinnati. Tho’ It Were Ten Thousand Miles is his first work of fiction. The Irish elements in the novel—the male protagonist’s vocabulary and speech patterns, bits of folklore and songs, references to Dublin and the West of Ireland—are based on the author’s knowledge of and experiences in Ireland. In addition to American and German universities, Williams taught at University College, Dublin, and spent his summers in a thatched cottage in West Donegal.

Apart from H. L. Mencken and H. L. Mencken Revisited (Twayne, 1977, 2001), most of Williams’ academic work has dealt with Ireland and Irish America. He is the author of ‘Twas Only an Irishman’s Dream: Images of Ireland and the Irish in American Popular Song Lyrics, 1800-1920 (University of Illinois Press; recipient of an ASCAP award, 1996) and Landscape, Tourism and the Irish Character: British Travel Writers in Pre-Famine Ireland, 1750-1850 (Wisconsin University Press, 2008). His latest book, Inventing Irish Tourism, The First Century, 1750-1850, was published in 2010 (Anthem Press, UK). Williams edited for publication Daniel O’Connell, The British Press and the Irish Famine: Killing Remarks, written by my late wife, Leslie A. Williams (Ashgate Press, UK, 2003). The author was also a researcher and consultant for The Long Journey Home, the PBS series about Irish America.

In addition to his academic work, Williams has also engaged in freelance journalism. His articles and reviews have appeared in Irish and in American newspapers and magazines. While in Ireland he wrote the monthly “Letter from Dublin” for the Baltimore Sun. Most recently, he has been a North American stringer for Irish Music Magazine.

As a performer, Williams have presented his program of Irish-American songs at Irish festivals and on campuses around the country. His musical, Maggie Murphy’s Home, has been staged at the Milwaukee Irish Fest and in Cincinnati. He is a member of three folk groups, including Ceol Mhór, a Cincinnati-based Irish band.