A USAR Paramedic’s Experiences after the Terrorist Attacks on September 11, 2001 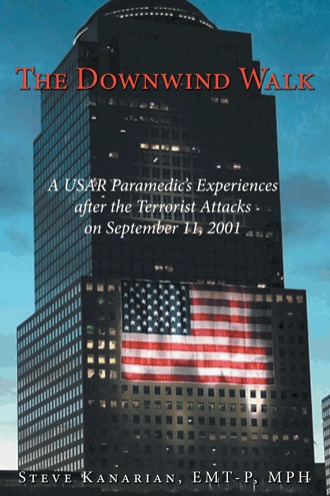 September 11, 2001 is a day in American history that has left an indelible memory on all who experienced the aftermath of the terrorist attacks on the World Trade Center in New York. Within the inner circle of New York City Emergency Medical Services (EMS) there are stories told of caring, dedication and sacrifice by EMTs and paramedics at the World Trade Center.

“Everyday Heroes” is a term used to describe EMTs and paramedics who care for patients regardless of race, color, religion or social status and do it without recognition. September 11, 2001 demanded EMTs and paramedics to give their utmost caring, courage and dedication. Some EMS providers also gave their lives during the collapse of the World Trade Center. This book documents the stories of some of the EMTs and paramedics who took the downwind walk to rescue victims of this tragedy. Their spirit represents the best of EMS.

I was a member of the EMS FDNY (Fire Department of New York) in the Bronx who was deployed with the Federal Emergency Management Association (FEMA) at Ground Zero. I feel privileged to have worked with so many EMTs and paramedics who shared with me the details of their experiences on September 11, 2001. I believe my unique role during the tragic events gives me a vantage point from which I can share some of these stories and lessons learned.

I am proud to have worked with several of the EMTs and paramedics who gave the “ultimate sacrifice” or succumbed to exposure in the months following the collapse of the Twin Towers. I feel that since I knew so many of these people, I have a responsibility to share stories not only about their circumstances on 9/11 but also how we knew them in life.

Many EMTs and paramedics are struggling to put these events behind them and forget the tragedy of that ominous September morning. I have looked back on that day to try to reconcile the magnitude of this horrendous tragedy. After mentally reliving the sights, sounds, and smells and sifting through the debris of that September 11th, I feel that caring and courage alone are the only things left intact among the ashes. I think it is important to tell the EMS story so those who want to know how EMS providers dealt with this tragedy can understand the breadth of caring and the depth of our loss.

Because these acts of courage show humanity at its best in the worst moments in the history of our country, they serve as a source of inspiration and hope that shines like a lone ray of light out of the smoke and dust of Ground Zero. Courage in the face of adversity is a source of inspiration for us and, therefore, these stories should be shared. While September 11, 2001 is a unique American tragedy, dealing with devastation is a common theme. I feel that humanity can be strengthened by the examples of the courageous EMS providers who have gone before us.

I am writing this book so future EMTs and paramedics will know the individual acts of caring and dedication of my brothers and sisters in EMS. I would like to share with them stories of how we dealt with this horrendous incident so they may learn from our experience. These “Everyday Heroes” who gave the ultimate sacrifice, survived the collapse of the Twin Towers, or helped with the rescue efforts provided care that was anything but every day routine.

Some EMTs and paramedics who were not at Ground Zero feel they did not make worthwhile contributions. However, the providers who helped by responding to 911 calls or helped fallen coworkers made a significant contribution to patient care and public service. By sharing these stories of caring and dedication by EMS responders, together we can appreciate the untold acts of selflessness which exemplify the best humanity has to offer in the worst moments of people’s lives.

We in EMS want the public to know they we are not icons; we were people with real lives who went to work one day in September. I want these EMTs and paramedics to be remembered as more than faces on a poster, or names read out loud every anniversary of the tragedy. Equally important, I want the EMTs and paramedics who died after September 11th whose names are not read out loud each anniversary to be remembered.

After hearing the stories of those who perished, we realize the seemingly random events that claimed their lives could have also taken our lives. This realization is what makes the events of 9/11 most startling to those who of us who were there. Chief Daniel Nigro spoke at the EMS memorial service held at Saint Paul’s Chapel in May of 2002. I have heard no statement truer than Chief Nigro’s concerning the psychological impact of 9/11 when he said, “…this one will be with us the rest of our lives.”

People have heard the popular stories of September 11, 2001 that tell of heroism on airline flights, in the Twin Towers and at the Pentagon. I believe it is important for Americans to know of the sacrifice and dedication of EMS responders, as well. Now is the time to share their stories and to teach the lessons learned as the 10th Anniversary of 9/11 looms on the horizon as ominously as the smoke and dust filled the atmosphere after the collapse of the Twin Towers.

Come take the downwind walk with me in my dusty boots as I recount the events, sights, smells, and vivid memories of that unforgettable September, from eye level at Ground Zero.

The Downwind Walk lets you experience the tragic events following the terrorist attacks on the World Trade Center in New York on September 11, 2001 through the eyes of an Urban Search and Rescue (USAR) paramedic who went into harm’s way to rescue the victims, which rapidly included many of his “brothers” and “sisters” of the New York Fire Department (NYFD) and Emergency Medical Services (EMS).

The author was a member of the EMS FDNY in the Bronx who was deployed with the Federal Emergency Management Association (FEMA) USAR team at Ground Zero. He went downwind with the USAR team after they set up operations and donned the proper protective clothing and breathing protection. Their mission was to take a first hand look at that mass casualty incident (MCI), assess the damage and losses, and make an estimation of resources needed to mitigate the incident. The reader is invited to take the downwind walk with Steve as he recounts the events, sights, smells and vivid memories of that unforgettable September ….. from eye level at Ground Zero, in his dusty boots.

In this book, you will read stories about EMTs and paramedics who were at Ground Zero with the author, including some who were wounded or traumatized and others who made the “ultimate sacrifice.” You will also learn about NYFD EMS personnel who made a significant contribution to patient care and public service by responding to numerous 9-1-1 calls or assisting fallen coworkers that week despite extremely stressful working conditions.

No doubt you have heard the popular stories that tell of heroism on airline flights, in the Twin Towers and at the Pentagon. It is also important for future generations of Americans to know about the sacrifice and dedication of NYFD EMS first responders. Now is the time to share their stories as the 10th Anniversary of 9/11 looms on the horizon as ominously as the smoke and dust filled the atmosphere after the collapse of the Twin Towers.

Steve wants future EMTs and paramedics to know about the individual acts of caring and dedication of the EMS first responders at Ground Zero. He also would like to share with them stories of how EMS dealt with this horrendous incident and lessons learned from the catastrophic consequences of that MCI so they may learn from their experience.

About the Author Steven Kanarian is an accomplished EMS professional with over 25 years experience. He was trained as a paramedic (EMT-P) at Northeastern University. Steve earned a Bachelor of Science (B.S.) degree in Organizational Management at Nyack College and a Masters degree in Public Health (MPH) at New York Medical College. Steve has been a paramedic since 1984. Steve was a Medical Specialist with the Federal Emergency Management Agency Urban Search and Rescue (FEMA USAR) New York Task Force – 1 from 1991 to 2009. He has been an EMS Educator since 1994. He has taught EMS courses. Steve currently teaches paramedics at the City University of New York and LaGuardia Community College. In 2009, Steve retired from the New York City Fire Department, EMS Command as a Lieutenant after 25 years of service. He is a freelance writer and lecturer who has published articles and given professional presentations on pre-hospital care, EMS education, supervision and MCI management topics. He has published articles on EMS and management including: “Assessing the learning objectives of EMT's and paramedics responding to terrorist incidents” and “The psychological aftermath of terrorism.” Steve served as Chair of the Research Committee for the National Association of EMS Educators (NAEMSE) from 2006 to 2009. Steve’s areas of specialty are paramedic education, MCI management and EMS supervision/leadership. He is available for lectures, consulting, and special projects on these topics.