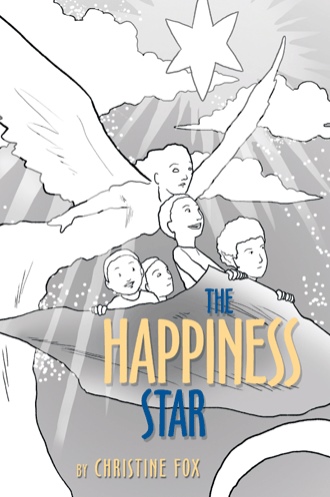 The Happiness Star is the biggest and brightest Star in the Heavens. It shines over the whole world, and it’s beautiful rays reach out to every single corner of the earth.

John was 10 years old. He was very unhappy because his dearly beloved Grandad was very old, and very sick. John did not know the name of his illness: all he had been told by the grown-ups was that Grandad’s life was coming to an end.

John felt devastated, for he was very close to his Grandad. They used to go for long walks together, where Grandad would point out the names of the early spring flowers growing in the hedgerows. He also pointed out the names and sounds of the different birds. Sometimes, if Grandad was feeling up to it, they would go cycling together, and Grandad managed to reach quite a high speed, despite everybody telling him to be careful!

He was a fun Grandad. Very jolly. A great friend. Someone whom John loved being with, and someone he could tell all his secrets to.

Now it looked as if all that was coming to an end, and John just did not know what to do. He was overcome with grief. The grown-ups weren’t much help because they kept saying silly things like ‘’oh but he is very old you know, and we all have to go at some time’’. John thought this was a very silly comment, and it did not comfort him at all.

He then suddenly remembered something Grandad had once told him about the Happiness Star. He couldn’t remember everything he had been told, except that Grandad had said that it was the biggest and brightest Star in the Heavens, and that if you reached out to it when you were in need, it would enfold you immediately, and send light and happiness to your problem.

The stories for this book originated when her children began asking her what happened when people left this life and passed on to another one. Christine realised that many children did not understand death, or how life could continue after the death of the physical body. This book is written for the purpose of removing any fear that may arise, and showing children that their loved ones continue to live in the after-life, in the spiritual world.

Christine Fox is a mother of two grown up children, and a grandmother to one. She first began writing stories when her children were young. In those days these stories were mainly for them. During car journeys she would ask the children to think of a subject, and she would then create a story around that subject. These stories became a way of life for the chidren, and over the years the subjects grew wider, and the stories became longer. Even though her children are now grown up and have left home, she is continuing to create stories, only this time for her grandson. Christine lives in a little village in Bedfordshire, England.