Food Allergies: A Recipe For Success At School

Information, Recommendations and Inspiration for Families and School Personnel 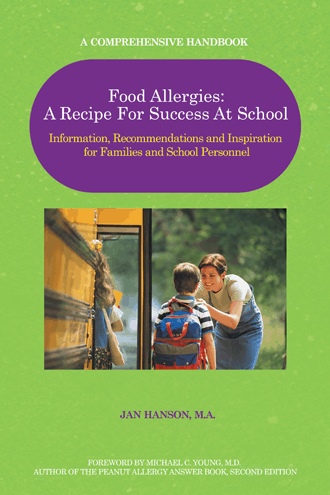 “Any commitment is only as good as the most knowledgeable, determined, and vigorous person on it. There must be somebody who provides the flame.” Lady Bird Johnson

Going To School with Food Allergies: A 3-Step Plan for Food Allergy Management

Most parents, when sending their child off to school, are typically interested in investigating such things as class size, teacher student ratio, quality of curriculum, etc. Parents of children with food allergies, however, although they may share these same concerns, must also take into consideration several other critical factors when investigating the merits of a potential school for their child to attend. They need to make certain that the school environment is not only educationally sound, but will also provide a safe environment for their child. For parents who are sending their child with food allergies off to school for the first time, this can be a particularly difficult and frightening prospect.

School staff must also address these same concerns as they contemplate the entry of a student with food allergies. Meeting the special needs of a student with food allergies is a multi-faceted and often time-consuming task. It is, however, the school’s responsibility to look for ways in which to keep their student population safe, including those children with life-threatening food allergies, while also promoting an atmosphere which allows the students to thrive in all aspects of their education. It is a fair expectation on the part of all parents that schools will be prepared and knowledgeable to meet this obligation. Every child is entitled to feel safe at school and be fully engaged in all of the activities available to them. The information included in this chapter demonstrates the challenge this concept presents, and highlights practical recommendations for developing, implementing and maintaining a comprehensive food allergy management plan intended to enhance the safety of students with food allergies.

Chapter One presents an overwhelming abundance of evidence which allows us to conclude that: 1.) the number of school-aged children with food allergies is significantly high and increasing, 2.) the symptoms of an allergic reaction and anaphylaxis can be profoundly devastating, and 3.) the school environment presents a real risk to the safety of students with food allergies. Data suggests that it is likely a student with a food allergy will, at some point, experience a food-related allergic reaction at school. Support for this disturbing conclusion may be found in the results of a important initiative begun by the Massachusetts Department of Public Health (MA DPH), School Health Unit, during the school calendar year 2003-2004. A Massachusetts state regulation, 105 CMR 210, has mandated since November, 2003, that schools must file a report with the MA DPH whenever epinephrine has been administered. Since 2003, the MA DPH has annually collected and analyzed data reported to them by both public and private schools across the state of Massachusetts regarding their use of epinephrine for the treatment of allergic reactions during the school day (reports are titled: Data Health Brief: Epinephrine Administration in Schools).

Analysis of the data from the academic years 2003-2004 to 2009-2010 demonstrates that annually, there have been between 133 and 225 administrations of epinephrine during the school day reported, resulting in a seven year cumulative total of 1,118 administrations of this lifesaving medication. Although each year there has been a small percentage of adult staff treated with epinephrine, the overwhelming majority of individuals who have required this treatment are children between the ages of five and eighteen. Although epinephrine was used to treat allergic reactions to such things as food, bees, latex and medications, food appears to have consistently provided the largest percentage of instances where epinephrine was required. The data also reveals that while symptoms of allergic reactions occurred most frequently in the classroom, no area of the school environment has been without risk. Students experienced symptoms of an allergic reaction in virtually all areas of the campus, including in the cafeteria, on the playground and on the bus. One surprising and equally alarming statistic is that each year, between 20–27% of individuals who have needed epinephrine to treat anaphylaxis are individuals not previously identified to school staff as having an allergic condition.

The importance of these annual reports for Massachusetts schools cannot be overstated. If these reports in any way reflect similar occurrences in other states where large numbers of students are experiencing allergic reactions which require treatment with epinephrine, then their relevance becomes even more significant. The hard data and analysis provided by the MA DPH in these reports should serve as a tool to aid all individuals interested in understanding the epidemiology of epinephrine administration at school. In addition, the resulting information may greatly contribute to a better understanding of the risks food allergies present for children who have this health condition, and indicate more productive ways to reduce exposure to allergens at school so that the incidence and trauma of anaphylaxis can be significantly reduced.

The MA DPH’s annual report documenting the epidemiology of epinephrine administration for the treatment of allergic reactions in Massachusetts schools, when combined with the results of studies shared in the previous chapter, provide strong and clear evidence that children with food allergies are continuing to be exposed to their allergens at school and are experiencing anaphylactic reactions as a result. Although the standard treatment for anaphylaxis is epinephrine, it cannot always be counted on with absolute certainty. Dr. Hugh Sampson, a leading researcher in the area of food allergies, and an allergist at Mount Sinai Hospital in New York, reported that 7% - 10% of individuals died from food-induced anaphylaxis despite prompt treatment with epinephrine. The results of this study should make clear the fact that treatment with epinephrine cannot be relied upon as the primary or sole focus for food allergy management at school.

Too many children are having allergic reactions and anaphylaxis at school, often as a result of a lack of preparation and understanding. Each reaction is traumatic for the student who experiences it, for those who witness it, and for school staff who treat the child in the throes of this life threatening event. This important and comprehensive book presents straightforward information and recommendations for managing food allergies at school. Specifically covered are: ► A general overview of food allergies, including treatment and current research. ► A 3-Step Plan for school food allergy management. ► The process involved to develop a school district life threatening allergy policy. ► A thorough explanation of the laws that protect food-allergic students. ► The emotional impact of food allergies, including recommendations to support healthy coping strategies for the child and family. ► Practical tools, such as an Individual Healthcare Plan form, and a template for Recommended Standards for School Food Allergy Management. ► Highlighted excerpts written by parents and professionals offering their insights and experiences with food allergies. This book is required reading for parents and school personnel who are faced with the challenge of keeping children with food allergies safe at school.

Jan Hanson founded Educating For Food Allergies, LLC, and has been providing consulting services and educational workshops to parents and school personnel since 2001. Ms. Hanson graduated from Mount Holyoke College, has her Master's Degree in Higher Education Administration from Boston College, and has two sons with food allergies.