Memories of a Glasgow Pub Stocktaker 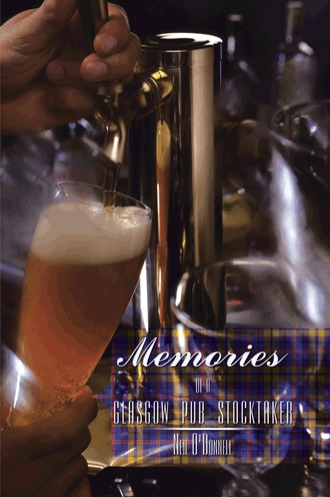 Bernie kicked the front door of The Bally Arms. Bang, bang, bang.  Damn it! The padlocks are still on, no one here yet.  It was a cold, wet, , November morning.  Bernie was a self-employed licensed trade stock taker, doing stock checks mainly for pubs, clubs and hotels.

You won’t get anybody till 10 o’clock”, said the dishevelled old man passing by, judging by his colour, it looked like he had liver problems, possibly a Bally Arms regular

“He should be here at bloody nine O’clock.” Bernie said to himself.  You phone the owners to make an appointment and agree a time, but half of them had a memory that the proverbial hen could match.   The Bally was in a run down part of .  It was once a gold mine, they say, a really busy pub.  A cinema on one side and a Bingo hall on the other, the days before bingo halls were licensed.  It was always busy in those days but now it was under compulsory purchase from the council.  The owner was John McMahon, a tall, lean, white bearded man, in his early sixties.  He had made a handsome living from the Bally, but was now going through the motions He lived on the south side of the city in one of the posh parts, about a twenty-minute drive from the pub. Bernie paced up and down, occasionally taking shelter in a nearby doorway from the biting wind.   The pub was on a main busy main road and it was not possible for Bernie to return to his car and still view the front door. He had luckily found a parking space five minutes’ walk from the pub.    Passing traffics drivers peered out their windows as the morning rush hour slowly rolled by, most of them probably wondering what this loony is doing waiting outside a pub that is obviously closed. Bernie felt like holding a placard up STOCKTAKER HERE WAITING ON OWNER   Nosy cunts. Get to your own work and never mind staring

“Is John, no here yet?” It was the cleaners, Sadie and Betty, two women in their late fifties who cleaned the pub every morning, mopping the floors in the bar and toilets, and generally clearing up the rubbish from the previous night. They were both well wrapped up with long dark coats and headscarves to protect them from the elements.

“No, not yet.” replied Bernie. Trying not to sound too angry

“Does he know your coming?” Sadie queried, with a disinterested tone

“Yes, I phoned him three days ago.  He said he would be here at nine.” Bernie cursed inwardly.   As if I would be fucking standing here for the good of my health.  It was now nearer ten

“He never said there was a stock check on this morning.” said Betty, “not that he tells us anything.” She drawled. Bernie bit his lip as he knew the cleaners probably had this wait every other morning. Some publicans gave the cleaner a set of keys which allowed them to make an early start, but this pub had no such arrangement for good reason

“Here he comes now” said Sadie, as John the Bally Arms owner, looking like he hadn’t shaved or washed, closed the door to his car and came rushing over. His attire belied his wealth, an old pair of what looked like army trousers, a long beige coloured worn out cardigan, with duffle coat buttons, brown fading suede shoes, and a deerstalker checked hat that would look okay on a scarecrow

“Sorry I’m late folks, didn’t get out of here till after two o’clock last night.  There was a fight in the Lounge, tell you about it when we get in” he mumbled as he unlocked the various padlocks to the front door What a waste of time all these metal bars and padlocks, thought Bernie, the pub had been broken into more times than a pensioner’s savings.  They always came through the flat roof above the pub or the side windows from the semi derelict street that ran adjacent to the main road. The cheap cameras he had fitted inside the premises were no deterrent; in fact, they were now dummies, as the originals had been stolen.  John hurriedly switched off the alarm as Sadie and Betty switched on the lights, and the kettle

“You’ll be ready for a cup of tea Bernie, you must be frozen.”

Bernie Burns is a Licensed Trade stocktaker.  The book highlights his visits on stock check day which is a vital part of keeping the business viable.  The sometimes serious and humorous problems connected with the everyday running of a pub/club are highlighted i.e staff fiddles, the Vat man and dodgy customers.

He has 25 years experience of behind the scenes on stock check day in the Licensed Trade.