My Life With The Scorpion Kitten 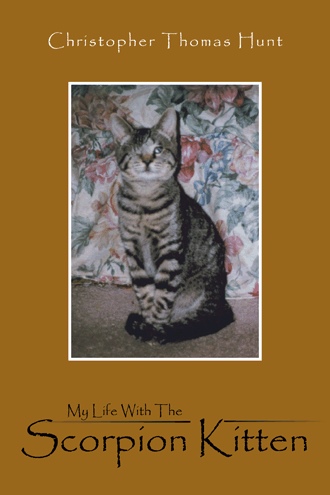 As I begin to write, it is the day after the worst day of my life. September 6, 2008, the day I lost the one person that held my life together. The one person who cared about me no matter what, and who I looked to whenever things were bad. The one person I could count on to be by my side through anything, good or bad, that I may have to face. My cat, Mathias. It was a day I feared and knew would be here before I could ever begin to be prepared for it. A day which I have dreaded all of his life. A day in which I have been more miserable than any other time in my life. A day which I'm not sure how to move on from. Humans are odd creatures. They are caught up in the business of everyday life, setting a pace that doesn't allow them to truly enjoy what they have. Which doesn't always let them appreciate the people that may touch their lives. They are always looking for someone special to add meaning to their lives. Most are lucky enough to find that within family or friends. Some never get that lucky. Some may even find a spiritual happiness that comes through believing in God. I have always been fortunate in that respect. God has given me countless blessings in my life. I can't begin to thank Him for all that He has blessed me with; a wife, friends, family, a home, and a career. How then, can I feel so devastated? I've always had a special bond with cats. I have never been exactly like most humans. I grew up with a different outlook on life, one that most people could never understand. I grew up trying to find the good in everything and trying to be positive in my outlook on life. Too bad there are so many negative people in the world to ruin such an outlook. Most people always looked me at as kind of an oddball, quiet, and underestimated. Growing up on a farm, I was kind of isolated from the world. My family never thought I would amount to much, or so they told me often enough, except for my grandparents. So often that I began to believe it until I was older. My cats never saw me that way. People can learn a lot from cats. Most people don't care to believe that. I do. Although I had friends, I was always a loner. My cats were my friends and eventually my family as much as any human family. As I grew up with my cats they accepted me as much as anyone I have ever known. I learned from them, and they were always there when I needed them. They shared my life, and I theirs until that life would pass. There are four basic truths I learned from cats: 1.) They don't lie to you. 2.) They don't laugh at your thoughts or ideas. 3.) They always love you no matter what you have done wrong. 4.) They never hurt you until they die. I've grown up a lot since those times. I gained confidence in myself. I've managed to become a "productive member of society". I'm socially acceptable by most people's standards. I have a good job, a home, a wife, and soon, children. However, I've never lost that bond with my cats, which brings me to Mathias. Mathias has been a special part of my life for the past five years. Five years that went by too quickly. We've depended on each other since he was two weeks old. He was a very special cat, and I'm not ashamed of how much I will always love him. He was blind, and born with the feline leukemia virus, which caused him to have a shorter life than most cats would, but he lived an extraordinary life. I miss him.

The title of the book is the briefest summary of what the book is about. Mathias was a kitten born with the feline leukemia virus, a deadly disease among cats. Besides this, he was the runt of the litter and eye infections from the time his eyes opened caused him to need one eye removed, and to be blind in the other. Despite this, he grew to adulthood and lived an extraordinary life before dying at five years old. To watch him interact with his surroundings and other cats, a person would hardly know he was blind. Mathias came into my life at a time of great personal difficulty. I was dealing with the deaths of my father and both grandmothers, and also having many doubts about where my own life was heading. Simply put, he brought hope into my life when I felt life was starting to be hopeless. We formed a special bond together, and this book is about his life and how it changed mine.

Chris Hunt is a life long resident of Clermont County, Ohio where he grew up on his parents' horse farm. He and his wife, Tina, have lived in the Owensville vicinity since they were married. Chris attended the University of Cincinnati where he received an associate's degree in education. He went on to receive a bachelor's degree from Northern Kentucky University, majoring in elementary and special education. Chris began teaching for Western Brown Local Schools in 1998, where he has taught special education, language arts, history, and social studies. He attended classes part time through Wright State University to receive his Master's Degree. Chris has been very active in the 4-H program in Clermont County for the majority of his life, taking part in 4-H camping programs, advisory committees, and club activities in which he has been a 4-H advisor for 25 years. He and Tina have had their own club for 10 years, and are also consultants with the Clermont County Junior Fair Board in the dairy cattle and small animal programs. Chris is also very active with the Masonic Lodge. Chris and Tina have always been greatly interested in animals, especially cats and dogs. In addition to helping some of the many local strays they have taken in, they also donate to animal rescue groups whenever possible.