First Contacts with People in Crisis and Spiritual Emergencies 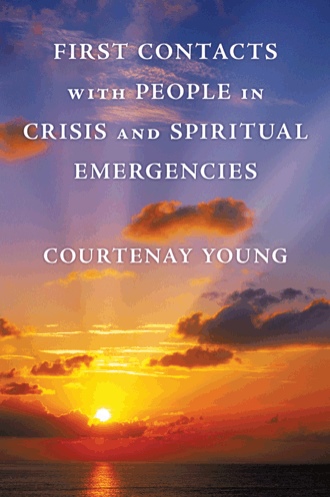 A frequently asked question is: “What is the difference between a Spiritual Emergency and a psychotic episode?” Part of the problem of differentiation is a cultural one. We live in such a very materially and medically orientated culture that it is sometimes very difficult to step outside of these paradigms and the parameters usually blind us and bind us. When we do so, voluntarily or involuntarily, we have no positive images or support to reinforce our journey, nor any routes or maps for our process. We thus resort to the ‘normal’ negative images of people in crisis – either as being sick, mentally ill, or just crazy – and this (‘normally’) means that we need to separate ourselves from such people and exclude them from us, or even protect ourselves from them. Nowadays we may also think that we need to protect them!

Just to suggest that we could perhaps re-frame these extra-ordinary processes into a much more positive light is pretty radical, even without actually trying to do so. To suggest that we might perhaps actually involve ourselves in these peoples’ psychic processes and possibly even interact with them, or maybe even learn something from them, is seen by some very well-established professional people as totally off-the-wall. If one goes a step further and actually does something, there is sometimes even an accusation of acting unprofessionally to ensure that one keeps in line. But ‘off-the-wall’ and ‘out-of-line’ is sometimes where people actually are when they are in their crisis, or in a Spiritual Emergency, or whatever you like to call it, and maybe we (the professionals) need to be able to step into these areas in order to reach these people, and to find out more about where these places are, and what rules exist there, in order to help them better.

Some different cultures go so far as to elevate those amongst them who have such spiritual experiences themselves by allowing them to become their shamans, priests & priestesses, visionary leaders, or even gurus, whereas we in the Western World, as a culture, usually actively discriminate against those who have such experiences. We think they are crazy; we medicalize them (at best); we sometimes even take away their citizen’s rights and incarcerate them (as well), or “re-arrange them till they are sane”, chemically, electrically or surgically (at worst). How a particular culture treats its children, the poor, the criminal and the insane is often an indication or a reflection of its nature (see the work of Michel Foucault). How these people are treated often does not show the essential goodness or civilized sophistication of that society. Those different, more primitive, cultures have either learnt, over time – or have never lost the fact – that their society can actually benefit from such peoples’ processes, or it even needs such people, and cannot survive healthily without them. So, just maybe, many of us all have a lot of work to do, turning some of our prejudices around.a

Imagine a culture – just for a moment – where normal teenage puberty and adolescence is essentially denied: variations of this process are seen as illnesses needing treatment. Instead of saying: “Oh, dizzy spells and puppy fat are perfectly normal. They’ll pass”, we would get a situation where the growth of breasts would mean a mastectomy; and beards, pubic hair and underarm hair would mean extensive depiliation, or chemical treatments to inhibit the growth of hair.

This is a practical handbook and guide for people who are experiencing various sorts of psychological, emotional & spiritual crises; spiritual emergence processes; or Spiritual Emergencies. It will also be of particular interest to their carers, family members & other therapists.

It is written in an open-minded, pragmatic, well-researched, and occasionally humorous manner, and is based on 30 years of personal and professional experience in the field. It is comprehensive and well-researched.

As a compilation of perspectives and strategies (both mainstream and alternative), written over a longish period and added to and adapted regularly, it covers many different aspects of the whole field of human growth and change: psychological, transpersonal, emotional, practical, and spiritual.

It is therefore an absolute ‘must’ for anyone working with people in these states, or anyone with friends or family going through one of these processes.

ABOUT THE AUTHOR: Courtenay Young is an experienced Humanistic, Transpersonal & Body-Oriented UK accredited Psychotherapist, who has worked in various different situations in the mental health field for about 30 years. He has worked in psychiatric hostels, and with psychiatric & socially disadvantaged adolescents. He was the resident psychotherapist at the Findhorn Foundation (an international spiritual community located in north-east Scotland) for over 17 years, and is now working in the UK National Health Service, in various GP practices and departments of Clinical Psychology, and in private practice, in and around Edinburgh, Scotland as a Counsellor, and Psychotherapist. He was the Regional Co-ordinator for Scotland of the Spiritual Emergency Network and writes books and articles, gives training seminars, conference lectures and workshops on Spiritual Emergencies for psychotherapists in the UK, Europe and the USA, and works individually with people in spiritual crisis and emergencies. He and his wife, Laura Hope Steckler, a Clinical Psychologist and Psychotherapist, have run weekend and week-long residential workshops at Findhorn, Germany and elsewhere, entitled 'The Spirit of the Body', a combination of spiritual emergence work, movement exercises, and body-psychotherapy. Courtenay Young is on the Editorial Board of a couple of journals and is Editor of the International Journal of Psychotherapy. He has already had one book published "Help Yourself Towards Mental Health" (Karnac Books, 2010) and this is his second published book. He also publishes books on Body Psychotherapy: www.bodypsychotherapypublications.com He is currently writing a much larger book on Spiritual Emergencies for publication, entitled "When the World Changed", as well as other books and articles, many of which are on his website: www.courtenay-young.com. He can be contacted by e-mail: courtenay@courtenay-young.com