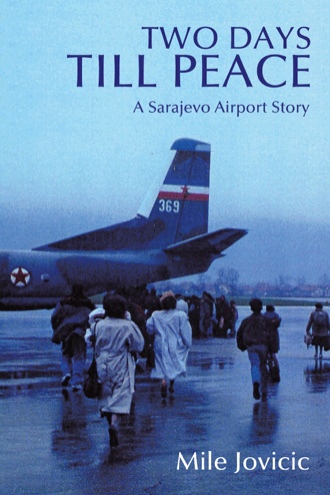 This book is a survival story and an account of the beginning of the war in Bosnia and its capital, Sarajevo, in 1992. It is an account of people trying to do good things as chaos was in the making. The scene is Sarajevo Airport, the most important strategic point of the upcoming war, where people rushed to flee the battles in the city. The airport is one site of important meetings of the Bosnian political leaders in the attempt to prevent the war. The book sheds new light on who was for war and who wasn't, and how the war happened, despite, or because of, the involvement of foreign countries. It also shows how the doors were opened for the UN to take over the airport and to use it for bringing humanitarian aid to Sarajevans and help them survive a horrible war.

“This is a fascinating and gripping survival story. The book describes what it was like to live day by day in a city undergoing the beginnings of a terrible civil war where one did not know what was going on from one minute to the next and there was danger at every corner. Neighbors, old friends and colleagues suddenly became enemies and whether you liked it or not you were forced to take sides. The author tells his story with suspense and honesty. He did a remarkable job in keeping the Sarajevo Airport operational against all odds and in doing so was able to help thousands of Sarajevans flee the horrors that quickly overcame the city. A truly fine read.”
—James Bissett, former Canadian Ambassador to Yugoslavia

“As the early UN commander in Sarajevo it would have helped a lot if I knew some of the details Mile recounts herein; unfortunately, he was a kilometer away, which during the war was a mighty long and dangerous trip.”
—Lewis Mackenzie, Canadian Major General (Ret’d)

“An extraordinary testimony about the early days of the war in Bosnia from a witness at the very heart of events. Jovicic’s compelling account sheds light on the chaotic situation in mid-1992 and the many missed opportunities to avoid the bloodshed that ensued.”
—Nebojsa Malic, columnist, Antiwar.com

“What a great story, breathtaking! At the Sarajevo Airport the events could have easily spun out of control. The author faithfully recorded many aspects of unreported history that forces us to rethink what really happened in Bosnia.”
—Kent Johnson, US Air Force Colonel (Ret’d)

Mile Jovicic was born in Gucevo, near Rogatica in the eastern Bosnia. He finished elementary school in Rogatica, and then completed technical high school in Sarajevo and graduated from the mechanical engineering faculty of the University of Sarajevo. He worked with a Yugoslav-French engineering consulting company for ten years. In 1985 he became general manager of Sarajevo Airport which position he held until the beginning of the war in Bosnia in 1992. Since May 1993 he has lived in Canada.

In his early school years Mile showed a talent for writing and won a BiH prize.

In his early fifties he had a story to tell and wrote this book.