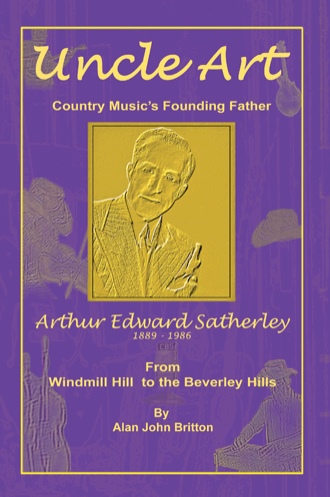 Where to start? At the beginning of course. Sounds easy enough, but it was never my intention to be the writer of Uncle Art. I intended to be someone to spread the word on this historical journey of music with a feeling of “ We should know about this,” particularly in my home city of Bristol, England, and then the rest of the British Isles, once someone else had written it that is. The best laid plans etc, etc. I have written it as if it was a song (it’s what I do), so chapters become verses and so on, giving a musical feel.

There had been several attempts in the past by different people to write a book on this pioneering man, but for various reasons they had not progressed.

Uncle Art Satherley (who was also from Bristol, England) first came to my attention in 1994. Little did I know the impact he would have on my life twelve years later, when I decided it was about time the story was told.

I have written it, as my proofreaders said, “conversationally”, or was that “confrontationally”? No, I think it was conversationally – as if I was telling it over a beer, or a coffee, or a cup of tea and a cake (tea made the English way, hot tea with cold milk, of course!). Anyway, I took it as a compliment. I didn’t want the story to come over as stiff or scientific; there are technical parts as I interweave the history of the recording industry and the part that Art played. The discography is minimal; there are plenty of good works already out there.

There are little bits of light-heartedness, humour, even the odd joke (some might say very odd). To find the right balance and keep it interesting, for whoever in the world will read it, was my plan. Most of all, I wanted to portray what made Uncle Art Satherley tick. From an ordinary family living in Windmill Hill, Bedminster, Bristol, to the Beverly Hills Hollywood lifestyle, it’s a fascinating story of human endeavour. There are parts of his private life that he did not wish to speak of, (except for tantalizing snippets in interviews, that is). It’s all here.

It’s because of Dolly Parton! Yes, Dolly Parton, and an out-of-the-blue phone call, to request help to book her for a concert in Bristol.

That was the starting point of a chain of events that would lead to this journey.

Dolly won’t be aware of this, of course, but then, with her interest in history, the settlers, and their music, who knows? She may become aware.

There was the gig in Bristol with Chet Atkins, a one-off event that turned out to be a major key change, to use a musical analogy.

The introduction is Forrest White’s, written for his book on Art. Being close friends with Art, Forrest was ideally placed to write it, but sadly he died suddenly with only that part written. It is with respect for their friendship that I include it unabridged.

Verse One is called “My Story”; it’s autobiographical, including some history of the port of Bristol and the West Country, giving the reader an understanding of the background of the young Arthur, who grew up in Bristol at the turn of the twentieth century.

And, then, it maps out the life of the man Arthur Edward Satherley, who went on to become country music’s Founding Father – something he did with great dignity and often with acts of philanthropy.

It could be seen that my interest and passion for the subject, discovering codes and shapes in the ancient music, was shaping my life leading to this point. I learned guitar, recognized a certain something in country music, wrote and performed songs, became qualified in electronics, and found out how sound works. I realized that music and electronics were preparing to leap forward together. Then, I took an interest in the history of it all. So here it is, from one Bristolian about another Bristolian. Bringing it all back home.

Are you a country music fan, or a blues, folk, jazz, or rock fan? Better make that “Are you a music fan?”

This is a true story of man – a real pioneer – who was driven to capture the music that came to form the basis of today’s popular music. Art Satherley is referred to in many a biographies of stars from yesteryear.

He was born in 1889 in Bristol, England. This Bristolian travelled the southern states of America recording real American music. He said it was like the music from home. No place was too far or too distant for him to take his primitive recording equipment. He used school halls log cabins, hotels, anywhere – even a funeral parlour – as locations to record. Blues artists such as Ma Rainy, Blind Lemon Jefferson, and W. C. Handy were on his recording log, this list could be a hundred names long. Then, there were the hillbilly, down-home country folk, another long list of now legendary names, ranging from Gene Autry to Roy Acuff to Marty Robbins, that Art Satherley was responsible for.

Arthur worked for the great inventor Thomas Edison at the Wisconsin Chair Company before being installed as recording manager at the company’s record-pressing plant called the New York Recording Laboratory, which included Paramount records as one of its labels. Uncle Art Satherley eventually became vice president of Columbia Records, retiring in 1952, and the history and development of the recording industry are intertwined with Art’s captivating professional journey

Uncle Art’s story is told in it’s entirety for the first time in Uncle Art by a fellow Bristolian and musician Alan John Britton. Britton includes his own background and the discovery of this fascinating story. It includes Arthur’s childhood and schooling and some history of Bristol and the important role that the city’s port played in the movement of settlers and trade to the New World.

Alan John Britton
Music has been a big part of Alan’s life. He remembers sitting on the knee of his grandmother singing “Now Is the Hour” at eighteen months old, leading on guitar lessons from world-renowned jazz player, Frank Evans, during his teens.

By the age of twelve, Alan was playing solo at local venues and went on to join three young ladies in a vocal harmony group called “The Cherokees”.

He continued with the thumb-picking style that Chet Atkins brought to the airwaves. Later, in 1994, Alan presented Chet with “The Gibson Living Legend Award” at a one-off concert in Bristol, England. On two occasions, Alan played the Wembley Arena with Mervyn Conn’s “British Line Dance Championships” with his then band “Country FM”. Alan has a discography of eight albums, with many tracks self penned and recorded in Nashville, Tennessee, and at his own studio in England. He often worked with fellow Bristolian Roger Cook.

The writing of Uncle Art’s story grew out of researching the history of country music for the Chet Atkins’ concert. He was amazed to find that the little-heard-of fellow Bristolian had helped to create early recordings of now legendary names.

Alan lives with his wife, Shirley, and their Jack Russells in the old market town of Chipping Sodbury, South Gloucestershire, England, at the foot of the Cotswold Hills, eleven miles northeast of Bristol City Centre. They have four children, five grandchildren, and counting. www.alanjohnbritton.co.uk