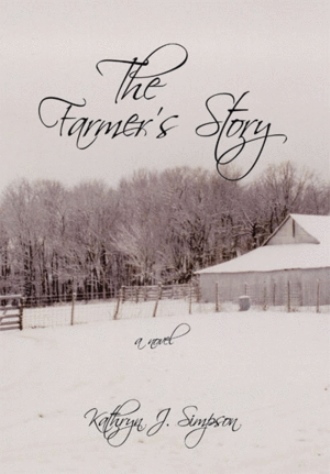 He catches on old George Strait tune on the AM station out of Metropolis as he approaches the S-curve by the Shelton property. He looks up from the dial in time to swerve and narrowly avoid a black bundle stretching from the right shoulder into his lane. The farmer slows a bit to check his rearview mirror. Squinting, he sees the bundle is not a bundle at all, but the too-skinny mongrel with mud and paint in her fur. The farmer swears and pulls the truck over to the shoulder, throws it in reverse, and carefully closes half the distance to the dog. He clicks his hazards on and keeps the engine running.

Let’s see what this is all about before we go digging any graves, he thinks. Maybe she’s just being lazy.

He climbs out of the cab and slowly approaches the dog.

“Hey there,” he says gently. “Hey, what happened to you? What kind of trouble did you get into?”

The pup is shivering and struggles up onto her elbows, whining. Her tail gives a weak thump on the asphalt, and the farmer kneels a foot or so away, regarding the damage to her hindquarters. There is a deep cut across her left haunch and the flesh is torn back. Dust and gravel glisten in her blood. Her right leg is curled under her, so he can’t see much of it, but the left leg is very likely broken. He inches closer to her, cooing to her and letting her sniff his outstretched left hand.

“You’re a good girl, aren’t you? You rememember me. I know you do. I’m that mean ol’ man who tossed rocks at you.”

She nuzzles his left hand and the tail gives another weak thump. He keeps his left hand on her head, scratching her ears and under her chin as he carefully runs his right hand down the length of her body, checking for lumps, swelling, anything that indicates how badly she’s hurt.

“What happened?” he murmurs gently to her. “Did you get hit by that ol’ blue car? Were they drivin’ too fast? You’re a good girl.”

His right hand skirts the open wound and continues gently down the curve of her leg toward the knee. The dog whines sharply, swinging her head over to his right hand, sticking her nose in his palm. She licks the hand and whines, a puddle of urine spreading beneath her.

He rests back on his heels, gently rubbing her ears and neck.

Ah, golldamm it. I can’t leave her out here, he thinks. Likely that hip’s broke, or at least the leg. If I leave her, she’ll just lay there until she gets hit by some other son of a bitch. He looks at the back of his truck, flashers blinking, keeping time like a metronome, counting off the moments he’s wasting trying to make up his mind, disrupting his schedule. She thumps her tail hard on the asphalt again and whimpers back deep in her throat.

“Well, shit,” he says. “Fine. I can take you to Doc Owens’s place.” She tries to lift her leg to clean herself, more little whimpers escaping like a leaky balloon. “I’ll take you to Doc’s, and he’ll get you fixed up. It’s on my way. Won’t take but ten minutes to drop you off.”

As he stands up and starts to the truck, the dog offers a plaintive bark. The farmer pulls an old tarp out from behind the seat and stretches it across the passenger side. He walks back to the dog and around her other side so that her legs are pointing away from him. He kneels again as he pulls his handkerchief from a pocket. He folds it into a narrow band and lets her smell it.

“You’re not going to like this much, but I don’t want you to bite me when I go to pick you up.” He carefully wraps the bandana around her snout, tying a soft knot. She shakes her head from side to side weakly and tries to knock the cloth off with a front paw.

“I know. I told you. Here’s the tricky part. Let’s see if I can do this without hurtin’ you too badly.”

The farmer quickly rolls her forward with his left hand and slides his right arm under her top half. Then he lifts her a bit to do the same with his left arm, being very careful not to disturb the broken leg.

“One, two, three.” He carefully lifts her up, trying to balance her weight evenly. She yips once, swinging her head around toward his face. “Don’t you bite me,” he says quietly, but she works her tongue out a bit to give him a little lick on the neck instead.

He angles her into the cab of the truck and onto the tarp, and she thumps her tail on the seat, trying to shift into a comfortable position, her nose sniffing crazily. He shuts her in and climbs into the driver’s side.

“You’re a real good girl, aren’t you? I know this truck doesn’t smell like home to you, but I’m not convinced you even have one. I’m guessing you won’t complain much.”

He pulls into the vet’s parking lot ten minutes later with no idea all his plans are about to change.

Set in the American Midwest at the start of the 21st century, a family shattered by heartbreak must decide if pride and fear will outweigh forgiveness and their faith in one another.

From a southern Illinois farming community to St. Louis and Chicago, the farmer will try to honor his wife's dying wish and reconcile with his estranged, adopted children. But is his own grief too great to repair the damage?

A tale about perseverance and the power to move forward through pain, The Farmer’s Story explores how the journey to reconciliation can strengthen each of the ties that bind us.

Kathryn Simpson was born in Cincinnatti, Ohio, in 1972. She has spent most of her life in Missouri, where she worked in a print shop and an ice cream parlor. She's been a television videographer, a newspaper reporter, and, of course, a waitress.

The Farmer's Story is her first novel.
Her second novel is complete and she hopes to publish by mid-2015.