A Practical Guide to Help Everyone Cope with Change 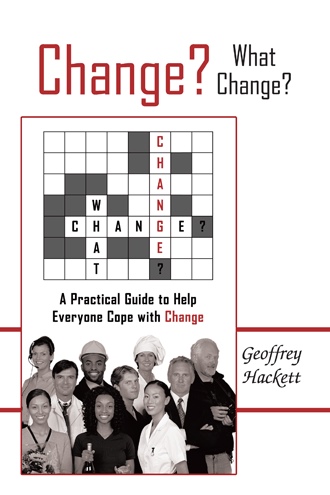 Change what change by Geoffrey Hackett It’s rather strange, isn’t it, that humanity, otherwise naturally inquisitive, tends not to welcome change and can even fear it to the point of paranoia, though often, when forced, it will find a change of great benefit. Even stranger is why the fear of change develops in the first place. There are theories that we don’t like change because we are lazy or we do not have the skill, or because we are creatures of habit, are afraid, or because we are simply control freaks. Actually, I think it is less sinister and more basic. It is about comfort and peace of mind. There are four types of event that affect our lives and thus, how we see change. The first type of change is the most radical. It involves the first appearance of anything and I call this fundamental change. For example the invention of the steam engine created a radical and permanent shift in the way we live, as did medical developments like the discovery of penicillin and the invention of the pace maker. This takes us to the second type of change which is the further development of something we already use or have available to us, an improvement on what already exists. I call this analytical change; somebody analyses what exists and improves it. The third type of change is transient change, so-called as they lead on to other things. This includes political changes brought about by law makers, warmongers and those ‘who know what’s good for us’ as well as natural events. All these may have an enormous impact on our lives for a period of time. The fourth type of change I call enlightenment change and it is tricky to manage or to cope with. No physical change happens at all, only a change in the way an individual or group sees something. This is an awesome change to the individual or group who experiences it but it is of little or no consequence to the rest of us who either pass it off as some aberration or ignorance in those undergoing the change. Listing the four types of change: Fundamental Analytical Transient Enlightenment gives us a mnemonic to remember them by – FATE - and that is sometimes how we accept change in our lives, as fate, the inevitable, the prediction, that we will have to live with this or you will have to live with that. It is all fate. But when change occurs, as we will see later in the book you have choice, and that means the opportunity to do something about it rather than accept it as fate. Meanwhile, let’s take a closer look at these four categories, see how they fit together and how we can recognise them. On the face of it, fundamental change may seem to be the most radical and daunting type of change, usually met with all sorts of questioning. For example, when trains first carried passengers the ladies need smelling salts to prevent them fainting because the speed, about 16 miles an hour. When cars were developed, law makers insisted a man with a red flag had to walk in front of them to prevent them injuring any one; now we slow them down by putting them on the M25. When Christiaan Barnard carried out the first heart transplant, various groups accused him of interfering with the natural order, etc. Likewise, the computer has, since its invention, been accused of everything from taking all our jobs away, rendering us unhealthy, damaging our eyesight and making our brains redundant. In fact, it is these major changes which are the most predictable, the most manageable and ultimately the least disruptive to us. Fundamental changes often take a long time to develop, are often written about years in advance, experimented with, forgotten, rediscovered and then, finally, a very poor performing prototype is produced and tested. Then development starts with a useable model before the marketable version arrives. You should therefore not be surprised by fundamental change.

I am always surprised by the number of knowledgeable and dynamic people who when they earnestly desire that things should be different throw themselves enthusiastically and with renewed vigor into doing more of the things they’ve done before. When you get down to talking with them this is nearly always based on the fact that they are so fearful of the uncertainties of change that rather than plan or learn to manage change, which commonsense would dictate to be the solution to their needs, they would far rather endure even more of that which they are seeking to alter.

—Why the fear? Often because people will not communicate or share their ideas in case they are dismissed.

I am always impressed that the majority of significant changes, and especially those that have endured the test of time, did not explode onto the scene, were not monumental events, were not the creations of super-humans, but the ideas of normal everyday thinkers and creators, ordinary people who wanted to influence change, whose concepts took years to come to light and often lifetimes to be recognized or used to their full potential.

Geoffrey Hackett is a film director and television producer, who started with over twenty years’ experience in commercial management before changing to a career of twenty-three years in learning support through script-to-screen creative communication. He has written, directed and produced over 400 management development training programmes, of which some 250 were broadcast by the BBC. During the creation of these he has worked with leading academics, industrialists, politicians and entrepreneurs, from whom he has distilled vast pools of knowledge into meaningful and considered, adaptable guides to success, especially in the areas of team-building, communication skills, performance management, leadership and change management for all. Geoffrey is an engaging speaker opening new insights into both managing change and effective communication on any media or in any organisation. Geoffrey also delivers film day experience for team development and a fun charity event for CSR conscious companies or groups that is so win win – it’s a life changing experience for all who participate and benefit. He also gives charity talks on building sustainable echo homes for orphans and the victims of disaster world wide. Geoffrey also works in the community with several preservation health and children’s charities and as a school governor For more information or to make a comment, visit www.change-what-change.com