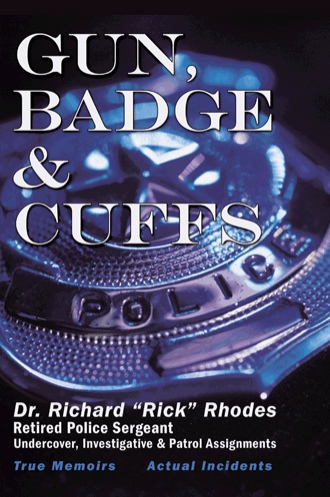 Sergeant Rhodes describes his two face -to -face head-on GUNFIGHTS, one with a store owner the other with an Ordained Minister whom he shot four times.


Two car crashes, one in which the doctor found alcohol and a trace of drugs in his system.

A boa constrictor is retrieved from beneath the bed of a transvestite/entertainer while executing a search warrant for pornographic materials.


Being pulled from a third story window while attempting to save a life.


As manager and bodyguard to the late Redd Foxx he describes some of his experiences.

The experience of a young Black police recruit while in the academy was assigned to undercover vice assignments on weekends. He is taken back by its challenges, exciting and adventurous to say the least. Graduating from the academy he is permanently assigned to the Vice Squad. He describes in vivid detail his experiences in various assignments during his thirty year career from vice to uniform patrol, detective and patrol supervisor. His incidents include two face-to-face gun fights, car crashes, being drugged, and pulled from a three story building, confrontation with a boa constrictor, the riots and many others. His body guarding and managing experiences with the late Redd Foxx, his experiences in show business, etc. The book is exciting, real and most of all, TRUE. Described by one critic as a "Real Page Turner!"

Dr. Rick Rhodes is an army veteran. He served the Cincinnati Police Division for thirty years. His assignments were Undercover Vice Officer, Detective and Patrol Supervisor (retired). He founded The Sentinels Police Association, a Black police organization in the city of Cincinnati, Ohio. He received the city's highest award, that of bravery and valor. Dr. Rhodes was a professor at the University of Cincinnati for more than twenty years, College of Education and Humanities - Criminal Justice (retired). Manager and Body guard to the late Redd Foxx. Eventually he became founder and CEO of his own security company, Amalgamated Security Services, Inc.

It was not my intention or desire to become a soldier, police officer or professor, it just happened. In the first two instances I was looking for a job, the third was a surprise and just fell into my lap. I became proud and dedicated myself to each. Outside influences and my personal situation persuaded me not to re-enlist in the army. It later turned out to be the correct decision, thus my career path began. Now because of my wife Gwen's nagging, encouragement and persistence, I have become an author. Hopefully a successful one.


Among his adventures were sky diving, professional scuba diving and international travels. His short lived sky diving adventures ended after a chute malfunction in a high wind. It resigned him to being a "land lover."