A Struggle for Peace in a Zone Of War 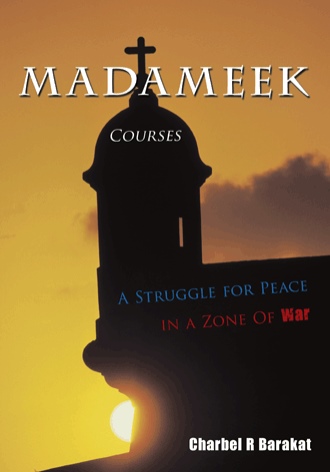 Madameek With great interest I read the Arabic version of "Madameek'" by Colonel Charbel Barakat in 2000 and was overwhelmed by the depth and richness of the information it contained about the Middle East, a region that was and remains a puzzle for many western researchers, politicians, academics and think tanks. Based on his extensive first hand experience, the author has genuinely portrayed the dire hardships of his people, the Southern Lebanese citizens, who despite their anguish, sacrifices and losses remained tall as the cedars of their country and held dearly to their land, identity, faith and history. They never gave up the hope and dream of freedom, democracy and peace. Reading "Madameek" would be extremely informative to all those interested in the Middle East's deeply rooted history of wars, conflicts, terrorism, and diverse cultures. This book approaches and addresses all these subjects in a way that has not been done before. Elias Bejjani Canadian-Lebanese Human Rights activist, journalist and political commentator Publisher & editor for the LCCC & CLHRFWebsites http://www.10452lccc.com & http://www.clhrf.com Owner & editor of the Phoenician News line in Canada The building blocks of a nation I have read Charbel Barakat's powerful story Madameek in its original version in Arabic. It is a narrative expressing lived moments and historical stages by a brave population in the most dangerous places on the Planet. Barakat, a retired officer, a historian and a prolific writer, acts as a witness on behalf of a community thrown into the arena of violence and freedom deprivation. The story of the villages and towns of the southern border of Lebanon , of their ordinary people of those who suffered from terror and suppression, was still hidden under the rubbles of the exodus that dispersed thousands of them around the world. Barakat's book reassemble these building-blocks and make the case for them, particularly the suppression of their cause and their rights as citizens of a nation, bleeding and aching still. It is a must read for those who seek the truth, behind the smallest stone.. Walid Phares, writer and scholar in Global Conflicts, Washington DC

This is an English translation of a book which was written in Arabic and published in Lebanon in 1999.

It is about the struggles, sufferings and hopes of the people of South Lebanon during the period 1976 to 1986. The author outlines the troubles the people of this area lived through. He discusses causes and effects of cooperation between Lebanese and their Israeli neighbours. He takes us on a journey from East Beirut to the Jezzin area of Mount Lebanon as it would have been undertaken during the years 1984 to 1990. The narrative starts at the Port of Beirut and follows the sea route to Nakoura in South Lebanon. It then proceeds across the mainland through various villages and towns, covering the geographic and historic diversity of the population and the problems they faced.

This is a story of a society living in a part of the Holy Land, the land of the “Good News”. It outlines a continuous struggle to survive, a search for a long-lasting peace and a background worth considering in a Middle East filled with hatred.

We can, by reading between the lines, understand how terrorism developed in this area and later expanded to the whole world. Some of the questions and concerns the author raised in 1999 were answered at the Twin Towers, the chaos in Paris, the attacks in the U.K. and Spain and, unfortunately, on and on.

Charbel Barakat is a retired Colonel in the Lebanese Army.

He was born in South Lebanon in a house which had witnessed three successive generations of Village leaders (Moukhtars).

He lived in the area for 40 years and therefore knows about the people and their problems and ambitions.

He graduated from the Lebanese Military Academy with a Masters in War and Military Science and obtained a Bachelor of Political Science degree from the University of Beirut.

He is particularly interested in History and Civilizations and has written many articles on these subjects.

Col. Barakat (Ret) has been invited twice to testify before the U.S. Senate Foreign Affairs Committee on the Middle East and South Asia. He writes articles on the Web and for some Arab language newspapers about the Middle East in general and Lebanon and Israel in particular.