Bismi And The Secret of The Kohinoor 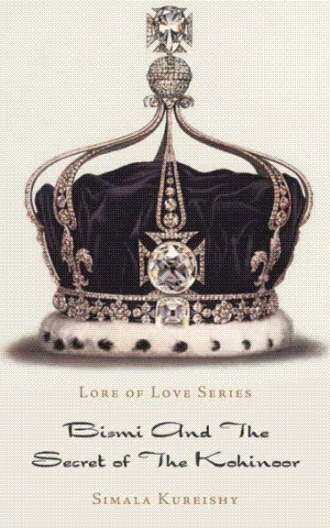 within the whitewashed walls of the tall house close to the forest. She could chirp like the myna, bulbul, and the koyal. She became good friends with the birds, and learned to climb the mango, guava, and pomegranate trees.

Bismi made bracelets and necklaces from the fragrant pink and white flowers of the jhumar vine. She made itar from mogra and chameli flowers. She would then sprinkle this perfume in water to soak Ammi's tired feet.

Bismi accompanied Bhaijan to graze the cows and goats. She trailed along by the edge of the jungle to the luscious green meadows. Sometimes she'd peek inside the jungle.

After one such peek, she decided to enter. In front of her was a badh tree under which a herd of spotted deer known as chital grazed. On the branches of the badh tree sat a large group of gray langurs munching the soft red fruit of the badh tree. Every now and then, a langur would drop some leaves and fruit for the deer to eat. Bismi stood still, as still as she could. She knew that the langur was a mischievous creature best avoided. The deer noticed her, but because she was so still, they were not afraid of her and continued to graze. A fawn who'd eaten her fill of the gooey fruit decided to sniff Bismi. Bismi wanted to reach out and pat the fawn, but she did not. She stayed still. At last, the fawn settled at Bismi's feet and made herself at home. After a while, Bismi got tired of standing still. She began to itch all over. Not wanting to startle the jungle life, she decided to sit down slowly. She lowered herself until she was sitting down beside the fawn. Gradually, she began stroking her. The fawn pressed her wet nose into Bismi's palm. It tickled Bismi, but she swallowed all of her giggles.

The langurs started chattering and leapt from one branch to another and then another until they disappeared deep into the jungle. The deer followed the langur. Slowly, the fawn got up to follow its mother. She took reluctant steps and paused midway to look back at Bismi. Delighted, Bismi smiled and whispered, “I'll come back to see you again, my sweet Hirnee.”

Bismi started spending much of her time under the badh tree. Its stout branches spread out upwards, and its gray bark was rough like the hide of the oldest cow, the one who always trailed the rest of the herd. She liked how the base of the tree formed caves to hide in. The myna birds ate the fruit of the badh tree and passed the seeds. The seeds landed in the cracks and crevices of the branches and started to germinate. These germinating seeds sent down roots toward the ground. Some reached the soil and implanted themselves. With time, these roots aged into thick woody trunks. Some roots were still young and only halfway to the ground. These offered themselves to Bismi. She was convinced that this was the beard of the badh tree, and thus named it the dadhi of the badh tree. Latching onto the dadhi with her uplifted hands, Bismi tried swinging like the langur. The thick canopy of the Badh tree excited her. Bismi exclaimed, “Aha! I can hide here and monsoon can't find me, Bhaijan can't find me, Baba and Ammi can't find me, nobody can find me!” It was indeed a delightful world.

Bismi began to accompany Bahijan when he grazed the cows. Each day, she'd go to the badh tree with treats for Hirnee. She'd share, with her brother, tales about her friend, the Hirnee. Soon, Bismi and Hirnee became inseparable. In the morning, after her chores were done, Bismi would run out calling for Hirnee. An excited Hirnee would gallop out of the jungle and they'd always meet halfway. They spent their days together and returned to their respective Ammis at night time.Their friendship grew and grew until it seemed that they knew what was on one another's minds.

The story is about a spiritual young girl in 18th century India who values friendship and nature above all else, and who, upon finding a priceless treasure, gives it away. The protagonist, Bismi, is young, innocent, and in tune with nature; she is at home in the forest with her animal friends. During one particular forest outing, Bismi is transported on a mystical journey to Uranus, where she picks a large crystal.

Upon her return, Bismi makes her way home through the forest and stumbles into the emperor's hunting party. The unfortunate victim of the emperor's arrow is her friend, the fawn. Distraught and shocked, Bismi realizes that the emperor does not value life, but material gain. She gives the diamond to the emperor. The emperor is greatly affected by his encounter with this fearless young girl. The epilogue tells us that the crystal Bismi found is the strange and unlucky Kohinoor diamond.

Simala Kureishy paints with words, transporting the reader to eighteenth century India and jungles filled with mischievous monkeys, wild deer, singing birds, and exotic fruits. The pages of her book skip, jump, and dance with energy, much like Bismi herself. Reading Kureishy's debut book is like finding an undiscovered jewel.