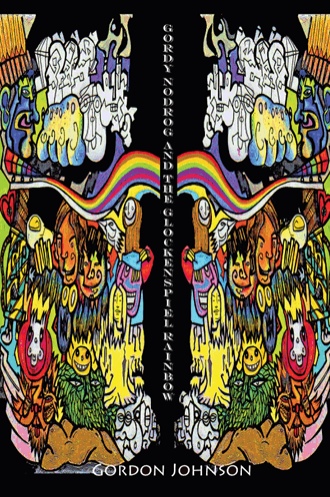 From the hushed stillness Gordy began to stir. As he slowly opened his eyes, he could still hear the ringing in his ears. The entire colour had drained from his face as if he had been riding on the ultimate pleasure park ride a thousand times over. He gazed around trying to focus on his mysterious white surroundings; looking down towards his hands he noticed they seemed to be resting on a mixture of mist, cotton wool and candy floss. The mixture felt wet and spongy, the whole area was all covered in the white fluffy stuff, some of the white mass looked like giant ice creams sitting on invisible cones of air and in the distance was what appeared to be mountains yet they looked like they were made of huge translucent crystal fountains.
He sat there petrified; thinking about where he was and wondered if he was alone. Suddenly he heard a scream close by. It was his little brother.
“Gordy, where are we? Is this Heaven? Will I see grandma?” He cried over to his big brother.
“I don’t know where we are but I am sure it’s not heaven, and no we will not see grandma. Stay where you are and I`ll make my way over to you.” Gordy was trying to reassure his brother but deep down inside he was thinking the same, it could be Heaven and his grandma might appear. If this was true, at least he knew she would embrace them with loving arms.
Gordy stood up very carefully, it felt strange at first as if he were standing on a giant foam carpet and his feet seemed to have disappeared beneath the damp mist, he moved forward trying to reach Paul.
“Stay there, don’t move.” He took his first step, his foot disappeared again under the mist as he felt no solid mass beneath him and it was so light that he thought he was floating on air. He took a second step and it felt the same, the ground beneath him was moving slowly, swirling and floating around his legs. Paul stood up quickly and immediately lost his balance.
“Watch out!”

Gordy Nodrog is the leader of a gang who lives in a small street in 70's England. Gordy and his brother Paul, are swept up into an exciting fantasy adventure with their friends when the weather takes a turn for the worse.
They find themselves in the Cloud Kingdom and meet a variety of new characters who enlist the gangs help to save the special land and the Earth from the evil Nimbus.
Will they solve the puzzles put before them and will the glockenspiel rainbow save the day?

This is G K Johnson's first childrens book. He is a self taught artist who has sold his work across the globe using the name "Kebz". He is also a fully trained florist and theatrical make up artist. He has for a number of years wanted to write a childrens novel and has used his past childhood memories as a basis for this story. He hopes that it is enjoyed by children around the world. G K Johnson lives in Gateshead in the North East of England with his wife Glynnes and he has four grown up children. He is a grandfather of one and has two more on the way. Cover Design: Philip M Johnson