Priests in the Attic

by Elaine A. Small 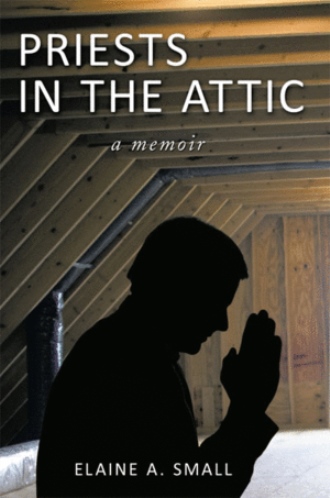 Recalling the telephone conversations with my mother, expressing my hopefulness to her when I first lived alone in New York, brings back dark moments that led me to some hard truths about the world I was engaged in--show business in another country, so far away from home. Slowly, insidiously, the heady excitement of being in that first summer wore off to be replaced by loneliness and high-wired nervousness that extended into nightmares, echoing self-doubt over my musical career, my motherhood, and soon a fear of life itself. Every morning, despite 's chronic heat wave, I'd wake up shivering, staring at the nicotine-stained ceiling, unable to move while waiting for the first wave of anxiety to finish its slide across my belly. Not ready to face the day upright, I would roll over, sink to my knees alongside the bed and start praying--head down, hands crumpled under my chin as when I was a little girl with Mama teaching me the prayer words in Ukrainian, those same words coming back to me in between sobs. Finally, gaining temporary courage, I'd get ready to face the day.

First, I would run the tap to help shoo the silver bristletails down the drain before stepping into the stained tub, its shower spraying tepid water, rusty then clear, in the way of all pipes not retrofitted with copper. After a cold uncomfortable shower, I'd wait for the small tea kettle to boil while holding bread over the other burner with a fork--the way Dido taught me years ago before we owned a toaster. All I ever ate for breakfast was tea and toast, and this morning, as a treat, I used up the last of my strawberry jam, hoping for a little sugar lift. By now I was quite thin, skimping on lunches to save money for that rainy day hiding around every corner--hopefully not today, I thought.

Finally ready, in my lightest summer suit, I'd step out into the blazing midday heat and a deluge of standard sounds and smells: horns blowing, dogs barking, kids screaming, while ethnic restaurants with open doors released pungent odors of lunchtime offerings to jar the senses and start the juices flowing. While I was striving to cross the busy street, wind currents would propel cigarette wrappers against my legs and trifle ominously with my new hairdo, teased high in the beehive style of the day, as soot-laden drafts smudged my careful makeup.

It's all too much, I thought. I can't stand this constant wind ... it's the tall buildings that do it. They create wind tunnels and all the sooty street stuff blows around. Now, here I am, half a morning getting dressed, my face already smeared, my hair looking messy and still so far from that manager's office. Never mind ... get a cab, you'll be late!

“Taxi” I shouted, optimistically holding my music high while anxiously checking my hair and makeup in a store window's reflection. Squinting through contacts lenses now burning with soot, I wonder why I should find all of this so hard. I try to relax in the cab, but I find I’m unable to shut out the clicking sound of the meter that resolutely carries on even at a dead stop while snarled in noonday traffic. Finally arriving at the manager's building, after paying the cabbie what was probably a fair price but felt exorbitant to me, I struggle against the lunchtime crowd while searching for the elevator. By now, exhausted from nerves and frustration, I'm ready to turn back.

Something's wrong, I think. I'm scared, nervous and annoyed--but why ... at whom? Ready to answer as usual, my critical voice, Sinc, jumps in. I'd finally named my inner critic/censor “Sinc” in keeping with his synchronicity and propensity for being painfully honest and succinct whenever he shows up--like now.

Smarten up, lady; this is your dream, remember? Representation by a manager in --someone who likes you, respects you, does not hit on you and gets you some great singing dates. This is what you want--go!

“No, my dear,” coos the manager. “You don't have to sing for me. I've received your pictures from Maurice Seymour here in , and they're great. It doesn't really matter about the voice; I've seen your write-ups in the Canadian Variety, and I'm sure we'll be able to work together. I have a club in mind, not far from here, and if you agree, I'll take you there to check it out, and see how you like it. What about tomorrow night. Are you free?”

All of this took place with me facing him seated at a huge leather-inlaid desk. Wearing a grey silk shirt and dark glasses, pitched high on his balding hairline, the manager smiled to himself, while sifting through

"Little Elaine Sawchuk, a minister's daughter who grew up in the north end of Winnipeg with a need for attention and a love for singing, could see only the magic in show business. She pursued it after becoming an X-ray technician, she pursued it after becoming a wife and a mother, but as Elaine Steele, one of the best supper club singers in Canada, ... she had to pay a high price for the little bit of glamour and those moments of applause…”

Priests in the Attic

, cast in Toronto during the tumultuous `60s through late`70s is a confessional story of lost faith, redemption and hope. This memoir is written through the power of reverie, a unique concept of the French philosopher Gaston Bachelard--the driving force behind this work. In The Poetics of Reverie, Bachelard describes his use of reverie to unearth emotional truth.

All of us possess our own emotional truth and thus, each of us has a unique story to tell--but who am I, that anyone should be interested in my story? Let my book tell you:

Sawchuk, was born and raised in Winnipeg, Canada. At age twenty she left home to pursue her dreams and has since resided within the Toronto area. After careers including that of an X-ray technician, a professional singer, a European fashion buyer, a real estate agent/investor and a B&B operator of Tara Hall in Wellington, Ontario, not for gain, Elaine returned to York University to follow her life-long interest in writing. Elaine continues to write daily at her home in Belleville, Ontario, not for gain but for the love of words and their creative silence.