How to Be a Great Teacher 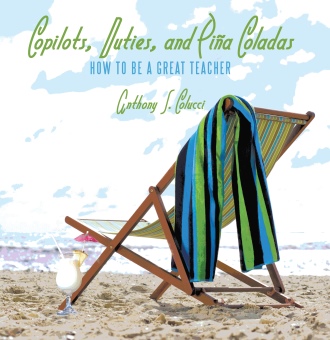 As a child, I was probably considered a handful, a thorn in a teacher's side. Okay. Let me just say it. At times, I was probably a royal pain in the gluteus maximus. I was a very good student. I also was talkative, disrespectful, and rude. In 1st grade, I spit on a teacher; in 5th grade I said F.U. to a teacher; and, as a junior in high school, I took a play right out the cult classic “Fast Times at Ridgemont High” and called a teacher a d-ck. Wow! What an awful child I was. I guess I deserved it when, in first grade, my teacher embarrassed me so badly that it still haunts me today. She marched me into the other 1st grade class to show the teacher that I had put my sweatshirt on inside out and said, “Look at him. He can't even put his sweatshirt on. How am I going to pass him?” Yeah, that still stings. In 5th grade, I remember the same rush of embarrassment. My music teacher, who, by the way, was so obese she sat on two student desks - one for each cheek, scolded me in front of the whole class, saying in a mocking voice, “ I don't care that your mother came in here and said you don't like to sing because your father doesn't sing in church.” Another phrase some teachers must have learned in their teacher training programs that was launched on me on a few occasions was, “You're going to end up DEAD OR IN JAIL.”

Teachers, are you looking for another research-based textbook that was written by some scholar who works far from a real classroom?  If that’s what you’re yearning for, put this book down and keep looking.  Copilots, Duties, and Piña Coladas is a one of a kind, witty, and practical book about how to be a great teacher. As you read it, you’ll find yourself laughing, crying and perhaps doing both at the same time. Anthony S. Colucci skillfully weaves "tongue in cheek" humor with his experiences as a troubled student and a passionate teacher to motivate, invigorate and rejuvenate teachers!

Anthony S. Colucci is a passionate and dedicated educator. He is a National Board Certified Teacher and has a Masters Degree in Education. His devotion to his students, as well as his innovative and creative lessons, have earned him numerous awards including a Governor's Award from the Florida Council on Economic Education, a Gold Star Unit from the Core Knowledge Foundation, and Cape Canaveral Air Force Association Teacher of the Year. Anthony currently coordinates and teaches the Gifted Student Program at four elementary schools. He resides in Florida with his wife and daughter. You can contact him at anthony.colucci@yahoo.com.