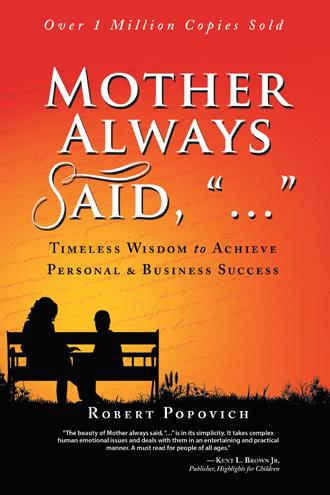 We are born one day with fanfare and kind,

But we too quickly learn—there is so little time.

We are taught life’s lessons from those near and far,

Hoping they serve us well—in search of our star.

We experience the best and worst with nary a warning,

In hopes of more laughter—than despair and mourning.

So with all of this uncertainty what does life truly offer,

It is the choice of For in living with passion, we can be certain of one thing,

We will have tasted life’s grapes—whether sweet or vinegary.

And when our lives have ended, and it is all said and done,

Our degree of passion—will determine our life’s total sum

TO THE MOTHERS OF THE WORLD

MUCH HAS BEEN WRITTEN of your contributions, but most efforts to describe them have failed to capture their essence. From cleanliness to faith, from guidance to education, from adversity to resolution, from hope to reality, and from discipline to love, you have filled every void and softened every fall. With this in mind, we hold on to what has been so dear to us, but at the same time struggle to establish our independence and demonstrate that, your efforts were not in vain.

Your selfless ability to do so much for so many, while denying yourself, is too often rewarded by taking you for granted. Although we celebrate your deeds on a national day of honor, we frequently forget that it is the small acknowledgments of appreciation that you most cherish and desire. Your trust, faith, encouragement and love serve as a constant reminder of what is truly important in life.

To all the mothers of the world from all the children of the world for all you have done and all that is yet to come, we simply want to say, “Thank you.”

IN 1980, I WORKED AS a free-lance marketing consultant in New York City. Fresh out of the relatively secure and predictable corporate world, I eagerly looked forward to an entrepreneurial future that held seemingly limitless potential, but also great uncertainty and intense competition. Even though I had a relatively successful corporate career, which translates into Never having been fired, I was experiencing a classic case of mixed feelings. As a result, it is not difficult to understand my sense of urgency in wanting to move forward as quickly as possible to avoid any second thoughts about a decision that at the time was irreversible. During my second week of independence, I was having lunch with an old client and friend who presented me with my first window of opportunity.

He had many contacts in private industry, as well as high-level governmental contacts in Europe. He asked if I would be interested in speaking at a business conference in West Germany. Without hesitation, I accepted. He went on to say that the original speaker canceled, and the conference coordinator was desperate.

I tried to ignore the implication that they would take anyone at this point, and turned my attention to asking obvious questions. Who was the audience and what were their expectations? What topic should I cover and for how long? Each question was met with either a shrug of the shoulders, or the same response—he had no idea. The only information he had in his possession was the name of the conference leader, the city, the date, and where I would be staying. All other details would be provided upon my arrival. He tried to reassure me that all would go well. He almost forgot to mention one minor detail—my flight was later that evening.

Under normal circumstances, I might have been more concerned about the topic and audience, but with little time to spare, those details would have to wait. I rushed to my apartment and packed only the essentials—my passport, a change of clothes, toothbrush and a Berlitz German phrase book.

As I traveled to the airport and boarded my flight to Frankfurt, my mind was racing. All I could think about was the incredible opportunity I had been handed. However, I had forgotten one of Mother’s more profound and critical pearls of wisdom: Nothing is ever as good as it seems, or as bad as it seems.

Jetlagged but excited, I walked through one of those endless international arrival corridors, cleared customs and was on my way out of the airport, when I spotted a sign bearing my name in the hands of a man dressed in a chauffeur’s uniform.

He looked about as nervous as I felt as he led me towards the waiting Mercedes Benz limousine courtesy car. It was plush inside and well appointed with all the luxuries—a telephone, a bar, a writing desk and all sorts of other hidden amenities; putting my new powder-blue Super Beetle Volkswagen to shame.

How long will it take to reach the conference center?” I asked the driver as we pulled onto the Autobahn.

“One hour,” he stated, smugly adding in his thick German accent, “I believe that would be perhaps two hours in the United States? Ja?” Moments later, we were cruising in excess of 100 miles per hour, and I suddenly understood what he meant. The countryside was a beautiful blur.

As we pulled into the conference center driveway, I noticed a stately looking man anxiously pacing the area near the driveway. Intense relief filled his face when he saw me seated in the back seat. Even before we came to a complete stop, he grabbed the door handle, pulled the door open, reached in as if to shake my hand, and pulled me out of the car. “Thank goodness you’re here!” he said, grinning a bit manically. “You go on in ten minutes.” “Who is the audience and what are their expectations?” I asked, gulping the air a bit too quickly as the fear caught in my throat.

High-level executives to first-line supervisors from ten European nations,” was his answer. Further questioning uncovered the awful truth: the audience was sorely disappointed that the original speaker—a former Noble Prize—fell ill, and an unknown, last-minute substitute would be taking his place. At that point, my pulse was pumping at somewhere near the speed of light, which I assumed to be a precursor to hyperventilation. I knew I was up the proverbial creek without a paddle.

I searched my mind for a psychological life preserver, and the sound of my mother’s voice filled my head. She said, “Robert, run to the problem, not away from it. It can be a great opportunity if you know how to take advantage of it.” A feeling of calm and certainty replaced my high-anxiety and self-doubt

Mother always said, “Robert . . . don’t forget what your last name is; you represent all of us, not just yourself.”

EVERY MORNING WHEN I LEFT for school or went out to play, Mother would holler before I was out of earshot, “Don’t forget what your last name is; you represent all of us, not just yourself!” Certainly, such messages were to some extent were intended to warn me to “behave.” In a staunchly religious Eastern Orthodox family, respect and good behavior topped the list of life’s rules, and breaking those rules were considered a relative capital offense, which meant severe verbal admonitions that bordered on inquisitions. No matter how harsh the words, however, they were delivered in a lesson format that required behavioral modifications if privileges were to be restored.

Mother always said, “…” is a compendium of the author’s mother’s most treasured maxims and memorable childhood value lessons he learned while growing up and has applied in numerous and unique situations in his successful business career. The journey begins in a small quiet town in western Pennsylvania, passes through the bright lights of Broadway, unwittingly into the middle of the Iranian Revolution, then living and working within a breath of the Berlin Wall; and finally, the unending challenges he faced in the early years of the former Soviet Union. Each encounter tests his faith and reliance upon his mother’s wisdom to see him through. He has taken the best of his anecdotes and put them into an indispensable collection for all ages to enjoy and successfully apply in their everyday lives and business careers. His narrative style will tickle your funny bone and possibly draw an occasional tear. Critics have labeled his writing as “…unique, refreshing, practical and riddled with original humor.” While the author’s childhood experiences cover some of the most relatable and entertaining moments in a child’s life, they also provide a foundation for teaching many important value lessons to children. The adult experiences provide the framework for addressing life’s daily challenges in personal relationships and a variety of business situations. You can be effortlessly apply these principles and immediately measure their value in your life. The result is a fascinating literary effort that will appeal to young and old, professional men and women, and the general public. Mother always said, “…” can be absorbed in one reading or a chapter at a time. It is a book that is certain to become a permanent reference for every library, business and family.

Robert Popovich is a noted international business and governmental consultant, award-winning speaker, speechwriter and poet. His assignments range from Fortune 500 companies to the White House. He has lived and worked in major capitals throughout the world and his experiences are as intriguing as they are diverse. Due to the book's overwhelming success, he is nearing completion of Volumes II & III and more exciting adventures of growing up with mother and how these lessons can provide a foundation of success for in our personal and business lives.