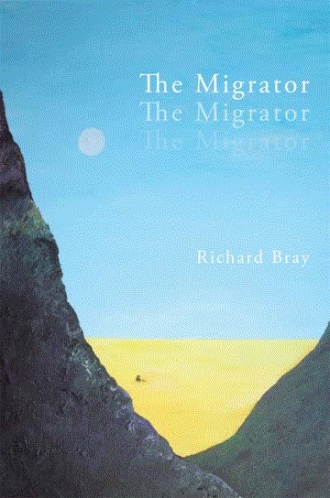 Alentir had not yet started school when Elexdreur and her father moved to the , a poor and remote collection of houses caught between two ridges, east and west, beyond which lay two large stretches of water.

To the east flowed the Seranid, or , the major waterway of the kingdom; even though it rose far to the north it did not freeze even in the bitterest winters. The lands through which it flowed at first were high and uninhabited, with nothing growing to any great height due to the harsh winds, yet they were rich with sedges and horizontal willows and alders growing besides the water. In spring the high plains about were strewn with the red and yellow of poppies, mountain avens, and willowherbs. From those heights the river plunged over an overhanging ledge and descended as a glittering curtain towards the central portion of the wide realm of Suhmerfin: the immortal God-King.

To the west lay the , after which the province in which Hinauïk was situated was named. Long ago it had been on the course of the , but the river had been diverted and a large loop cut off. Yedal-lin now had no outflow and only unreliable inflows. The waters had become bitter. The villagers obtained whatever they needed – water and fish, usually pike or trout – from the nearby river. Their land did not give a good return, but with what they caught in the river they were able to scratch a living.

All the houses in Hinauïk were similar: they all had only one storey, all were built around a courtyard, and all save the most important one, the mayoral one, were made of wood and mud. They had originally been painted white, with the red of shutters and eaves here and there, yet it was long since any of the lesser houses had tasted paint.

Alentir was a young child playing in the dirt outside the doorway of his parents’ house when he saw a procession came up the village’s only street, heading for the mayoral house. It was not large. There was a cart loaded with official-looking boxes and various pieces of domestic furniture. In front of this rode a fat man on a spherical and tuft-covered horse. He was richly arrayed, at least to Alentir’s eyes, in the purple robes of a Prefect. Behind the cart came a litter with closed curtains, but Alentir could see a small face poking out from between their folds. It was a pretty face, with freckles across the upper cheeks and slightly snubbed nose, and was framed by mousy brown hair formally cut.

When Alentir looked back on that first sighting it was as though the memory had always remained vivid, and that the feelings stirred by the young girl’s face, especially the allure of her eyes, had appeared as fully formed as his youth could understand. Yet maybe he imbued the event with an intensity that, as the years passed, he wished it to have had.

Although Elexdreur was a few years older than Alentir, he started his education before her. The upbringing of boys and girls was very different – as was their perceived path in life – and they were not considered to need to know the same things.

There is order and there is chaos. One good: one not. This is an absolute, instilled in everyone. Straightforward.

And initially, in a remote village, in a realm heavy and old where Alentir grows up, that seems so. Till Elexdreur: till he gets caught in an internal world that increasingly diverges from unwanted external events.

After a period of incarceration he leaves his homeland to traverse Kolchin – its forests, waters and passes – till he reaches the lands beneath the high peaks. There he finds a knowledge long-distilled and a corruption newly arrived.

Richard Bray is in his early forties and lives in Worcestershire. He is a keen student of history and loves gardening.

Like Alentir, he enjoys painting and a drink. He has suffered from long-term depression since his early twenties, and his attempts to accept and understand this have influenced his exploring of Kolchin.

This invented world is much deeper than shown in The Migrator, for all Alentir travels a good portion of the heartland of its main continent: the fastland. To start further exploration, visit www.richardbray.com.

The Migrator is Richard's first novel to be published.