The Sagas of Dxaan Lere 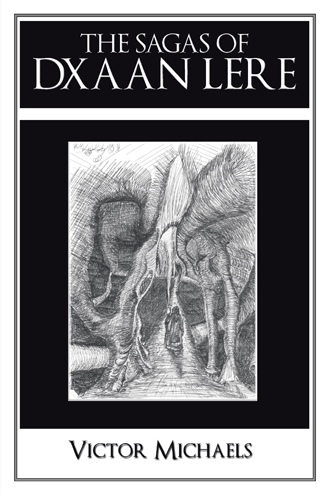 “Blankets! Bring blankets, now!” She commanded trying to warm his body with hers.

This is not an ordinary cold that makes him tremble, she thought as Oaran lay in her arms fighting the images that filled his unconscious mind.

Oaran watched through the small crack in the castle wall. There within he could see a figure bound and gagged to a post with chains. His parched throat prevented him from calling out to the imprisoned figure. Even though he did not want to be discovered, he felt compelled to help.

Can it be Cusapal, he thought as he tried to get a better view.

On the far side, he could see a silhouette of someone or something just beyond the glow of the single torch illuminating the center of the room where the chained figure stood. His vision blurred from his weakened state. It seemed that the two within were speaking to one another. His thoughts drifted back to the forest and Sicajes. He needed to inform the valley of what he had found.

Maneuvering to get a better view his footing gave way dislodging some stones. The chained figure looking in the direction of the sound gave Oaran a better view. It was Cusapal and the silhouette had vanished. He was about to motion to Cusapal when he felt a foreboding coldness come over him. He turned to see the strange silhouette floating behind him. Startled he lost his footing and plummeted down into the darkness of the ravine below him. He must have fallen for an eternity before he crashed into the murky waters that saved his life but left him unconscious.

Back inside the castle, the two figures spoke as Oaran floated away.

“You will never win," Cusapal shouted. “My father and the others will find me and destroy you.”

“Your would be savior has fallen to his death and no one will come…Ever,” boasted the silhouette. “You will remain here the rest of your days chained in the dark never to look upon daylight again.”

The silhouette vanished as Cusapal looked to the crack in the castle wall. “Please be safe whoever you were,” he prayed watching as the thorny vine that covered most of Castle E’drosh filled the crack slowly removing his last connection to the outside world.

He looked up to the heavens, closed his eyes, and prayed further, “I summon upon the mystic powers of the twelve stones to give me strength.” He thought of his father and sister and begged for their forgiveness. He had been impatient and careless. Who or what was his captor? He knew his actions would bring sorrow to his family. Cusapal dropped his head in defeat as laughter from the ominous silhouette echoed throughout the castle.

Oaran found himself waking from his ordeal just to be struck by a branch or rock as he was tossed and beaten by the torrid rapids of the underground river. How long had he floated and where had he come to as he dragged his naked body from the frigid waters. There in the distance he could see light. Warmth, he thought as he stumbled and crawled his way out of the cavern. Reaching the mouth of the cavern, he pulled himself up, leaned upon the stone wall of his temporary shelter and looked out onto the unfamiliar landscape. Thinking as he stood for a moment, how am I to get word back to the others. Looking back, he thought of Cusapal and the evil behind him. The dark coldness he felt at E’drosh returned. Falling to his knees, the impact shot pain through his body. Holding his head, he slowly rolled over on his side, sobbed then fell unconscious.

Oaran began to stir as Sicajes held him in her arms. She placed the blankets around him holding him close. She had never experienced terror as when Oaran finally open his eyes and looked back through her eyes deep into her soul. It was but for an instant, yet the coldness that ran through her came from a dark and soulless place. She knew then that Cusapal was lost and wept.

Oaran and Sicajes joined a desert caravan lead by T’liquii. During the journey, Dxaan their son is born. Growing up in Venthele, curiosity leads him to the market place where he meets N’tres, member of Lord Zorid’s and a Dragon Keeper. After learning from N’tres of the library beneath Dragon Keep and the secrets held there, Dxaan unknowingly finds himself coerced in taking the first steps onto a path he was destined to walk.

Returning to Ipils Caltren where Elogan, his maternal grandfather is gravely ill past enemies intercede and Dxaan’s life is changed forever. Estranged and alone he ventures out in search for his mother. Silvermane his mother’s kinsman stumbles upon him at the edge of the frozen lake. It is here that Dxaan acquires his staff, Es’lonn. Together they encounter the benevolent mammoth-like Drethuns.

Assisted by the Drethuns with their heightened senses and telepathy, they journey to Ice Walk, home of the Highlanders. Dxaan remains and after learning of Silvermane’s demise and believing Sicajes to be lost, he returns to Ipils Caltren when Elogan dies. Introduced to Na’an the daughter he never knew, Dxaan joins her and returns to the desert. Caught in the shifting sands of a sinkhole he finds himself wandering through caverns.

Reaching the sea, he is taken by pirates aboard their ship and reunited with N’tres their captain. With a self-imposed exile for atrocities committed years earlier, she aids him in his unrealized quest by taking him to Dragon Keep where he ultimately encounters the Oracle. With renewed faith and the answers, he sought Dxaan sets into motion a series of events filled with greater     danger than those he seeks to destroy. Assisted by past associations and endearing new ones Dxaan must now prove himself…to the world of Lons Gladin…and ultimately…himself.

Victor Michaels was born of Puerto Rican descent in the lower east side of in ‘53. His parents moved around a few more years then moved to the country. Back then, was country. Dirt roads with a few homes surrounded by woodlands inhabited with wildlife. Soon there after “progress” came along and industry killed the magic of the woodlands. He then graduated high school, tried marriage and failed. Eventually he found love and has been so for the last 28 years.

‘Sagas’ came from a story he wrote in college about a handicap boy. Taunted by his peers and the only child of a widowed farmer’s wife, he learns of real loneliness and of life’s true obstacles through his association with a renegade Indian shaman. Michaels enjoyed seeing his imagination on paper. He recalls a professor’s words. “Don’t worry about the grammar.” He chuckles and adds, “Even though it has and is one of my most difficult obstacles. I would have never gotten past the title.”

In 2004, he and his partner moved to a small town south of . He believes it had been known as the tomato capital. “They still have festivals,” he said. Later that year, he was fortunate enough to meet his, ‘muse.’

Michael’s fascination with Sci-Fi and Fantasy started with the films of the 50’s and 60’s and has taken him in the direction you now see before you. To enhance your experience he has placed “Saga” and other information on this website, www.dxaanlere.com.

Personal note from author: Enjoy the journey that is, “The Sagas of Dxaan Lere,” and remember…“You don’t have to dissect something to learn how it ticks. Just listen a little closer for the heartbeat. You can always kill it in the sequel!”