What I Never Told You

A Daughter Traces the Wartime Imprisonment of Her Father 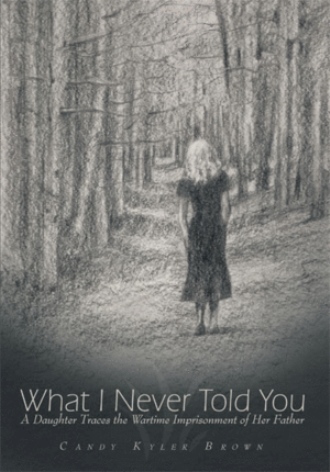 “This was the heaviest artillery that we’d seen so far, and I was terrified as the ball turret took a glancing blow that I immediately radioed to the others.  Thank God it wasn’t full force but I became really excited –– it had scared the hell out of me.

Flying at 25,000 feet, we successfully released our bombs over the target; however, as we turned toward , the terror increased when I felt the plane lurch violently and saw the direct hit that our Fort took from another of those frightful flak bursts.  I immediately radioed that our number two engine had been hit.

I began to sweat in the frigid air.  One of my greatest fears when assuming the ball turret position had been the fact that I could not wear my parachute while in the turret, and that I wouldn’t be able to get out quickly enough to put it on if the necessity arose.  As I was thinking these thoughts again, the pilot called me out of the ball turret. I knew that the situation had to be serious for him to pull me from my position.   I pulled on my ‘chute and watched and waited in the freezing air.”

In What I Never Told You: A Daughter Traces the Wartime Imprisonment of Her Father (published by AuthorHouse), Candy Kyler Brown collects and tells her father’s personal account of being a prisoner of war during World War II. Though Brown’s father, John Kyler, an Army Air Force B-17 ball turret gunner who served during World War II, died without ever setting his experiences in book form, Brown was able to piece together the events of his heroic, terrifying ordeal through the personal journals her father kept during his captivity. “I was in awe,” remembers Brown upon finding the handwritten notebooks. “It took me back in time, and I could imagine so clearly my father as a young boy and picture him, his freedom lost, sketching these pages from his “home” behind barbed wire. I thought of all the boys who were held captive by the German guards and how they must have feared that every day could be their last.” Brown’s father was shot down February 4, 1944 while on a mission to Frankfurt, Germany. As their damaged ship lost altitude over Belgium, he and the other crew members were forced to bail from their crippled bomber. On the ground, he was quickly taken prisoner. John Kyler would remain a prisoner for 15 months. While Brown was aware of her father’s heroic survival, accounts of the ordeal were not easily spoken of by her father. “It never felt comfortable to ask about that time in his life that he had put behind him,” Brown says. “I believe that men like my father – men who had witnessed so many life changing events – felt both lucky and guilty to survive when many of their comrades did not. I remember months before his death I told him he should write a book, and I would be his secretary and help him record his memories. He responded, ‘What’s there to write about?’, and that was it.” Brown’s father would pass away suddenly soon thereafter. With What I Never Told You, Brown has shared not only her father’s story, but also the countless other stories untold by soldiers who are unwilling or unable to speak of their traumatic experiences. An engrossing read, What I Never Told You tells the war stories that go missing from history books. These are personal odes, each page alive with curiosity, fear, panic, frustration and an unbreakable optimism. It’s a read not to be missed.

Candy Kyler Brown, the third eldest of five children, was born and raised in N.Y. and was always close to her father, John R. Kyler, a World War II veteran. She learned very little from her father about his wartime experiences. After his death in 2004, Brown spent the next six years retracing her father’s full wartime history, from his enlistment in N.Y. to his airbase in England. She followed his movements in Belgium, Lithuania, Germany and Poland. With painstaking effort, she compiled her father’s background information and met many of the people who had played a large part in her father’s survival. Additional information can be found on her web site: www.remember-history.com. Brown presently lives in Kill Buck, N.Y. with her husband Bradley, not far from her mother Sara, and her children, Lindsay and Nicholas.