In Search of a Penguin's Egg 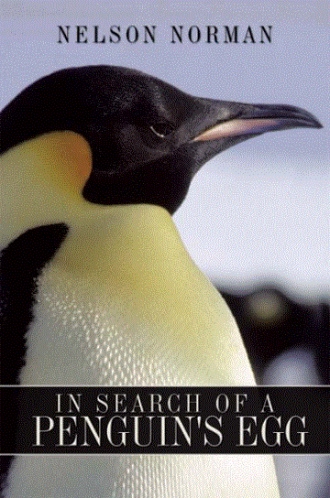 We now had a collection of twenty penguins inside the caboose and although eggs were being laid indiscriminately all around us our bunch in the corral showed not the slightest interest in reproduction. By this time the breeding season was well advanced since our efforts had taken more than two weeks. We decided to give it a bit more time but did not feel great confidence. It had become really cold and the temperature did not rise above minus 40 degrees Centigrade for the whole month of June. Fortunately there were no severe blizzards although there were several minor blows and a lot of drift so that we were only unable to venture forth on two or three occasions.

By this time the rookery had formed itself  into a single massive huddle which remained relatively quiet but did seem to be moving all the time in a shuffling sort of way. This seemed to be a kind of temperature regulation by which the movement allowed them to take turns of exposing themselves to the cold edge. It may of course have been the stronger or more aggressive ones who managed to maintain a place well into the huddle and the weaker and less fortunate ones who kept finding themselves on the edge. On one occasion something caused the huddle to move several yards laterally and I was surprised to find that they were in fact standing in a great pool of water. Thus the huddle must have generated considerable  heat.

The other thing which nagged at the back of my mind was the start point of the timing of the embryos since  we lived on the ice-shelf two hundred feet above the sea ice and may not be there when the egg was laid. This exercised my mind as I wandered around the rookery and I could not think of an answer. One day as I wandered around the huddle pondering the issues  I noticed  a penguin leaving the huddle and standing outside. There seemed to be rhythmic movements of the lower abdomen and I began to wonder whether I was observing a penguin in labour. Some time later out popped the egg which she placed rapidly on her feet and re-entered the huddle. If only I had had a label with me or the penguin had been in the corral. Some time later the performance was repeated and it took  about twenty minutes for the egg to appear. This was much the same as the first episode. It thus seemed that we could see eggs laid if we just observed the huddle closely and we had about twenty minutes to do something about identifying the bird.

This is the preview which is added here since the form refusewd to accept it completely above.

A year living with ten scientists in a hut buried deeply within an ice shelf eight hundred miles from the South Pole is an unusual  experience. Aside from the climatic problems and the care with interpersonal relationships essential in such circumstances the author´s project was even more unusual and challenging.  A few miles from this scientific station there was a rookery of about ten thousand Emperor Penguins. Captain Scott´s friend and biologist Dr Edward Wilson was determined to discover whether these creatures were fish which could fly or birds which could swim like fish – or even reptiles for they were primitive creatures in evolutionary development. Wilson died with Scott on the way back from the South Pole and the scientific puzzle drifted into obscurity. The author, who was on National service fifty years later, and certainly not a professional explorer was asked to provide a timed series of Emperor Penguin embryos at twelve hourly intervals for ten days. Ignorant of what the project entailed he agreed and so started an adventure which coloured the rest of his life. No one told him that the penguins laid their eggs in pitch darkness in the depth of the polar winter, nor that the average temperature would be in the minus forties.  Penguins, like sheep,  are not easy to tell apart so how was he to time an embryo unless he saw the egg laid?  How also was he to pick out the same penguin several days later to harvest the embryo? It was a mission which seemed  close to impossible  but then the challenge had been  handed out to a daft Scotsman with the genes of a Scotch terrier.

Nelson Norman was born in Paisley in 1932 and educated at Paisley Grammar School and Glasgow University. Fifty years ago he  spent a year providing medical cover for a group of ten scientists at the Falkland Islands Dependencies Survey Base at Halley Bay, some eight hundred miles from the South Pole.  During that time he gained first hand experience of  the problems of healthcare of a remote community functioning in hazardous environmental conditions. He measured the cold  exposure of the personnel and found that  man – the tropical animal – used his intelligence to provide a more or less tropical micro climate for himself  by the use of clothing, heating and housing. Although he was awarded the MD of Glasgow University for this work he proceeded to become an academic surgeon in the Universities of Glasgow and Aberdeen before establishing a second career in Remote Healthcare based upon the need to initiate a system of healthcare for the offshore oil industry in the North Sea and later in the Middle East. He founded the Institute of Environmental and Offshore Medicine at Aberdeen University in association with the late Dr Colin Jones of British Petroleum and subsequently the Centre for Offshore Health at the Robert Gordon University, Aberdeen before proceeding to a post in Community Medicine at the UAE University in the United Arab Emirates. He is an Emeritus Professor of Environmental Medicine at Aberdeen University and an Adjunct Professor of Community Medicine at the UAE University in Abu Dhabi and has been a visiting Professor of Surgery at the University of Kinshasa in Zaire and a visiting Professor of Community Medicine at Memorial University, St John´s,  Newfoundland. He is now President of the Institute of Remote Healthcare.