Strategies For Creating Lasting Joy In the Home 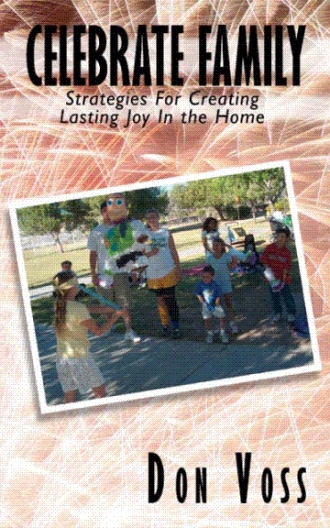 I was surprised to read in the survey responses from the family how many of them said that they grew up thinking that all families celebrated the way we did.  They then discovered in sharing their experiences with friends that we were unique in many of the things we did and the way we did them. Some got ‘raised eyebrows’ responses, but others expressed delight or even envy that they didn’t get to experience the same excitement in their families as we did. Daughter Cathy wrote:

“Mostly, as a child I just knew that we were different from most families.  There was something special about us that other families didn’t have, and I always took a lot of pride in that. Every now and then someone would get a glimpse at one thing or another as they were invited to participate in an event or they visited or we shared some story of what we did, and you caught this look of wonder and maybe even a little bit of envy in their eye.  I knew that not all people had the type of  family experience that we were experiencing.  That realization has only gotten stronger as an adult.  And I still experience that pride as I share stories of the traditions that we celebrated.”

Another of the favorite traditions mentioned in survey responses was our annual Las Posada celebration.  This tradition is patterned on the travel of Joseph and Mary and their search for a place where Mary could give birth.  As tradition has it, because of a census in their land, there “was no room in the inn” as people from all over the region came to be counted.  In the Mexican retelling of this story, the couple stopped at many places and asked if they could stay but were turned down until finally they found cover in a stable.  In our reenactment, our family would go from house to house in our neighborhood carrying candles and singing carols.  At the homes of the four neighbors who had been invited to participate, we knocked on the door, sang a carol, and then asked if they had room for us to stay the night.  The answer at each home was always the same: “I’m sorry. We have no room but we will join you in your search for a place.”  After each neighbor’s home was visited the growing procession returned to our home where one of the older children was left to answer the door.  The response there was “Yes, we have room.  Welcome!” The entourage, now totaling over thirty persons from age two to sixty-two then came into the house, which was prepared for a holiday fiesta. A piñata hung from our vaulted ceiling; the family’s favorite party meal – chalupa (a stew-like meal of pork or beef with chilies, pinto beans, and Mexican spices served over a bed of Fritos) – was ready to be served, and two blenders spewed Margaritas for all adults and punch for the kids.  After the meal everyone from twelve and under was given their shot at breaking the piñata which of course was filled with candies and small trinkets.  It was truly a fiesta! Daughter Joanie wrote:

“Las is the one tradition that we did that amazed me as I look back on it.  How unique it was that we had four different neighbor families willing and excited to participate in reenacting this holy night of Mary and Joseph trying to find shelter for the birth of Jesus.  Chuey (Joanie's Mexican American husband) thinks it is so neat that there were these five Anglo families in Phoenix celebrating this Mexican tradition."

In “Celebrate Family” the author describes in some detail the many rituals and traditions he and his wife developed and practiced in their home while raising their family of ten. While the text loosely follows the liturgical year from Thanksgiving and Advent through Ordinary Time, it does not limit activity to strictly religious or church season themes. Many of their celebrations were secular, and some simply invented to fit only their particular family situation. They enjoyed all the same occasions for celebration that most families do, and inserted many others - just to have another party.

Before beginning this book, Don created a survey that was sent to each child, all of whom are now grown to adulthood and enjoy parenting of their own families. His quest was to hear from them their feelings about how all those activities affected them as children and now as adults and parents. The book includes many of the survey responses from family members.  It is those responses which lighten and brighten the text, and lend this work credibility in providing an outline or syllabus for the reader to follow in designing activities that will bring joy and closeness to their family.

The book describes what can happen in families when celebrations are continued and repeated throughout the family’s life so that there develops a history of traditions and rituals that are uniquely familial, and to which each member can look back to get a clear sense of who and what their family is.

Don Voss admittedly confused his ‘vocation’ with an avid ‘avocation’. He attended in from 1952 to 1955, majoring in a pre-dental curriculum. He then attended the University of Southern California School of Dentistry from where he graduated with a Doctor of Dental Surgery degree in 1959.

Kathryn and he were married in 1957 and embarked on a voyage of more than 42 years of raising their family of ten children, two boys and eight girls, before Parkinson’s disease took Kathryn in 1999 at age 65.

Both were heavily involved in the activities of their Catholic parish from the beginning, from singing in the choir, to lectoring, to teaching high school religion and philosophy classes, to parish council membership. They also participated in Marriage Encounter activities, led married couples’ seminars, and were active in and held office in the Holy Family Retreat Association.

In 1981 Don left his dental practice and he and Kathryn were employed as co-directors of the Catholic Diocese of Phoenix Office of Family Life until 1991. Their responsibilities included developing marriage preparation classes and family enrichment activities. In that role, they became members of the National Association of Catholic Diocesan Family Life Ministers, where they held national offices for several years.