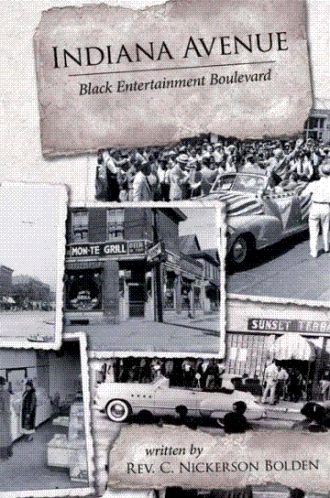 Indiana Avenue was quite the community. It was a legendary place known by most as the street that "started at a pawnshop and ended at a hospital." This community, as it was once known, is dead." The Indiana Avenue community unquestionably should be remembered as the essence of black history in Indianapolis. According to legend, "Sinners dreamed about this place, preachers preached against it."

Historically, Indiana Avenue was the area, which nurtured the black subculture of Indianapolis. Many remembered the rich culture that prevailed along "The Avenue", as a jazz strip where The Ink Spots and Wes Montgomery obtained their beginnings. Most of those memories are in danger of fading as the residents living during the heyday of the Avenue leave this earth.

A glimpse of the romanticized grandeur can be found just by considering the many nicknames of Indiana Avenue. Known informally as "the Avenoo, the Midway, Funky Broadway and the Grand 01’ Street," perhaps best formal designation of this street should be that of a "Black Entertainment Boulevard." Similar black strips with similar attributes and parallel histories could be found in Kansas City, Kansas at 12th and Vine, in Memphis, Tennessee on Beale Street, and in Louisville, Kentucky on Walnut Street. All these streets were segregated and were clearly visible to the outside population. Those visiting any U.S. city with a sizable African American population during the days of Jim Crow would find their way to one of these locations. This was the only place hospitality for blacks could be found. These communities were usually found near the railroad tracks.

Indiana Avenue was where Madame C.J. Walker, the nation’s first female millionaire, established her corporate headquarters. She was a renowned black woman, famous for the production and manufacturing of hair tonics. Most blacks were forced to live in the area during the days of segregation. Black Businesses lined both sides of this street. Some saw it as dynamic, while others saw only the ghetto slum.

It must have been understood during those days, that if one was a black resident of Indianapolis, one’s housing location had to be the Indiana Avenue community. It was an exciting community that eventually evolved into a rich culture and jazz hotspot. The Avenue’s heyday can best be described as a time when jazz prevailed in the style of "Bebop".

There was a life and death cycle concerning this community. The life probably started around 1900 when the first residents moved to the community. For various and sundry reasons however, the population dispersed and the culture faded. This community died a slow death. It eventually ended around 1960. The exact dates will be highlighted in this study.

The exact factors that caused this community’s death or radical transformation must be understood. Some say that open housing laws allowed middle class blacks to move out. As a result, businesses began to disappear, having no viable market of support.

Others say the great entertainment that made this community famous began to cease. Many blamed the invention of the record as an alternative that provided entertainment in the home; one no longer needed to attend live performances at the clubs along "the Avenue." The jazz clubs slowly began to fade. Bebop jazz was being replaced by rock and roll.

What makes one community better than another? In the heyday, the area around Indiana Avenue was quite the community. It was a community filled with flavor, rhythm and a share of despair. The story of Indiana Avenue gives consideration to the question of "What does a great community lack or possess that contributes to the concept of greatness?" Indiana Avenue: Black Entertainment Boulevard, gets to the essence of these answers by tracing the full life cycle of a community, a community known nationally as a significant player in the American jazz story.

Indiana Avenue: Black Entertainment Boulevard is the story of how a community functioned, prospered, declined and revitalized. It is a story with great implications. On the one hand, this story is a localized history of a subculture. On the other hand, to understand the Indiana Avenue story is to understand how similar historical communities like Harlem in New York, Bourbon Street in New Orleans and Beale Street in Memphis functioned and developed. All these communities, like many more, had similar traits and parallel histories. These communities became known nationally as stops on a Chitterlings Circuit, a network of entertainment venues made famous due to Jim Crow and separatist laws.

Indiana Avenue is a story filled with social and political dynamics. This story gives insight into the development of jazz as well as how entertainment evolved along racial lines. The story of Indiana Avenue involves an astounding American era with deep implications for today.

C. Nickerson Bolden developed a passion for writing as a graduate student. As a result, Indiana Avenue: Black Entertainment Boulevard, was first published as a partial fulfillment of the Master of Community Planning degree awarded from the University of Cincinnati in 1983.

Born and raised in Indianapolis, Indiana, for undergraduate college, Bolden attended Boston University and majored in religious studies. It was while at Boston University where the late Rev. Dr. Martin L. king, Jr. had attended, that he was introduced to the love of history and the fire and fervor of the Apostolic church movement.

By the time he gained some work experience, it was clear to him that God had placed a distinct calling on his life for ministry, a burden for young people, especially those with discipline problems. He has labored tirelessly to reach them ever since.

He has founded a non-for-profit organization called Victorious Ministries that involves teaching geared to a hip-hop generation. Bolden has another a book detailing some of the many challenging situations facing youth of urban America called Bridging the Gulf: Understanding and Ministering to Urban Youths.

He has served as an adjunct faculty of various Indianapolis universities including Martin University, Aenon Bible College and IVY Tech State College. He has also been published in various weeklies and trade publications including the Indiana Herald, the Indianapolis Recorder, The Christian Outlook, Buffalo Criterion, About Time Magazine, Gospel Today, the Memphis Silver Star and the National Newspaper Publisher’s Association.