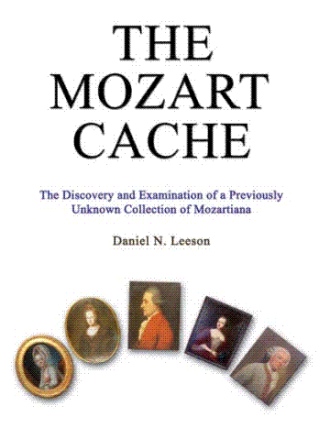 The bulk of what is termed “Mozart study” is devoted to an examination of his music and life.

Non-musical subjects that have a Mozartean facet, such as portraiture and relics, don’t occupy

much space in the Mozart literature. This is not a criticism but rather an observation about the

division of labor. Considering the subject, one could hardly expect the situation to be different.

life. In the current world of Mozart iconography, the knowledge of who painted what, and which

paintings are authentic is in an untidy state, not having had significant improvements since the

death in 1967 of the then leading Mozart iconographer, Otto Erich Deutsch. While there are

books dealing with Mozart portraiture, the newest and most comprehensive is almost 50 years

1 And though the age of digital technology is very much out of its infancy, the tools used to

than during the heydays of Georges de Saint-Foix and Alfred Einstein.

father of one of the world’s most supreme composers, died in 1787. At the time of his death, his

European tour of 1763-1766. Furthermore, it is likely that memorabilia and portraits collected in

the 21 years following that tour were also in Leopold’s apartment. There is little historical record

about what his collection might have contained at the time of his death, or what happened to it.

In 2003, an American antiques collector, traveling in Italy, bought what he thought were some

interesting pieces from a woman merchant. Though he was unaware of what he had stumbled

into at that time, these pieces now appear to have been a portion of Leopold Mozart’s estate. The

40 pieces in the acquisition. The telling of the story of each of the collection’s pieces and how they

survived for more than two centuries is rich with Mozart history.

Daniel N. Leeson’s undergraduate and graduate degrees are all in mathematics. Following service in the US Army during the Korean War, he began his career in 1958 as a mathematician, businessman, technician, salesman, systems engineer, and both a scientific and commercial programmer for The International Business Machines Corporation. Following his retirement from IBM after almost 30 years of service, he then taught mathematics at De Anza College in for an additional 15 years. During those 45 years, Leeson was also a professional performing symphonic musician, playing clarinet, basset horn, and bass clarinet with many professional organizations including the San Jose Symphony, San Francisco Opera, Oakland Symphony, San Diego Symphony, San Jose/Cleveland Ballet, San Francisco Midsummer Mozart Festival Orchestra, and many others. To occupy himself during the hours of travel and overnight stays during his business career, he began a self-study of musicology. He has published at least 50 technical papers in the Mozart Jahrbuch, Eighteenth Century Music, the International Journal of Musicology, the Musical Times, Music and Letters, Musical America, and other journals. He was also a writer of program notes for the London Proms concerts, the Salzburg Mozart Festival, the and San Francisco Symphonies, the San Francisco Midsummer Mozart Festival, and others. For the 1991 bicentennial commemoration of Mozart’s death, he was musicological consultant to the 's Mozart Festival in May, the Columbia River ( ) Mozart Festival in early July, and guest lecturer and performer at the Chatauqua Institute in at the end of July. Along with coeditor Professor Neal Zaslaw of Cornell University, Leeson edited the Neue Mozart Ausgabe volume containing the bulk of Mozart’s music for wind instruments, including K. 361, 375, and 388. He is the author of Opus Ultimum:

The Story of the Mozart Requiem (Algora Press, 2006), a novel entitled, The Mozart Forgeries,

(iUniverse, 2006), and co-author for one of the earliest texts on computer programming,

Basic Programming Concepts (Holt, Rinehart, & Winston, 1962). For ten years he was an officer and treasurer of the Mozart Society of America. In both 1992 and 1993, he was a faculty member of the Mozart Opera Studies Institute sponsored by and in . Leeson no longer plays professionally but he still contributes to musicological journals and writes fiction, mostly short stories, a number of which have been published.

For his writings he was awarded the 1992 Artist Fellowship for Writers of Creative Nonfiction by the California Arts Council. He is married to the former Rosanne Dryfuss of . They have two children and one grandchild. Leeson can be reached by email at dnleeson@sbcglobal.net. His website is www.leesonbooks.com.