We Thought We Were Invincible

The True Story of Invincible Warriors 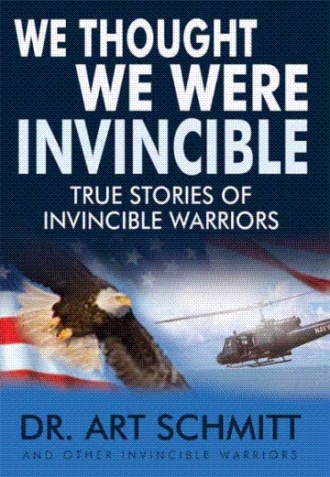 Warrant Officer Heidi Ungrich
US Army UH-60 Blackhawk Pilot
I am extremely fortunate in that I was selected for and completed Army
Helicopter training. Having completed two one-year tours in Iraq and am
going back again I have come through without any major incident.
One night I was flying over Baghdad. Rocket propelled grenades and
fifty-caliber machine guns were being hurled at me. Tracer’s from 50-
caliber machine gun bullets were coming at me. Every fifth bullet is a
tracer and looks like green basketballs coming at me. My question is,
where were the other four bullets going?
The whole sky lit up all over and all around my helo. I was too busy to
get scared at the mayhem.
All I could think of was that I was in the middle of a Star Wars Movie.

WE THOUGHT WE WERE INVINCIBLE

In the summer of 1970, I had the privilege of joining Detachment One of the United

Wolves (HAL)-3 in the Mekong Delta of . At that

time Dr. Art Schmitt was the commanding officer and was known as CDR. Art

Schmitt (or Uncle Art). Little did I know how fortunate I would e to serve under his

leadership in this truly unique fighting force of sailors.

of these seasoned combat veterans. Cdr. Schmitt led by example, always there at the

front, allowing his men to do their jobs to the best of their ability by giving them the

same respect as everyone else in our team. On every mission the possibility of

The mental strain on us was tremendous, yet there was never the slightest problem

manning those gunships, no matter how great the odds were against us. I flew 853

combat missions and Cdr. Schmitt is, without a doubt, the best officer I ever served

under. His experiences and other Invincible Warriors are well documented in this

book. “We Thought We Were Invincible, The True Stories of invincible Warriors”. 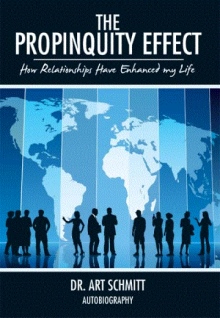 VIETNAMBy Nicole SmithCopyright 2007 Erin Nicole SmithUsed by permission Raging warIn a foreign landU.S. Soldiers Made a stand Many diedIn VietnamWas it right?Or was it wrong? Violent protestIn the streetAmerican citizensSaw defeat Nightly newsBrought the pictures homeRadio listenersHeard the songs Love and hateWar and peace60's chaosNever ceased Battered SoldiersFought and diedThe cost of freedomOh so high Strong emotionsIn the USASounds familiarA lot like todayhttp://www.authorhouse.com/BookStore/BookStoreSearchResults.aspx?SearchType=smpl&SearchTerm=Dr+Art+Schmitt The book chronicles stories of truly Invincible Warriors. Awoman Black Hawk pilot with two tours in Iraq tells the story how shethought that she was in A Star Wars Movie. The story of a Navy Corpman who served with Marines. His son is also a Navy Corpsman in Iraq. Harrison H (Jack) Schmitt, Apollo 17, one of the last men onthe moon. I was his instructor to get him checked out in Helicopters. He tellshis invincible story about a three hour hold on the mission and he took a napin the rocket before launching to the moon. Stories of many Vietnam veterans. Pilots, Doorgunners, River Patrol Gun Boat warriors (River Rats) and Navy SEALS. Admiral James Flatley, The former Executive Director ofPatriots Point tells his story of his invincible story of flying a C-130Hercules off of an aircraft carrier. Other Invincible stories of CTF-116 River Rats, River Patrolgun boats in Vietnam.A tribute to Helicopter Attack Light Squadron Three, doorgunners, crew and Pilots. A Vietnam Poem written by Nicole Smith , 14 years old, Mywife's Grand Daughter. We were all truly Invincible.

Dr. Art Schmitt was born in . During the Vietnam War he served with Helicopter Attack (Light) Squadron Three.  He was Officer in Charge (OINC) of a Seawolf Detachment at Sea Float/Solid Anchor on the in 1970.  Art served his country as a Naval Aviator for 22 years during which time he received The Distinguished Flying Cross, a Bronze Star, 21 Air Medals, 2 single action air medals, Presidential Unit Citation, Vietnamese Cross of Gallantry, and a Vietnamese air medal. He flew 808 Combat mission. Three in . Flew off of the USS Yorktown  in 1965 flying Search and Rescue missions into .  500 Carrier landings, Total Flight time 7400 hours.

Art received his Ph.D. from U.S.I.U. in in 1976. He was a registered psychologist in and and licensed Marriage Family Therapist in , and .  Art is a certified flight instructor to the NASA Space Program.  He is also certified to teach courses in counseling psychology, organizational development, military science, health and physical care services.  Art is a psychologist, lecturer, teacher, author, consultant, and has a commercial pilot's license.  He has worked in the corporate environment as a Vice President of Human Resources.  In 1988 he established his own business, Business Team Builders, a Human Resources Management Consulting firm.  One of his current contracts is with the Social Security Disability Administration where he acts as an Expert Witness.  Art is married and he and his wife Marilyn currently reside in

Also published,"A War With No Name, PTSD a Survivors Story, Dr. Art Schmitt and "The Man I Didn't know, The Stories of Wives and Families of Veterans Who suffer from PTSD, Dr. Art Schmitt, Co-Author, Marie LeDuc