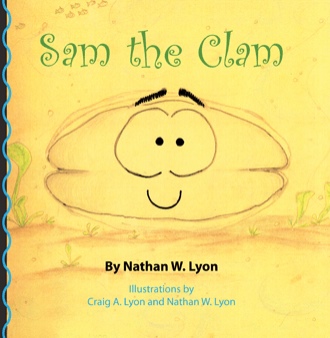 Seconds later, the guards returned with Mike. Mike was a large octopus who had jewels around his neck and rings on every arm. After telling Mike his story about the storm, Sam was loaded into a cannon.

“This is surely the way to get you home,” said Mike.

“Thank you both for being so helpful,” said Sam.

“Our pleasure,” they replied. “Now hold on tight. This should get you home.”

Sam closed his shell and readied himself. The fuse was lit.

"Sam The Clam” is an adventure-filled story of a young clam who gets lost after being swept away from his home by a powerful storm. Traveling through the big underworld of the sea in his quest to return to his family, Sam finds himself exploring new, and exciting places, plus, making some new friends along the way. Colored with vivid twists and turns, Sam The Clam shows us how fear and life’s challenges can be overcome with patience, friendship, and helping others.

Nathan wrote “Sam The Clam” in the mid-eighties while attending high school at H.B. Woodlawn in Arlington, Virginia. He holds a B.S. in Health Science from James Madison University as well as a Culinary Arts Degree from Le Cordon Bleu. Nathan’s career in television began on the second season of The Next Food Network Star, where he finished among the top four. He is the chef and host of A Lyon in the Kitchen (Discovery Health and Fit TV) and has appeared as a guest chef/expert on Home Made Simple (TLC) and Real Simple Real Life (TLC). Nathan is also the cohost, and chef, of Growing a Greener World (PBS), and soon, with the help of his family and friends, he will successfully complete his very first cookbook.

Having worked with local growers in California farmers’ markets for almost a decade, Nathan believes that good health and education go hand in hand, and that with the help of others, almost anything can be achieved.