TONY DUFFLEBAG ...and Other Remembrances of the War in Korea 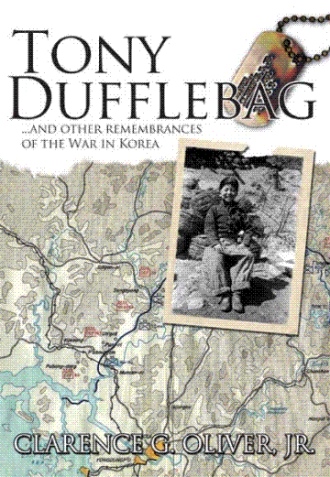 Tony Dufflebag— As we moved through the small villages scattered in the area north of Seoul on the way to the front, the extreme difficulties faced by the Korean civilians whose land was being ravaged by war became very clear. These people were struggling to survive. The plight of the small children tugged at our hearts. They were suffering most of all. Many of us riding in those trucks and Jeeps were fathers with small children back home. Seeing the poorly clad, cold and hungry children standing outside the huts or in the streets of villages reminded all of us soldiers of our own children back home There was a big difference, though. Our children in the United States were safe, secure, well fed, warm and properly clothed. Just the opposite was the plight for the Korean children. Our silent question was: “What would happen to these Korean children?” As our convoy of military vehicles rolled by, the observing people stared. The faces of the Korean children, for the most part, were blank of expression except for what could be detected in those dark, penetrating eyes. The eyes were wide open and observing everything. I could not forget the eyes. Our convoy of trucks moved closer to front line positions, far beyond the area where civilians were living. Darkness fell, and for the moment, any thoughts of children in distress were quickly replaced with the more immediate concerns of impending combat and the enemy troops occupying those mountains and hills now looming before us. At the time, none of us knew that some unusual circumstances soon would bring us into close personal contact with one of those Korean children who would steal the hearts of the men of Company C.

Stories told in the book, "Tony Dufflebag . . . and other Remembrances of the War in Korea," are a mixture of memories, history, journalism and autobiographical experiences that are blended into a fascinating collection. The title story is of the rescue by two soldiers of a six-year-old Korean orphan boy who was found freezing and starving on the streets in war-ravaged Seoul, South Korea, then secreted into protective “adoption” for a few weeks, and how he was cared for and won the hearts of all the soldiers in a frontline Infantry rifle company until he was placed in safer circumstances. The author shares feelings about the death of a fellow soldier, of thoughts about a young wife and son back home, of the dramatic mountain rescue of a critically-wounded friend, reflects on feelings of a Christian soldier in combat, tells about lifelong friendships that develop in wartime, reflects on personal values, beliefs, feelings, commitments, opinions and relates tales of humorous events that occur to and among soldiers, even in a far-off war zone.

Clarence G. Oliver, Jr., is Emeritus Dean and Graduate School Professor at Oral Roberts University, Tulsa, Oklahoma, as well as a retired superintendent of schools, an award-winning journalist, and a former United States Army Infantry officer. An officer and member of several state, regional and national organizations, he is active in church, community and civic work in his community and region. Oliver served as a Master Sergeant in an Infantry Rifle Company during the Second Winter Campaign of the War in Korea. He and his wife, Vinita, married 57 years, have three children, seven grandchildren and a great-grandson. The Olivers live in historic Broken Arrow, Oklahoma.