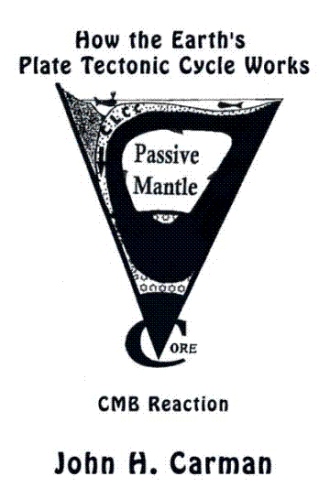 With the youth of the oceanic sea-floor (O-.3Ga) and the antiquity of plate tectonics (2-3 Ga) there can be little doubt that it is a cyclic system. Involvement of the earth's core is logical since it is the most energetic part and most likely plays a very central role. Heated expansion of the outer core against the passive resistance of the mantle with melting of the inner core too with 5cc/g make failure of the core mantle boundary certain whether at points or lines of weakness. The presence of densified silicate liquid in the core as it lightening element is new but unavoidable with its densification at 290 km to become the most dense nonmetallic phase of the lower mantle. A hypothetical three component system is used to illustrate the cycle from start to finish along with eruption as well as heat producing reactions at contacts during convection that cause it to expand, along with the melting at the inner-core boundary. Based on experimental data on synthetic MORB and PYROLITE compositions a quaternary reaction is proposed for the core-mantle boundary: Magnesium Perovskite + Calcium Perovskite + Magnesiowustite = Densified Silicate Liquid + Iron Liquid. This is a peritectic reaction because dLs likely contains some Fe203. MgPv is probably in its high pressure form, but I do not believe it has any bearing on the D" layer which I suggest is due to melting globally with more liquid at ULVZs typically under oceanic hot spots as 'wounds' from core ejections. It seems obvious that dynamics that produce the focus, intensity and reversals of the earth's core need reevaluation if! am correct about how the earth works.

The youth of the ocean floors (0- .3Ma) verses the age of plate tectonics (2-3 Ma) suggests strongly that plate tectonics is cyclic. Densified silicate liquid(Ls) at about 290km depth suggests that it could be the ingredient that lightens the outer core as well as an active ingredient in its activities along with lower mantle phases high density magnesium provoskite (MgPv), calcium perovskite (CaPv), magnesiumwustite (Mw), iron(Ir) and iron liquid(Lm) plus isobarically and isothermally invariant liquid phases. Unstable convective contacts among these phases at all levels produce heat as they tend toward stable equilibrium. This heat expands against the earth's mantle and even causes the inner core to melt with 5cc\g. Eventually, the core-mantle boundary fails along lines and / or points to allow for the exit of densified silicate liquid. This liquid reacts with the lower mantle to produce unique liquids FOZO for oceanic island basalts and C-Component for the ridge and rise basalts ofthe Atlantic, Indian and Pacific oceans. It is thought that these ejected liquids react to form hot solid plumes of low viscosity that ascend to 290 km where they melt on decompression to basalt that ascends further to create oceanic crust. Sea-floor spreading followed by subduction to the earth's core where the cycle ends to begin... again and again. A hypothetical ternary system is used to illustrate the cycle from beginning to end. Experimental evidence indicates that the core-mantle boundary may be as simple as a quaternary reaction:

Born in 1935 north of in Allison Park, John was educated at , got his B.S. at , his M.S. at New Mexico Tech and his Ph.D. at Penn State Universily in 1969. His experience in experimental petrology stated with the study of the effects of cooling on the physical properties of blast furnace slag with J. C. Griffiths. Then he was fortunate to come under the creative and inspiring leadership of O. F. Tuttle where he worked on silica in calcic-alkali feldspars and other systems at PSU and Stanford University where he helped build and run Stanford’s Experimental Petrology Lab and finished his work on the NaAlSiO4-Mg2SiO4-SiO2-H2O at high temperatures and pressures, explored its petrologic implications, ran other projects and helped visitors with projects. The stability of Sodium Phlogopite and its two hydrates were documented and published but that of stability of glaucophane, anticipated from a previous study, was not. Research and teaching at The University of Iowa, PSU, UCLA, Knox College, Goddard Space Flight Center, The Geophysical Lab of Washington D.C., The University of WS-Parkside, Radford University and especially VA Tech combined to delineate the low temperature-high pressure stability of glaucophane with Charles M. Gilbert, but also crucial help from Art Montana and Hatten Yoder Jr. was obtained. John has also labored at numerous other jobs from construction, to shrimping, to longshore handeling of TX long grain rice, to concrete work, to teaching in junior- and senior high schools in TX, and a time or two of homelessness. He has even been jailed several times, but never been involved with criminal violence or thievery. He lives in with his former wife Carol. He has four children from a former marriage and eight grandchildren. I can be contacted by e-mail at drjohnhcarman@gmail.com for comments, corrections, questions and suggestions. He is also founded a not for profit company called Care-Man Enterprises for works that benefit mankind when ever and where ever he senses the need --toward a HEAVEN on earth where for him HEAVEN is a acronym for Haven All-ways Equilibrated Verily Evil Nowhere.